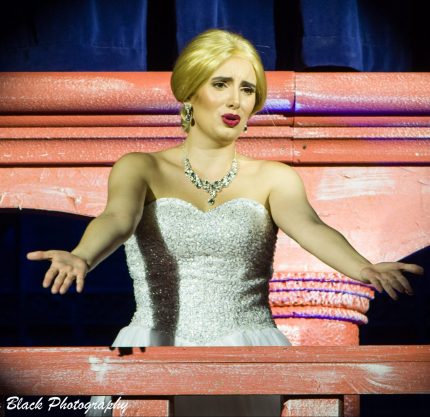 A particular virtue of theater is that the passage of time — from a piece’s inception to its latest re-revival — only underscores ‘inherent greatness’ by its continuing relevance, even its painfully escalating resonance despite evanescent decades.

Different facets may seem boldfaced as years pass and varied artistic interpretations are inserted by the audience and the artists. But when the material is literally transcendent, great theater is great theater.

So when the political player at the center of a 1978 musical is a conscienceless, ambitious, charismatic and manipulative “populist” with a media background, 2022 audiences should be forgiven for hearing deafening echoes in the Andrew Lloyd-Webber/Tim Rice/Harold Prince’s masterpiece Evita at Pembroke Pines Theatre of the Performing Arts.

Without changing a word or a note, this solid outing insolently jabs the ribs of a contemporary audience’s vulnerable socio-political conscience. The basic story is how a young Eva Duarte maneuvered her way bed-by-bed from rural poverty to become the powerful and worshipped wife of Argentina’s dictatorial leader, Juan Peron.

But Rice’s lyrics brim with a baked-in razor-sharp cynicism about absolute power, corruption, duplicity and the ease of duping an all-too-willing populace yearning for a savior who promises to solve their ills. It’s a battering assault seemingly written last week.

Our acidic commentator/narrator, Che (not Guevara) sneers,
“Instead of government we had a stage
Instead of ideas, a prima donna’s rage
Instead of help we were given a crowd
She didn’t say much, but she said it loud.”

In the iconic “Don’t Cry For Me, Argentina” scene, Eva swathed in a glittering gown and jewels, tells the mob of plebian descamisados that:
“And as for fortune, and as for fame,
I never invited them in,
Though it seemed to the world they were all I desired.
They are illusions,
They are not the solutions they promised to be.
The answer was here all the time,
I love you and hope you love me.”

All that is impossible to ignore as PPTOPA, a longtime community theater, once again nudges the overall achievement level of its professional status another few notches thanks to three fine central performances, overall direction by Geoffrey Short, musical direction by Irma Gloria and choreography by Del Marrero.

Of course, any production’s success relies on having an inherently magnetic actress to convincingly walk a line so intentionally murky that you can never be quite sure from moment to moment whether Eva was a manipulating calculating con artist, or did she believe her own constructed exterior? Add into the mix another three or four possible through lines such as becoming a captive herself of the narcotic of adulation.

The closest Lloyd-Webber and Rice allow us a peek inside is the delightfully exercise in polite nastiness “Waltz for Evita and Che.” Che accuses Eva of using the Argentine people for her own ends, while Eva cynically replies that there is no glory in trying to solve the world’s problems from the sidelines.

It’s relatively easy for a talented actress to play any of these subtexts and exteriors individually, but to play them simultaneously and intentionally leave you wondering even after the show ends, that requires a fine actress.

Fortunately, PPTOPA has an inarguably strong Evita in Gabi Gonzalez, a New World BFA grad fresh from traveling around the globe performing with Oceania Cruises and listing a parade of lead roles in her resume.

Among her highlights, of course, is her evocative phrasing of “Don’t Cry For Me, Argentina,” a song mis-covered by a hundred nightclub songstresses who butcher its meaning much as they do the title song in Cabaret. But Gonzales appropriately makes it a spell-binding seduction of the masses — a chilling portrait of a supremely skilled demagogue. You’d buy it, too, if you hadn’t heard her maneuvering her antsy husband in “A New Argentina.”

Peron (or Che in various mountings) sings:
“How annoying that we have to fight elections for our cause
The inconvenience, having to get a majority
If normal methods of persuasion fail to win us applause
There are other ways of establishing authority.”

PPTOPA is maintaining its usual schedule of Saturday matinees, so following the long tradition dating back to Elaine Paige and Patti LuPone, Evita is played those afternoons by Mariangeli Collado.

Playing her adoring partner in crime, Joshua Roland-Bramkamp doesn’t look a thing like the real Juan Peron, but his commanding baritone put across the interior spirit of a man both supremely confident on the outside, anxious on the inside and thoroughly corrupt with self-interest. 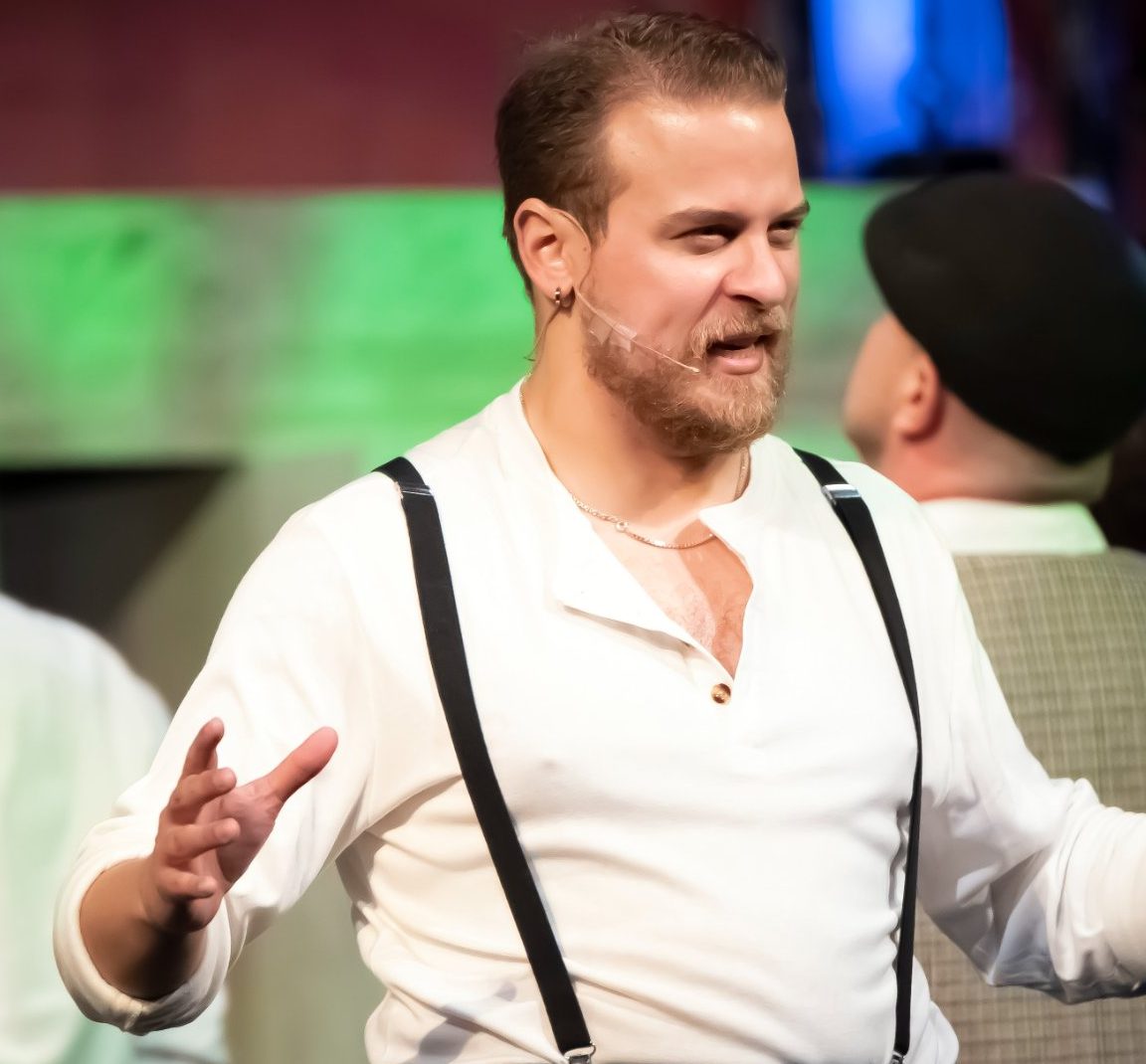 But backing into the most welcome news is that Sahid Pabon, a young actor who has populated a score of musicals and plays in the region but rarely as a lead, finally gets in Che a role he can nail to the wall. He unreels intense acting chops and a wide tenor range in music scored by a sadist. As the sardonic commentator, he exudes the demeanor not of a revolutionary – in Che’s mind this cause is lost – but of someone whose fury is the betrayed disillusionment of the once hopeful.

In the supporting roles (and otherwise generously part of the ensemble), Austin Gardner throws his sonorous voice into Agustin Magaldi, the showboating entertainer woven through Evita’s life, and Shalia Sakona as the young mistress that Evita evicts, giving her the mournful solo “Another Suitcase in Another Hall.”

The original staging by Prince has never been bettered and it is pretty much inextricably merged into the script such as the musical chairs of “The Art of the Possible.”  But Short adapts it and finds his own visual language. One such interesting touch: When Che is dragged off by the secret police late in the first act, he frequently clutches his side when he returns throughout the second act.

A side of applause for Brooke Geraci, listed as the sound operator, for finally conquering the miserable acoustics of PPTOPA’s home auditorium and carefully balancing the digitized music and the lyrics of the singers.

Sure, some of the costumes don’t fit the ensemble. Some of the dancers are knife sharp; for others, movement is not their strong point even assigned simple choreography. There are plenty of ways you could carp.

But the overall impact is an intriguing cautionary fable that dares today’s audience to sing along with The Who “Won’t Get Fooled Again.”

Evita by the Pembroke Pines Theatre of the Performing Arts plays through August 7 at the Susan B. Katz Theater of the Performing Arts at the River of Grass ArtsPark, 17195 Sheridan Street. Performances 8 p.m. Friday-Saturday, 2 p.m. Saturday-Sunday. Running time 2 ½ hours including 20-minute intermission. Tickets generally $17-$34. For more information visit www.pptopa.com or call (954) 437-4884.