George M Delivers The Razzle Dazzle Plus A Little Insight 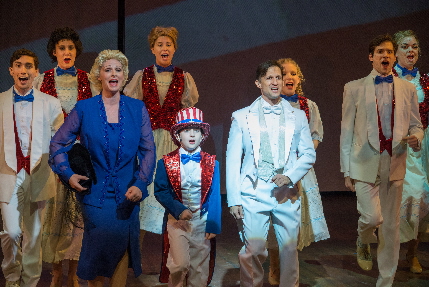 Scott Leiendecker in white as George M. Cohan leads the cast in “You’re A Grand Old Flag” in The Wick’s George M / Photo by Richard Booth

A commendable if offbeat facet of America’s character, even in this Independence Day season, is our ability to see the flaws in the American Ethos even as we absolutely and wholeheartedly celebrate it. One of the best examples has been any look at the life and career of master showman and poster boy for the pursuit of the American Dream, George M. Cohan.

George M is a razzamatazz, flag-waving, tuneful, toe-tapping, tap-dancing bio-revue tailor-made for the target audiences embracing its current revival at The Wick Theatre.

But written in 1968 as the world was changing, it also depicts the hero’s drive that ran over people closest to him, his boundless self-confidence that toppled over into arrogance, and a need for adulation that quickly jettisoned anything but unquestioning support. In short, if you can take a step or two back, George M intentionally or unintentionally forces us to see the duality of that can-do optimism and post-Manifest Destiny confidence that made us the leading power for much of the 20th Century.

All of this plays against a greatest hits song-and-dance soundtrack of “Give My Regards To Broadway,” “Over There,” “You’re A Grand Old Flag” and “Yankee Doodle Dandy.”

The piece is precisely up the parade route of Norb Joerder, one of the Wick’s stable of regular director-choreographers responsible for 42nd Street and Oklahoma.

The Wick ostensibly is staging a concert version of the show with some sections condensed a bit through very minimal narration provided by Susan Powell, Miss Oklahoma 1980 and Miss America 1981. But don’t look for scripts in hand and music stands. The Wick has 21 actors and dancers in period costumes performing long book scenes and tap-dancing up showstoppers at the slightest music cue. The sole nod to limited finances is the use of canned music and minimal set pieces along with projections.

For publicity purposes, Powell gets top billing on the posters, but she has little to do but be charming and lend her lovely operatic soprano as Broadway star Faye Templeton trilling the standard “Mary” – and lead the audience in a sing-along on a latter chorus.

The real star is Scott Leiendecker in the title role. Without a human magnetic field in the part, no one should attempt the show in the first place. No problem here. Leiendecker’s tenor can seem a bit thin and forced at times, but no matter; Cohan’s reputedly wasn’t all that strong either. Leiendecker owns the charisma, energy and terpsichorean talent to drive the show. Wisely, he doesn’t try to channel James Cagney’s cinematic Cohan or Joel Grey’s Broadway performance, and it’s different still than the indefatigable power that Jon Peterson brought to the Broward Stage Door last spring in George M. Cohan Tonight. But he exudes Cohan’s requisite cocky brashness and grinning certainty that everyone will forgive him because he’s a winner. He is also is complete sync with the writers’ vision that Cohan was the embodiment of the admirable and unsettling turn of the century America as vaudeville gave way to legit theater.

Weaker productions in the hands of lesser talents than the consummate veteran Joerber and Leiendecker have exposed the truth that the show doesn’t quite work: It’s hard to thoroughly satisfy audiences coming expecting a consistently upbeat show and find the hero is not as unassailable as they erroneously recall Cagney was in the 1942 Yankee Doodle Dandy.

Working to overcome that is the spirited and talented cast. The most notable is veteran James Young as Cohan’s father, Jerry. In a corps of accomplished and evolving dancers, he gives his every scene a professional spit polish and extra bit of topspin that makes him stand out. Joining him are Aaron Bower as Cohan’s mother, Eliza Maher as his sister, Kelly Ziegler as his second wife, and Amelia Millar as his first wife.

George M was produced in 1968 to capitalize on the growing popularity of Grey, an inspired choice just off Cabaret. It featured as his sister Josie, a quite secondary part, an unknown young thing named Bernadette Peters. The consensus was that Grey, director-choreographer Joe Layton and the music were well worth savoring but the show itself, especially the book by John & Francine Pascal and Michael Stewart (Hello Dolly! and Carnival) were mediocre.

One interesting note: The welcoming prologue delivered by Ms. Powell genially acknowledges that most folks in today’s pop culture don’t recognize Cohan’s name and that most of the troupe of twenty-ish performers on stage hadn’t either, and this show was meant to help correct that. I asked Joerder during intermission from whom and where did that very apt prologue come from? It was written by the original authors for Grey to deliver in 1968.

George M is The Wick’s first foray in a summer show and is slated to be followed by Peter Pan from Aug. 6-30.

Note: Because of the complimentary but compulsory valet parking, The Wick has wisely put ice water near the valet stand and is presenting some sterling performances by Lindsey Johr and Leah Marie Sessa in the lobby after the show while you wait.