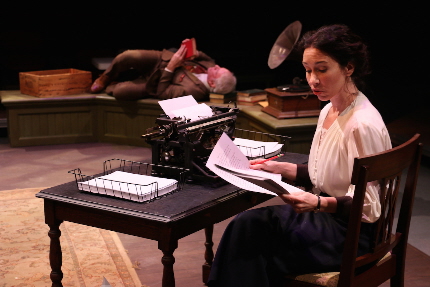 Riverside Theatre turns down the volume and ratchets up the intellect in its production of Ghost-Writer, performing now on the Waxlax Stage.

It is a slow, studied play and production with a strong emphasis on restraint. In fact, it’s not until a final lighting cue that the audience may feel the most thrilled.

Written by Michael Hollinger, Ghost-Writer is set in 1919 and is a mystery examining a number of themes, including: The exacting world of writing, the metaphysical, the disregard of a woman’s own creative voice, and finally romantic awakening in an era of restraint.

In it, handsome and famous author, Franklin Woolsey hires prim bookish secretary Myra Babbage to type what he dictates. Her hands fly like busy bees over the keys. A discussion of a semi-colon versus a full stop soon ensues and she becomes immediately invaluable to the novelist.

Their relationship richens. Myra knows instinctively what he is about to say and will finish his thoughts on paper before he dictates them.

Not pleased with this relationship is Woolsey’s wife, Vivian, a woman with confidence and curves to spare. Although pleased that Myra is not as womanly as she, Vivian nevertheless is bothered by their special relationship and assumes a watchful eye.

Hollinger immediately establishes that Woolsey dies and that Myra is speaking to an unseen fourth character, a bit evocative of  A Telltale Heart. And indeed, like that Edgar Allan Poe classic, this unravels slowly… oh so slowly … yet certainly not as grimly. But we do come to learn that she believes the author’s spirit dictates to her in the quest to finish what will be his greatest work.

But make no mistake, this is not Noel Coward’s Blithe Spirit filled with an interloping presence.  Indeed, the “ghost” haunts like all those who have left our lives.

“What is a ghost but a vivid memory appearing when we least expect it,” Myra says.

What fills this drama is the recollection of the author/secretary/wife relationship and the revelation of the power of the creative force all wrapped up in painful Edwardian restraint.

We are left with the question: Is her writing indeed metaphysical or, more probable, the work of a gifted woman whose voice would have been silenced in 1919.

This deliberate, studied exploration of character is common to Hollinger’s other plays, including Opus, which concerns a string quartet, and An Empty Plate in the Café du Grand Boeuf, which concerned in part Ernest Hemingway and had a glorious production at Riverside Theatre two seasons ago.

But if you thought you had to pay attention with those two plays, and perhaps know a bit about classical music and literary allusions to reap the riches, you’ll have even more to do here.

As it is from the point of view of Myra, this one-act play turns into a dramatic etude. The audience must stay alert, read between the lines, observe the nuances (in lighting and costuming as well), listen to the eloquent silences. Only then will you cash in on the payoff as the play eventually accelerates, landing you in the lap of joyful creation and then pulling you back again into proper decorum.

As Myra, the petite Robin Abramson is a powerhouse. She maintains the formality of the period while summoning up an abundant but restrained emotional core as well as typing wizardry. (Throughout 90 minutes of ultra fast typing, she jammed the keys of the ancient typewriter only once, but the actors were at the ready for such an occurrence.)

Brian Sutherland brings to the stage a tender, well-rounded portrayal of Woolsey, turning him into such a romantic soul, yearning, perhaps finding, but never acting on what is in front of him except, perhaps, in a ghostly form.

Director/scenic designer Allen D. Cornell sets the production in the round, amplifying the idea that the audience is examining the relationship and the truth at its core. As Cornell did with An Empty Plate, he employs a pristine director’s style. He maintains a slow, steady pace to the production, putting at front Hollinger’s carefully crafted play and Abramson’s tour de force performance.

Lighting designer Sarah Jean Elliott gives exquisite poetry to the pacing here, establishing the sense of a gathering storm, which is the story’s central metaphor. The shadow of clouds moves across Myra’s face in time with her testimony, as it were, as the storm threatens to open up and pour. Elliott’s final lighting touch will steal your breath away.

Hollinger said in a recent interview with DC Theatre Scene that he was inspired to write the play by his mother’s death in 2006 and how his father was adjusting to “the hole that my Mom left behind.” He was further influenced by a story about the history of the typewriter in which he learned about Henry James’ secretary Theodora Bosanquet claiming that she had finished James’ last book after his death.

Ghost-Writer certainly stays true to what Hollinger refers to as the “presence of absence.” It is taut, with precise, writerly language. And although it demands careful attention from the audience, Ghost-Writer will satisfy those who like more exactly wrought drama that sets the stage for examination and discussion.