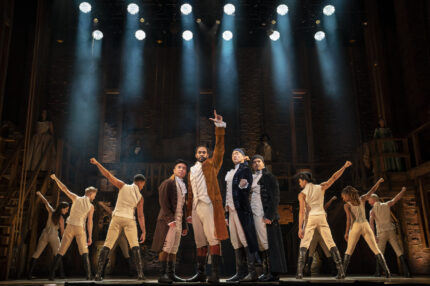 Has the mega-hit musical Hamilton chronicling the United States beginnings through the life of the eponymous historical figure lost its sheen since it opened in 2015 before embarking on numerous national and international tours?

Hamilton, now playing through Dec. 11 at the Broward Center, definitely retains that original shine that made it the hottest ticket on Broadway and on tour. But this rendition actually is a stronger production, full of energy with a fresh veneer.

The choreography by Andy Blankenbuehler seems crisper, the scenery more effectual, the costumes more flowing, or in some cases with the ensemble, more effective. This Broadway Across America production also seems to have more wit and bits of business added. And the voices, with few exceptions, more powerful.

This is a Hamilton that definitely rises up.

This starts from the moment Aaron Burr (Josh Tower) begins to recount the story of Alexander Hamilton who became one of the United States’ Founding Fathers.

Whether you’ve seen Hamilton four or five times, as I have, or regularly watch the Disney+ version as does my 18-year-old companion, don’t throw away your shot to see Hamilton at the Broward Center. You definitely want to be in the room where this happens. I am pretty sure that the two women who came dressed as King George and as a Revolutionary had seen Hamilton multiple times.

Edred Utomi is even more commanding as Hamilton than he was when Hamilton last played in South Florida in early 2020, before the pandemic shut down everything. Utomi is the charismatic, driving force of the production, delving into the arc of Hamilton as he grows from a young orphan with dreams to a powerful visionary.

Attention also must be paid to Tower’s rousing Burr, whose obsession and unbridled ambition are the foundation of the story; Carvens Lissaint as a commanding George Washington and the scene-stealing Bryson Bruce as the wry King George. David Park makes the most of his Thomas Jefferson but is practically unintelligible as Lafayette, a chronic problem with whomever plays this French character.

Alysha Deslorieux, Cherry Torres and Yana Perrault are fine as the Schuyler sisters as are Jared Howelton as John Laurens/Philip Hamilton; Tyler Belo as James Madison; and Adriel Flete as Charles Lee. The production is supported by a tight band.

Lin-Manuel Miranda’s sung-through Hamilton is truly a masterpiece—a term not used lightly. While I enjoy Miranda’s In the Heights, his Hamilton reaches that nirvana that few composers achieve, aside from the late Stephen Sondheim. It’s brilliant-level thinking on Miranda’s part that he would see potential for a musical after reading the 2004 biography Alexander Hamilton by Ron Chernow. That he would see resonances between Hamilton’s life and the creation of the United States with that of today’s multi-cultural society. That his vision wouldn’t be like any other musical—it would use rap, hip-hop, jazz, bits of Gilbert & Sullivan, allusions to South Pacific and more. That his musical would take subjects drier than toast, like the National Bank, and create a debate akin to def jam.

At the 70th Tony Awards, Hamilton received a record-breaking 16 nominations and won 11 awards, including Best Musical. It received the 2016 Pulitzer Prize for Drama.

Miranda also took chances to show the multiple dimensions of Hamilton. The musical is called Hamilton, but that doesn’t mean he is always a hero. Miranda shows a man who is arrogant because he knows that he truly is the smartest person in the room, runs afoul of just about everyone and isn’t as connected to his family as he thinks he is.

So, yeah, Hamilton is a masterpiece.

Hamilton plays through Dec. 11 at the Broward Center for the Performing Arts, 201 SW Fifth Ave., Fort Lauderdale, as part of the Broadway Across America-Fort Lauderdale. Visit BrowardCenter.org or call (954) 462-0222; orders for groups of 10 or more call (954) 660-6307. Running time approximately two hours, 30 minutes with a 15-minute intermission. Prices range from $49 to $189 with a select number of premium seats available from $229 for all performances.  There will be a lottery for 40 $10 seats for all performances. For details, visit http://hamiltonmusical.com/app

This entry was posted in Performances, Reviews and tagged Broadway Across America, Hamilton. Bookmark the permalink.