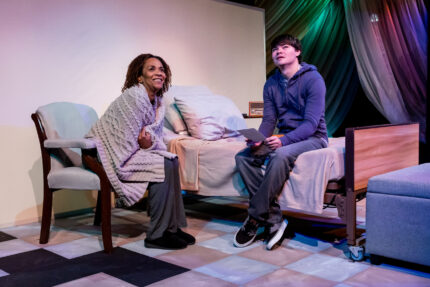 In a time when so much theater and film seem dependent on sling-shots forward at crucial moments by unexpected left turns of plot and character, there’s a quiet life-affirming pleasure in a work that follows precisely the arc you expect from its familiar telegraphy.

There are few surprises in the world premiere of E.M. Lewis’ Dorothy’s Dictionary at Theatre Lab – a warm and poignant celebration of words, books and bonds between people who love them.

But the fact that you can see nearly every development coming is, instead, a satisfying virtue since it is set against a world of uncertainty and mortality. Aided immeasurably by Matt Stabile’s nearly invisible direction and heartfelt performances by veteran Karen Stephens and young Elijah Moseley, you never are being intellectually or emotionally short-changed.

Indeed, spending time with Lewis’ two characters is reason to savor their slow exposure of pains and challenges, and their finding some comfort in making an unlikely connection.

Zan Hardt, a teenager with a dry smile, enters the spotlight to tell us a story about how his life was changed in a story with 12 chapters. He had beat on a schoolmate 17 times and was offered the choice of juvenile detention or three months of community service.

He agreed with extreme reluctance to three visits a week with Dorothy Ross, a 45-year-old librarian laid up in a convalescent home. Zan makes no secret that he doesn’t want to be there, especially when Dorothy, whose eyesight is weakening, wants him to read to her from her large warren of books piled in her room. He is initially sullen, resentful and not especially forthcoming.

But Dorothy, who is likely in cahoots with the sentencing judge, is an eminently likable independent spirit who has been dealing with young people much of her career. She exudes a gentle humor, such as telling Zan that she is really a troublemaker – someone who presses the call button too often for her nurses’ liking.

At her behest, he picks the first book that seems interesting;  he’s clearly not much for books and has never been to a library: The Old Man and the Sea – because it has a boat on the cover and he has some interest in boats.

Of course, their slightly flinty relationships grows and deepens – personal details like Zan’s never-home father and the precise severity of her illness are shared sparingly because neither wants prosaic sympathy.

At one point, when he stays with her beyond the call of duty, he tells her haltingly, “I like being with you. You’re the first person in my whole life who actually, like, listens to me. You listen to me. Not just when I’m reading to you.”

A key indicator of their relationships is that when she uses a word that he doesn’t know – such as equivocal – she makes him look it up in her well-worn dictionary.

It’s also indicative of the joy of words that Lewis threads through the play and the couple’s growing relationship.

When he wants to look up a word on his phone app, she admonishes, “You lose all the ancillary benefits.… Ancillary! Ancillary. Like flying instead of taking the train. It’s efficient. But there’s so much that you miss. When you look up a word in the dictionary, you see the words that are nearby, which might be interesting in their own right. Epistemological. Epoch. Epiphany.” Or words that have the same root as the word you’re looking for, and might be related somehow…. Or words that are interesting in their own right, that you’ve never encountered before. And never would know to look up, but enrich you.”

Earlier, when he is having trouble reading Shakespeare’s iambic pentameter aloud. She remarks, “You start to feel the rhythm of the language after a while. Like listening for the beat of the music when you’re dancing. Is it a waltz or is it a foxtrot?”

She gets him to visit others in the home. He begins reading on his own – talk about diving into the deep end —Moby-Dick, ostensibly because it’s set on the ocean and he kas never seen the ocean, which is only two hours away.

And, of course, no spoiler here, her health begins to crater with no hope of recovery. So the play eases into contemplations of health, illness and imminent death – but at the same time as Zan is coming out of his self-imposed hermitage.

The narrative lines are clearly marked with foreshadowing signposts that only underscore the inevitability of the future for both characters and their development. The underlying strand is finding and reveling life in the face of death.

The much-honored Lewis has been developing the script for some time in readings and the like. She is a solid hand at constructing stories that quietly work their way into the audience’s emotions via appealing characters.

The play or the production has one weak point. There is a kaleidoscopic “chapter” meant to show the characters’ evolving relationship in two- and three-line vignettes that would work fine as a film montage but feels herky-jerky live on stage.

Stabile has a sure hand guiding this journey, but Lewis’ characters are private proud people accustomed to shielding their vulnerabilities, pain and fear from others. As a result, the sole facet missing is a little bit more friction, a little more electricity to push the story along.

Moseley, a BFA grad from Florida Atlantic University where Theatre Lab is based, delivers a solid job, especially in creating Zan at a discernably different place in his maturation as the narrator than as the troubled teenager.

Stephens, one of the region’s best actresses, once again gifts the audience and Lewis with a fascinating believable heroine who you yearn to spend time with yourself.

Thanks to Lewis, Stabile and Theatre Lab’s season-long commitment to world premieres, you do get the chance.

(Note: Theatre Lab will be collecting books to benefit the Literacy Coalition of Palm Beach County and the Little Library of Lake Worth. Drop off a new or gently used book when you come to see a performance. There also are talkback discussions after some performances.)

Dorothy’s Dictionary runs through Dec. 11 from Theatre Lab, performed at the FAU campus in Boca Raton.  Performance times are 7:30 p.m. Thursday-Saturday, 3 p.m. Sunday.  Running time is about 70 minutes with no intermission. $20-$45 for adults. For more information and tickets, visit https://fauevents.universitytickets.com. Or call (561) 297-6124