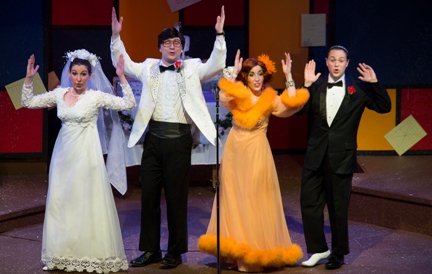 “Hello Muddah, hello faddah; here I am at Camp Grenada.” The musical based on the name of Allan Sherman and Lou Busch’s 1963 novelty tune is about as silly as the song it’s based on.

Yet despite its almost two hours of one-liners, caricatures and Borscht Belt humor, the current show at Broward Stage Door, in all its campiness, is energetically enjoyable. What Douglas Bernstein and Rob Krausz have done is taken Sherman’s parody music from the 1960s, and conceived a storyline around the tunes, which works surprisingly well. Bernstein and Krausz’s show was first staged in New York at the Circle in the Square Theater on Bleecker Street in 1992. Broward Stage Door presented Hello Muddah, Hello Faddah in 2000.  The staging was successful 14 years ago, and they’ve done it again. You’ll laugh, you’ll cry comic tears, you’ll leave the theater salivating for anything on rye from a Kosher deli.

In 1962, Sherman released My Son, The Folk Singer, a parody record that used the music of such songs as Battle Hymn of the Republic and Frère Jacques, turning the tunes into riffs mostly on Jewish culture. For those of us from a later generation, Sherman was the original Weird Al Yankovic.

Hello Muddah, Hello Faddah: The Allan Sherman Musical weaves Sherman’s entertaining songs around a fictional story. We witness the life — from birth to old age — of Barry Bockman, a Jewish-American man, who, of course, at one time in his life spends time at Camp Granada. There are bris jokes (“Foreskin and seven years ago“) and religious jokes (“The Cantor Berry Tales“). There is commentary on marriage, suburbia, the American Dream, growing old and early bird specials.

On each side of the stage, placards built into the walls signal the eras of Barry’s life, and are reminiscent of something out of a Mel Brooks movie. (Heck, Brooks was cinema’s Allan Sherman, wasn’t he?). Scene 1: He is Born, Scene 2: He Learns, Scene 3: He Leaves Home, Scene 4: He Grows Up, and so on and so on until …He is Old. You get the gist.

Barry’s first love is his first friend — Sarah Jackman (pronounced Jock-man). Our first introduction to Sarah is when the two are babies. Played by the actors who are the adults, Barry and Sarah (James Parks and Eva Marie Mastrangelo), Barry calls Sarah on the phone; their conversation is sing-songy in the tune of Frère Jacques:  —Sarah Jackman, Sarah Jackman, How’s by you?
— How’s by you?
— How’s your brother Bernie?
— He’s a big attorney.
— How’s your sister Doris?
— Still with William Morris.”

The two meet cute in One Hippopotami to the tune of What Kind Of Fool Am I, a tale of twos — animals, people and doctors (“When Dr. Joyce Brothers meets Kildaire that’s called a paradox”). At the couple’s wedding, Sarah’s father gives the rundown of how he met his wife Sheila, in Harvey and Sheila, sung to the tune of Hava Nagila. At times, though, it’s a stretch for the storyline to actually fit Sherman’s lyrics — an obituary sparks a song about a fabric maker for The Ballad of Harry Lewis (Battle Hymn of the Republic), which doesn’t quite work.

Sherman’s talent and lunacy is really what comes to the fore in this inventive musical revue. Director Dan Kelley knows exactly how to pace his actors in their handling of  the comic lyricist’s quick turns of phrases, and how to punch up the many musings on modern Jewish culture. With so many scenes and multiple characters coming in and out, Kelley keeps what could be mass chaos into a funfest of controlled frenzy.

The cast, especially the secondary characters, are called upon to play multiple roles. Ryan Halsaver, Shane R. Tanner and Sarah Sirota play almost two dozen characters collectively. Tanner is the standout, especially in his role as the over confident Uncle Phil, everyone’s annoying relative, who returns to haunt even after his death. Halsaver seems less confident as the stuttering teacher, Mr.Kalodner, but really cuts loose dressed in drag as a female department store shopper hunting for bargains. He’s also completely comically engaging as a man who actually encourages his wife to get bigger by the minute in the very funny Grow, Mrs. Goldfarb.

Sirota has to wear multiple hats (literally) and manages to create female characters that each have their own signature – a difficult task with the roles she’s given, which could, the way they are written, all end up sounding and looking the same.

But it’s Parks and Mastrangelo who are so wonderfully honest in their portrayals of Barry and Sarah that you really care how their lives end up. The two create characters that actually take shape from beginning to end. When Sarah is longing for her husband and worried about her daughter’s late nights, your heart goes out to her. Later in life, as Barry wonders how he ended up in the suburbs and how he’ll please his boss, Parks’ Barry has depth and emotion.

Musical director David Nagy, who also conducts and plays keyboard in the three-piece band placed high above the stage, which includes Martha Spangler on bass and Brian Sayre on drums, gets credit for ensuring the cast maneuvers Sherman’s multiple and sometimes difficult lyrics. Kudos, too, to Colleen O’Connell’s many costumes that have to cover the decades, and Ardean Landhuis’s lighting, which also helps with the moods of the settings and time periods.

The musical revue itself is inventive and the production at Broward Stage Door couldn’t do a better job of making Hello Muddah Hello Faddah a heckuva fun ride. The show, for all of its slapstick, is something to write home about.