Intoxicating Once Is Immersive Theater; Tour Is A Must See 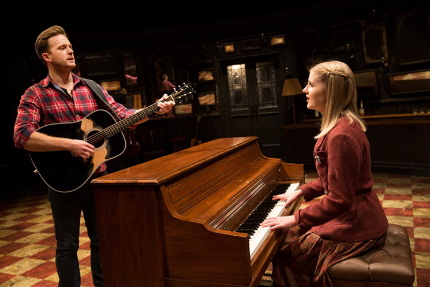 The musical Once now at the Broward Center for the Performing Arts, part of the Broadway in Fort Lauderdale series, is one of those immersive theater experiences. It’s supposed to be and it is. It’s a love story about music, muses, heartbreak, discovery, and how humans relate on many levels – as families, as wives, mothers, daughters, brothers, sons, and neighbors.

Once is based on the 2007 Oscar-winning film about a singer-songwriter named Guy, who lives in Dublin, Ireland. He’s brooding and depressed after a breakup, so much so that he wants to give up his dream of being famous. Yet he’s so good, he could very well be the next Bono. He’s hanging up his guitar and resigned himself to living in a small flat with his father above the Hoover vacuum cleaning store where they both work. When he meets up with a Czech immigrant (she’s only referred to as Girl in Playbill notes; I can’t recall her every being called by name in the play) musical sparks ignite. She plays piano. She’s pretty. She’s lonely, too, but she has a reason to remain unattached, no matter how much she begins to fancy Guy.

It is a guy meets girl love story, but there’s something compellingly different about this once upon a time. Perhaps that is why it won eight Tony Awards in 2012 including Best Musical.

What’s so electric about Once, besides some incredible songs, including the Academy Award winning Falling Slowly from the film, is that the actors double as the on-stage orchestra. No musicians in the pit in this musical. Granted, the music is made up of mostly stringed instruments: bass (stand up and electric), ukulele, mandolin, guitar, violin, banjo, cello. There is also piano and accordion, percussion and drums. The percussion is quite inventive as it often comes in the form of a wooden box. One of the characters props the box on its side, sits upon it and taps his fingers to create a multitude of different sounds and beats.

The national touring cast that stopped at the Broward Center has been on the road since 2013. (The tour is scheduled to end in December). It features a talented cast and its two leads, Stuart Ward as Guy and Dani de Waal as Girl, have a captivating chemistry. As a party on stage (more on that later) starts to break up, the lights begin to slowly fade. Then the melodic, power-packed opening number Leave settles in. Ward starts off slow with a lonesome growl – intimate and bold at the same time – then lets loose and the show is off and running. Before the national tour, Ward performed understudy to the lead role in London’s West End production of Once, and it shows. This guy knows Guy. From beginning to end, he captures the essence of the brooding singer, a man who feels he has nothing left. The portrayal is realistic and conveyed with a painful honesty.

Dani de Waal as Girl, who wows Guy with her mastery of Mendelssohn, gives her character an infusion of quiet reserve. She’s icy enough to convince that she’s Czech, but has a way of exuding a subtle warmth that can make you see why Guy would want her to run away with him. The two create an interesting contrast.

Other standouts are Evan Harrington as the burly teddy bear and music store owner, Billy; Tina Stafford as Girl’s bold, storytelling mother, Baruska, and Jon-Alex MacFarlane as the bank manager whose delivery of his original song, Abandoned in Bandon, is one of the comic highlights.

While Enda Walsh’s book, based on John Carney’s movie, sometimes seems to drag on a bit here and there, the music by Glen Hansard and Markéta Irglová is mesmerizing – a richly woven tapestry that finds at its roots in Irish folk, yet infuses it with rock ‘n’ roll and American pop.

John Tiffany’s direction is masterful, as he’s able to create different locations just by the addition of a table or a row of chairs. Bob Crowley’s scenic design of the neighborhood Irish bar positions an overly large mirror on the back wall. When the lights are up as the band plays in the opening minutes, the mirror reflects the audience watching. When the lights go down, the mirror plays with the characters, sometimes showing a different angle of Guy or Girl or both, leaving the visions open to interpretation.

Show up early to join in the fun on stage where the actor-musicians host an Irish hoedown and a cash bar is set up where you can buy a drink, then co-mingle with other audience members and the band. The same routine happens at intermission. It’s just another way Once draws you close.

Folksy, intimate, and warmly fulfilling, Once is as intoxicating as a shot of Irish whiskey. The buzz remains long after the hummable Falling Slowly reprise.