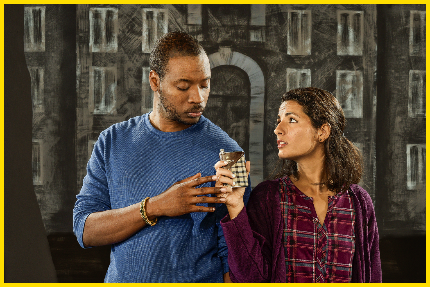 Every once in a while, a report from the inside tells the rest of us what life is like for teenagers on the cusp of adulthood at a particular moment in the development of society. It might be a classic like Catcher in the Rye, maybe a film like Easy Rider, perhaps a television show like Buffy the Vampire Slayer.

But they serve as both an education for most of us and an uncensored historical document for the future to document the zeitgeist, not so much of how things were but how they were perceived.

It can be argued whether Anna Ziegler’s Actually is a perfect piece of art, but it’s hard to argue that the dizzyingly thought-filled drama at GableStage has captured the angst and conflict about sex and relationships — familiar territory for us all about coming out of adolescence, but aggravated and mutated in a unique 21st Century way.

Although laced with humor, Actually is, at first, a discomfiting, and later, lacerating depiction of two deeply confused Princeton freshmen whose sexual hook-up leads to a rape allegation being investigated by an internal college panel.

For much of the 85 minutes, the alleged assault is lost inside an intense and dense — very dense — portrait of the inner workings of still evolving minds trying to navigate, negotiate and decipher a world driven by the intersection of sex and fragile feelings of self-worth. Plus race: Tom is a handsome sexually active African American piano student and Amber is a white Jewish woman with a lack of self-esteem to the extent that she feels “invisible.” Not everything being said is true or the whole truth in part because they are only discovering it themselves.

Sex is a crucible in which their different but shared inability to know other people is exposed. They are both just beginning to figure out who they are as they stumble out of different but baggage-filled adolescence and have yet to know how to relate to other people, especially in the fraught arena of sexual relations. But in 2018 amid the long-overdue #metoo movement, the stakes are higher, the thresholds for fallout are lower.

For at the heart of the plot are two people trying to discover what constitutes saying no, why should you have to actually say no, do you actually have to say no, how do you know it’s no if it’s not uttered, is it no if it’s simply the fear of sex, and about six other permutations of the issue. Like we said, it’s dizzyingly dense. As Amber, who acknowledges that she has often been silent during her scarce sexual encounters, asks who actually says the word “yes” before a sexual coupling? There will be arguments on the car trip home whether rape occurred.

A warning: Individual audience members’ life experiences and evolving attitudes often color how they receive a play. It’s fair to say that few plays will produce such differing take-homes as this one depending on your sexual identity, age, social strata, feelings about #metoo and a dozen other facets. Boomers and their parents whose experience is forged by both ‘60s sexual freedom and ‘70s feminism will struggle to find the protagonists’ groove – which is what gives it worth.

Obviously, this requires two astonishingly talented actors, which it has in Joshua Jean-Baptiste and Maria Corina Ramirez, guided by a veteran director, in this case Gail Garrisan. Together, they create vulnerable, deeply confused teenagers who are painfully aware that they are blindly trying to find their way in the uncharted world of adulthood.

Set simply with two conference room chairs in front of a painted backdrop of the Princeton campus, Actually is the two students who seem to be talking to the audience, although it’s really their inner thoughts pinballing through their heads.

We watch Tom and Amber’s herky-jerky evolving relationship, if that’s the right word, in which Tom is intrigued by this odd fish and Amber becomes entranced with the idea that this hunky guy might be interested in her. Both of them are interested in the prospect of having sex, although it’s less of a validating goal for Tom as it is for Amber.

They get drunk and they willingly go to bed together. But mid-coitus something happens that neither understands but leads to a spiraling disaster that they initially cannot quite explain to a bureaucratic student affairs panel. For most of the play, their deep personal confessions of difficult adolescences and the stark fear of being a college freshman on their own for the first time are delivered to the audience, not to the panel. It is, in fact, what they should be explaining to the panel because it puts the allegation in completely different lights (plural) than the unvarnished facts. Eventually, their confusion erupts in a destructive conflagration.

Ziegler is an award-winning playwright whom mainstream audiences don’t know. But her skill here is breath-taking naturalistic dialogue, observation of human behavior and incisive analysis of the current social climate. Her Amber goes off into side tangents too often and too long, although we know she is using a whitewater torrent of words to hide or deflect what us really bothering her. That will make some audience members silently tell Ziegler that they get it, move on.

Jean-Baptiste has the less showy role, but excels at creating someone with a confident charismatic exterior but a decidedly unsettled interior. Ramirez’s Amber is a stunning creation of jangly anxiety and an articulate volubility, which is really her way of avoiding straightforwardly facing anything troubling. The two create highly likable, quirky and awkward people with no desire to hurt each other. But unable to know how to read each other, they do.

Garrisan has masterfully molded the evening, which starts out, to mix a few metaphors, like the manically random careening of microscopic particles in Brownian motion, eventually circling into a blindingly fast cyclone and finally colliding in a fiery nuclear tragedy. Her sculpting of these brilliant performances and her pacing is invisible but worthy of a textbook.

A side note: Frequent theatergoers notice groups of theater artists who have gotten to know each other in school (often New World School of the Arts) or have hooked up early down here. They work locally for several years, some stay, some go to New York, some go to New York and return. But there’s a bond and chemistry. Jean-Baptiste and Ramirez have among other things apparently wrote and starred in a scripted a digital series called Grown that follows Haitian Americans living in Miami.