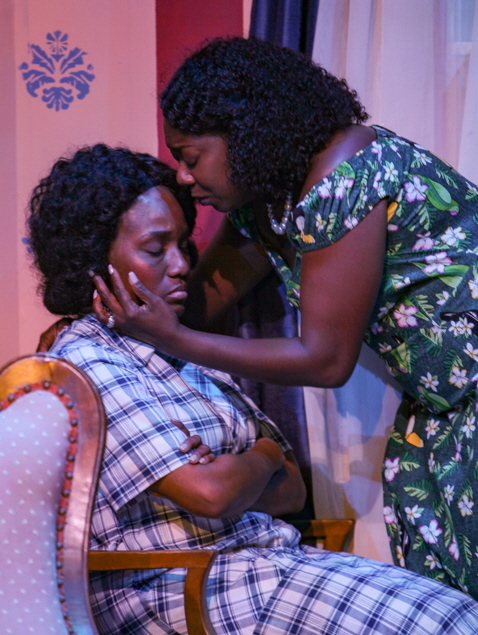 The Old Settler at M Ensemble starts off like a TV sitcom featuring witty banter between sisters living in 1943 Harlem. But slowly, characters start referencing race, sex, age, loneliness and family baggage until anger and tears produce a moving tale that qualifies as more than a soap opera and falls a bit short of August Wilson territory.

This story guaranteed to elicit cheers, audible protestations, handclapping and gospel sing-alongs (all this came from the audience Sunday afternoon) is the very definition of a crowd-pleaser, without a shred of condescension meant.

The premise is that 55-year-old wise and kind Elizabeth Borny (Brunson) has taken in her slightly younger sister Quilly McGrath (Alexander) whose marriage has fallen apart. To help pay the rent, they have found a good-looking if incredibly naïve temporary boarder Husband Witherspoon (Scott Wesley). He’s a young fella from small town South Carolina who is looking for his former girlfriend Lou Bessie (Rachel Finley). She left alone for the big city when Husband wouldn’t leave his ailing mother, now deceased.

Much of the early scenes is comprised of good natured teasing between Elizabeth, a warm-hearted soul blessed with wit and intelligence but a feeling that part of her life has passed her by, and Quilly, whose knife sharp smarts are clothed in a wicked sense of humor and a Jack Benny deadpan.

Back from a funeral, Quilly wonders if the widower will remarry soon. Elizabeth protests that they just buried the wife. Quilly quips, “Time passes, she ain’t gonna get any deader.”

The late Redwood had a precise ear for authentic phrases and sayings of the period that Alexander and Brunson do proud. Taken out of context, they don’t make sense, but among Redwood’s hilarious one-liners are “There’s no point you standing there looking like Uncle Ben before he started cooking rice,” or “I ain’t gonna to let you and the devil take me to the outhouse.”

Turns out Lou Bessie has quickly made herself part of the stylish fashionable set of the late Harlem Renaissance, dressing in fancy clothes, hanging out with shady types and adopting the name Charmaine. A built-in manipulator and user, the unfaithful Charmaine shows up at the apartment to entice Husband out of his inheritance by feigning interest in rejoining him. She even wants to change his name to the more sophisticated Andre. She is especially contemptuous of black women who have not assimilated with the urban milieu. She disparages Elizabeth as an “Old Settler” a derisive term for an unmarried spinster pushing 40. 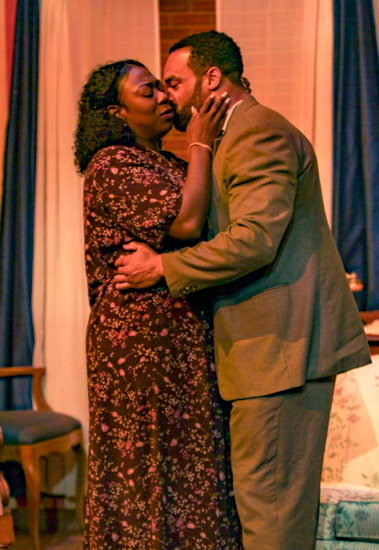 The entire story takes a turn when Husband falls in love with Elizabeth and proposes. She tries to resist, knowing full well their 30-year-age difference. But her loneliness gets the better of her. In a terrific scene closing the first act, Husband is embracing her and kissing her. She struggles, saying in panic, “This ain’t right.” And then she gives in to her feelings, now saying with released joy, “This ain’t right.” The crowd Sunday went wild.

Obviously, relationships get far more complicated. Crucial revelations center around the sisters: One finally getting a first chance at love when some people are on their second and third chance, and the other who has a deep-seated need for her sister’s companionship. Quilly warns Elizabeth that Husband is really looking for a replacement for his deceased mother. Elizabeth in response finally lets loose with a the fury of a deep emotional wound that Quilly inflicted on her decades earlier ago.

The play weaves in talk about how World War II is still raging overseas with black soldiers able to fight for a country that persecutes them at home, considerable lusty talk among the sisters about sex, how racial prejudice is just as dangerous up north as down south, how white employers look at domestics like Quilty and how they are viewed in return, and especially how black families with paid for tickets  were kicked off passenger trains when there wasn’t enough room for white passengers wanting to board later.

Redwood imbues the story with the flavor of the unique environment outside, using slang like “pimp steaks” for hot dogs and citing icons of the neighborhood of the time like the Savoy Ballroom, the Apollo and Jimmy’s Chicken Shac’

What is especially fascinating is Redwood’s use of all four characters as symbols of different waves of the black diaspora from the south to the north. While the sisters try to maintain the integrity and values they learned in church in the south, Lou Bessie cannot assimilate herself fast enough or completely enough – happily divesting anything of her old life.

M Ensemble regular Alexander embodies the sister who life has treated badly and has a cynical attitude in which she expects nothing good to come from anything. The sole blessing in her life is her sister who she still finds time to needle.

Brunson successfully traces Elizabeth’s transformation from someone who has finally come to terms with the certainty that life has passed her by and then who comes alive at the prospect of long delayed true love.

Credit is due to the costume design by M Ensemble co-founder Shirley Richardson: quiet plain print house dresses for the sister’s daily routine, Sunday-go-to-meeting outfits for church functions, stylish outfits for Lou Bessie and a hilarious outfit for Husband that we won’t spoil.

Something about this production doesn’t land solidly in the beginning. For one thing, no one on the opening Sunday had learned to time their dialogue to allow for the laughter, hooting and hollering from the audience. So the first part of the ensuing lines were lost.

The story can only end one way, but the journey there is marked by poignancy and compassion. The final scene with little dialogue is inarguably as touching as you can ask for.