Hundred Days: Grief As Part Of Life –With Music & A Few Laughs 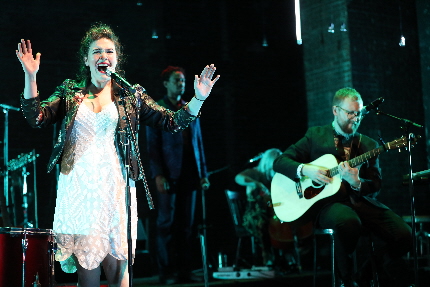 Abigail and Shaun Bengson sing, laugh and wail about coming to terms with tragedy as part of life.

One pleasure for regular theatergoers is when they get a pleasant surprise, and the Arsht Center’s Theater Up Close’s latest entry Hundred Days certainly qualifies.

You could be forgiven for wrong first impressions walking into the Carnival Studio Theater and seeing, instead of a drama’s set, essentially the stage for a rock concert with instruments, stand microphones, a percussion trap set on a riser and a few dozen bare bulbs overhead.

Then six musicians take their places, dressed like they just left a gig at an East Village neo-coffeehouse. A beaming lead singer comes forward to banter genially with audience, asking them to turn off their cellphones and eases patrons into their concert.

This is not what the audience expects as part of the Theater Up Close series in which the Arsht hosts Zoetic Stage’s traditional theater works and fills out the schedule with stylistically theatrical pieces by the House Theatre of Chicago.

But you’d be wrong. It may often feel like a concert, but Hundred Days is a moving, heartening theater piece with song and story hewing to a single narrative line and theme. The songs advance the plot or explore a character’s inner monologue. The script may seem simple, but it dives into issues and emotions. The inventive lighting, effective direction and choreographed movement is as precisely thought-out, evocative and polished as found in any traditional offering.

The premise is drawn from the lives of the show’s leads, musicians Shaun and Abigail Nessen Bengson, who fell quickly, deeply and insanely in love, getting married three weeks after they met – clearly the forever soulmate of each other’s lives.

In this fictional riff, their car runs into the back of a UPS truck on the way to their first joint gig, sending Shaun to the hospital. There, Abigail is told that he has one hundred days to live.

But Abigail has wrestled her entire life with cauterizing after-affects of a family-wide tragedy of death and madness that occurred when she was 15. Her response for years was to run away. Now she must ask: How do you make the most of the time you have?

Initially, the couple responds by savoring every glorious detail of life – somehow actually slowing the rush of time so that a day can be as pungent with experiences as a year. But as the deadline approaches, Abigail must decide whether to flee or come up with a completely different way of looking at life.

Of course, with Shaun’s help, she does. It’s no spoiler to reveal that it involves an existential embrace of death, tragedy and grief as a part of life’s equation, balanced by a commitment to never let its ever-present specter rob them of life’s joys. On paper, this sounds New Age silly, but in the earnest music and words of the Bengsons, it is uplifting in a world of uncertainty and mortality.

And both are natural if not trained actors, especially evident when Abigail, agonizing whether to desert Shaun, undergoes a musical Gethsemane with wails originating in the gut a la Janis Joplin.

Essential to the show are bandmates Ashley Baier on percussion, El Beh on the essential mood-setting cello, Barrie Lobo McLain on a passion-infusing accordion and Lindsey Augusta Mercer on keyboards. All of them provide glorious backup vocals that give the show heft, but they also get their own solos.

All the theatrical elements are so subtly woven that civilians won’t notice the skill. The seemingly off-the-cuff narration by Abigail is carefully penned by Sarah Gancher who regularly offsets the drama with wry humor. Veteran director Anne Kauffman invisibly stages the piece that looks like a concert, but places performers deliberately. The performers jump, twist and move in choreography by Sonya Tayeh that deceptively looks natural. Nicholas Pope’s sound design is flawless so that you aren’t aware of background environmental sounds until a character mentions it. Special praise goes to Andrew Hungerford’s lighting, as complex and mood-altering as for any traditional drama.

For instance, images of salt and snow figure prominently in Abigail’s portentous dreams. One or more of these artists are responsible for a special moment when a half-dozen narrow beams of light fall from the ceiling along with a stream of powder that could be salt, snow or the sands in an hourglass.

The show, which has a decidedly fringe-y feel to it, premiered in 2014 and has been through a few iterations since, including a run at the New York Musical Theatre Workshop. What that has wrought is a quiet, gentle hand on the shoulder of anyone trying to come to terms with living fully in the shadow of mortality.

Hundred Days runs through April 21 at the Carnival Studio Theater at the Adrienne Arsht Center for the Performing Arts, 1300 Biscayne Blvd., Miami, a co-production of the Arsht’s Theater Close Up series. Performances are 7:30 p.m. Tuesday-Sunday; 3 p.m. Sunday. Runs 75 minutes. Tickets are $55.  For more information, call (305) 949-6722 or visit arshtcenter.org.