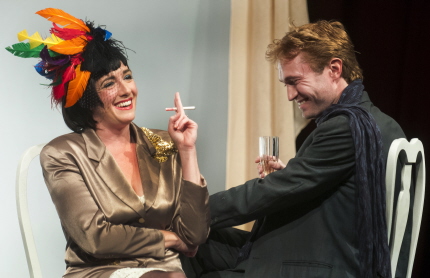 For some unbridled personalities, style is life. But for a style addict like 1980s-90s fashion icon Isabella Blow, it never provided enough substance to fill the hole in her soul. Watching Blow wrestle with her past on the eve of her seventh and finally successful suicide attempt provides a cautionary tale in Mad Cat Theatre Company’s insightful, witty and thought-provoking world premiere of Jessica Farr’s Blow Me.

Farr and director Paul Tei’s fever dream depicts a tragic death spiral, relieved by copious droll dancing-at-your-funeral epigrams tossed off by Blow and her coterie like a latter day Algonquin Round Table.

The play swirls around a bravura performance by the superb Erin Joy Schmidt. She creates a memorable portrait of a flamboyant 24/7 persona that was artificially constructed for a world of people seeking celebrity as self-validation.

Blow Me, beginning with the title, is a classic Mad Cat entry with an adventurously surreal style and a pugnaciously nose-thumbing attitude toward traditional theatrical conventions.  It’s a perfect match for Blow herself, a British fashion magazine editor famed for mentoring designer Alexander McQueen, milliner Philip Treacy and models Stella Tennant and Sophie Dahl.

For this cross between Auntie Mame and Tallulah Bankhead, panache is everything, from her devotion to Treacy’s outrageous hats to a cigarette defiantly hanging between two fingers. After she breaks both ankles in a suicide attempt, a friend suggests she shouldn’t wear high heels. To which Blow responds, “Don’t be silly. I wouldn’t exist if I couldn’t wear them.”

Asked if a drink is too strong, she coos, “Oh, sweetie, I’d drink paint thinner if it wasn’t so testy on the stomach.”

The arc of the evening finds Blow in her final moments watching snippets of her life flash by like disconnected shards in a kaleidoscope. Her deceased parents, designers, models, lovers, multiple husbands and tabloid reporters float through her reverie.

Farr understands that her heroine has flaws. When Blow complains about losing a job and “facing poverty,” Treacy castigates her: “Despite how many Cinderella lies you’ve told yourself over the years, not everyone is like you, born with a silver spoon only to spit it out when convenient.” In fact, Blow’s sadness seems a bit self-indulgent, like someone bored with the excesses of life when some people are starving to death. As a result, it’s nearly impossible to feel sorry for her angst and depression .

The evening is not perfect. Farr intentionally spins the evening through space and time with no concern for chronology. Therefore, audiences unfamiliar with Blow’s life may get a bit confused where they are. Five minutes with Blow’s Wikipedia entry is advisable.

For the same reason, confused audiences also will feel the script is a bit overlong. Some scenes are wryly funny, but really don’t add to our understanding of Blow. Worse, Farr doesn’t make clear the roots of Blow’s fatal melancholy other than a rotten relationship with her parents and the professional betrayal of some of her friends.

But there’s no doubting the evolving talent of Farr, the native Miamian who joined Tei last year for the far less disciplined fantasia The Hamlet Dog and Pony Show. Blow Me is an expansion of Farr’s one-act Charming Acts of Misery, which debuted in April at the South Beach Comedy Festival. Her characters speak with that self-aware stylized language that we like to think in retrospect that we actually uttered. She also has a facility with long speeches in which luxurious language wafts gloriously like the smoke from that cigarette.

For instance, at the end of Blow’s trip through the rabbit hole, Farr has her say, “I’ve always wondered if the end of my life would be like some kind of Fellini movie. Everyone would come together and try to save me, one last time. Save me from myself perhaps, or just the pain of the transition. They’d sing and smile like angelic little clowns. Lights would burn softly in the distance. Just like 8 1/2, all of the misery would fade away into one charming whirligig of a moment, singular, and yet full of complex multiplicity, moments like a string of pearls. The fashion show ends, the models cry, the men carry me on their shoulders to the banks of a river to be reborn into the unknown. Life fades away into a traveling parade, never-ending into swooning darkness. What am I without the spectacle? Nothing. Who really lives without it?”

Tei, whose talent for making sense out of surrealism was evident in Naked Stage’s 4:48 Psychosis, is perfectly in sync. His characters walk up and down the white thrust stage as if it was a runway; characters speak over the audiences’ head from the dark corners of the tiny black box stage.

Schmidt, acclaimed for her naturalistic style and quirky voice, has completely obliterated any trace of her earlier portrayals other than a guarded, badly bruised vulnerability. Her outsized Isabella Blow is a startlingly different persona, proving once again Schmidt’s wide range.

Supporting her is a clutch of chameleons playing a half-dozen roles each: Noah Levine as the supportive Treacy, Matthew Glass as the working class McQueen and her dead father, Greg Weiner as her husband Detmar, and Emilie Papp as her disapproving mother. Most of the time, the entire cast inject a truthfulness into even the most bizarre circumstances, except when Papp portrays a tabloid reporter whose speeches never land convincingly.

Costume designer Karelle Levy gleefully lets her imagination run wild within the confines of a limited budget. Our heroine’s garb is intentional anarchy from her offbeat footwear to the ratty fur coat to her de rigueur hat — a veiled cap topped with a flock of feathers whose colors are drawn directly from a box of Crayolas.

Her work is emblematic of the entire effort in which everyone, Schmidt especially, throws themselves unreservedly and courageously into a difficult tale about a troubled human being.

Sidenote: Mad Cat has moved from the Miami Light Project space to the small black box Sandbox space at the Miami Theatre Center, formerly known as The Playground Theatre in Miami Shores. Space is limited and there is no assigned seating.

Postscript: I’m actually writing this section first because I’m so mad at the breathtaking thoughtlessness and self-centeredness of two jerks in the audience. I’m talking about the woman with curly red hair to her shoulders, wearing a lime and charteuse flowing dress, on the left end of the front row in the center section. She spent about a third of the second act photographing the show with her phone – from the front row –but trying to hide what she was doing.  Yes, I’m talking about you with the green cell phone cover. Then, suddenly, another woman standing in the corner fired off her phone with a flash! Only my wife’s calming influence kept me from going to them after the show and questioning the legitimacy of their parentage. Seriously, seriously, which part of the “don’t shoot pictures” admonition, let alone the part about “turn off your cellphones” did these insensitive cattle not understand. Next time, go to Hangover 3 rather than theater.