National Tour of Cinderella Has Unintentional Bite This Season 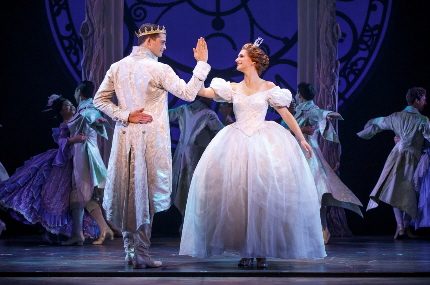 We were planning just to freshen up the review from when the national tour of Rodgers + Hammerstein’s Cinderella played the Arsht and the Kravis two years ago, and note that this was a new non-Equity cast visiting the Broward Center through Christmas Day.

But Donald Trump got in the way.

Early on, the fledgling young prince meets our titular heroine as he passes through the forest. After he leaves, she is told of his identity. She says incredulously, “That was a world leader? He appears to have a heart, a mind and a soul!”

The audience at the Broward Center opening night laughed heartily.

It was the first of perhaps a half-dozen jokes written in the venerable musical’s overhauled script by Douglas Carter Beane that were witty but had a much different bite than when they were first heard on Broadway in the Obama years of 2013.

Indeed, as we mentioned in 2014 and will explain at length later, this is not the Cinderella you remember from the television screen of your youth. The story is heavy on the Disney-brand theme of empowering young women (although Disney is not involved) but also a strong narrative about how the heroine awakens a clueless heir to the throne about the social injustice and financial inequity in his kingdom propagated by a self-serving bureaucrat. The show depicts, in fairy tale and comic book terms, a populist revolution. Really.

Over and over, this somewhat mechanically inserted theme resonates more loudly than even the musical’s creators meant, taken in the current context.  And what’s fascinating is that while this was created presumably by a primarily liberal-leaning team, it could be embraced today by conservative partisans as well.

So Broadway Across America unintentionally is offering a classic example of how art and even pure entertainment can be viewed differently over time even by the same audience as the world around it changes.

Back to the review: It’s undeniable that Rodgers + Hammerstein’s Cinderella is a lush, imaginative and polished production nearly guaranteed to delight audiences of all ages – really, toddlers in rarely-used Disney princess costumes to grandparents bemoaning the evaporation of “good ol’ theater.”

But this edition is awash in spectacle, soaring voices, stage magic and theatrical craft in every discipline and most prominently, Beane’s very contemporary script festooned with enough arch jokes and current cultural references to keep the parents in the audience entertained. Beane, to be fair, is a terrific playwright with a wonderfully wry sense of drollery, seen in plays like The Little Dog Laughed.

While the show shuttles between witty satire and unabashed romanticism, Beane and director Brokaw do a passable of job of preventing you from feeling like you are watching dueling shows. That’s because when they go for the romance, there’s no winking, no holding back. The elegant scene at the prince’s ball when Cinderella and Prince Topher (Prince Topher? Maybe better, Prince Keanu), meet is, indeed, sumptuous in sets, costumes, lights, music, choreography and the emotion emanating from the characters.

Josh Rhodes’ original choreography (reworked for the tour by Lee Wilkins) is energetic and peppy enough in most places, but it becomes a dream in the swirling ball scenes. Kenneth Posner has evocatively lit Anna Louizos’ highly textured settings including a deep forest that could be used for the next production of Into The Woods.

Brokaw, who obviously deserves credit for much of the vision, staged the entire evening with imagination, and his work has been restaged on the tour by Gina Rattan.

Tatyana Lubov’s Cindy has a lovely mezzo-soprano but in keeping with this populist vision, she is attractive but not fairy tale beautiful.  Instead, she exudes a regular human being vibe that is utterly relatable. Hayden Stanes, who looks like some media star we can’t quite name, is requisitely tall and handsome with a flexible tenor, and a willingness to make Topher a bit callow with the need for some independent woman to help him grow up.

Sarah Primmer is an unapologetic haughty and abusive stepmother, Leslie Jackson is a clarion-voiced fairy godmother, Mimi Robinson is the kinder of the stepsisters and Joanna Johnson is the nastier of the duo who gets the show-stealing “Stepsister’s Lament” whose title you may remember in previous productions had the possessive apostrophe one space to the right because it used to be a duet but is now a solo and chorus number. 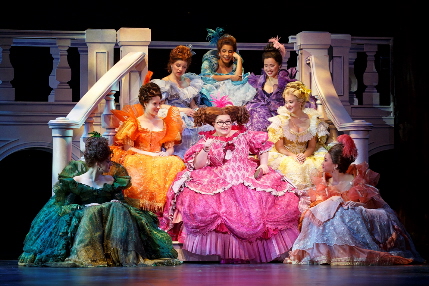