Posted on September 2, 2012 by Bill Hirschman 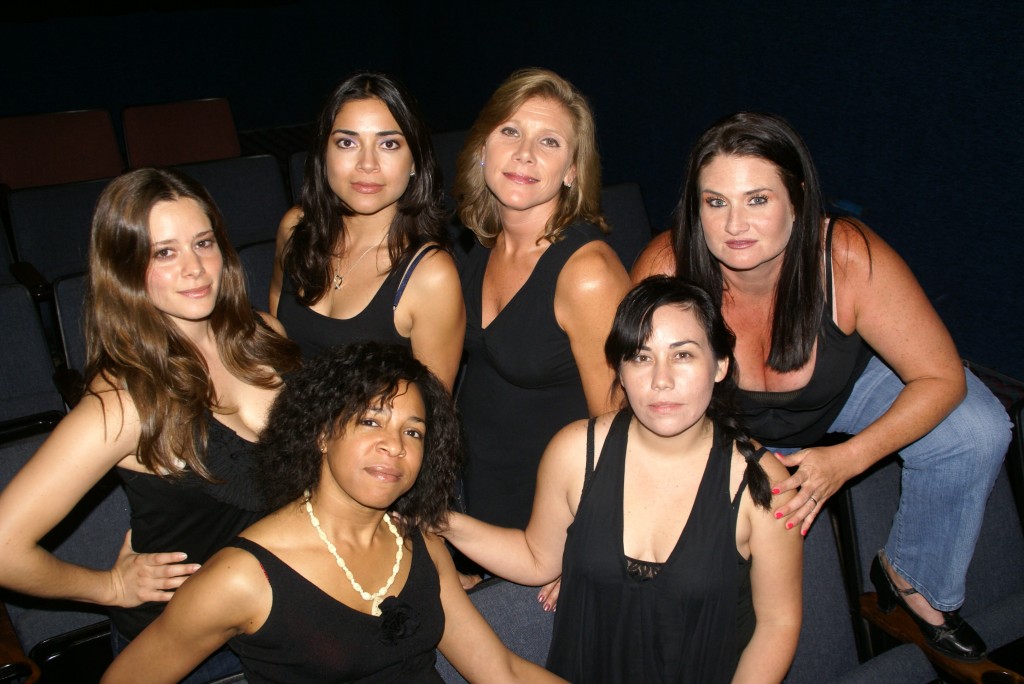 The success of theater often depends on the audience plugging in their own experiences to enhance what’s happening on stage.  So perhaps part of this reviewer’s hot-and-cold reception of Keeping A-Breast – an earnest, heartfelt examination of the agonizing upheaval resulting from breast cancer – is because I’m a man.

This collection of 12 monologues, playlets and segues at New Theatre is shot through with moments that will produce empathy in anyone regardless of their sex as six actresses portray the terror of death and the victory of self-esteem over societal stereotypes. But a lot of the work seemed overwrought and even borderline pretentious, even within the same skit.

New Theatre commissioned these pieces from playwrights whom the theater has dealt with before. It’s the first entry in its BOOMFROG series to attract younger audiences with edgier, bare bones, less traditional fare. But the quality of writing, directing and acting in this inaugural offering is wildly uneven as if the 70-minute evening was a tossed-together summer camp Skit Night.

Most of the pieces deal directly with the scourging emotional gauntlet of dealing with breast cancer and the social fallout from reconstructive surgery. But the recent play collection Standing On Ceremony asked playwrights to address different facets of a single topic, in that case, gay marriage. It felt as if you were watching a kaleidoscope of ideas. In Keeping A-Breast, it seemed as if everyone was simply giving their riff on the identical facet: learning how to love yourself and your body regardless of your body image.

What saves the evening from its righteous polemic tone is the elation and energy of the actresses directed by New Theatre Artistic Director Ricky J. Martinez and Literary Manager Steven A. Chambers, although some of the performances seemed one-note and not terribly nuanced. The playwrights and actresses toss around the entire spectrum of nicknames for breasts with a joyful abandon that would get most men in trouble for objectifying a woman’s body.

The most successful section was The Antiques Road Show, a monologue by Catherine Bush (whose Just a Kiss played at New Theatre in 2006). Carey Brianna Hart was quite funny as the woman who discovers her husband has been watching porn on their big-screen television because her small breasts don’t satisfy him. Hart’s character, absent a shred of the self-pity that suffused the rest of the show, has to decide whether to have breast augmentation or toss the bum out. Although she climbs up on the surgery table, her ultimate decision is virtually pre-ordained. It’s Hart’s droll delivery of Bush’s words with a delightful topspin that has the audience silently cheering “You go, girl!”

Another intriguing piece was the monologue A Thing of Beauty by Ruth Pleva and Elly Rakowitz. This one featured Francine Birns who starts out rapturously extolling the beauty of her body and sharing with us in detail how much she venerates her breasts. But when she loses them to cancer, her demeanor changes and she tells with chagrin how she rejected her husband and even her child. But she slowly comes to appreciate the new her as just as worthy a human being — a Lifetime movie condensed to about seven minutes. Birns threw herself bravely and unreservedly into the material, but like almost everyone else in the cast, she intoned the monologue as if reciting a Script Of Social Importance rather than just talking to us.

Another thematically stimulating monologue was Vanessa Garcia’s Fruit in which a mother (Jessica Marion Welch) tries to help her 12-year-old daughter cope with the onset of puberty. The girl has been taping down her breasts in what may be an unconscious attempt to stave off maturity. But the mother finds an ingenious way of sharing her own embrace of her womanhood as symbolized by breasts.

Melissa Amalguer delivered Garcia’s monologue Reconstruction. While not totally satisfying, it also had a thought-provoking central character: a woman who valued the naturalness of her body and looked down upon the South Beach women who indulged in cosmetic surgery. But now she has to come to terms with reconstructive surgery in the wake of a mastectomy. Garcia has written several deft lines such as describing cancer as “a vicious civil war in which parts of myself are trying to kill me.”

Some of the writing was lovely and flawed in the same piece. David Caudle, the former Miamian who wrote three plays for New Theatre, penned Motorboat. In this monologue, Desiree Mora retold a traumatic incident to someone. Caudle never tells us until the end what the heck is going on, such as who is she talking to. That may be intentional but it left the audience so much at sea that they were more focused on getting their bearings than on what is being said. Yet he does portray the different insight of a woman who rejected reconstructive surgery because, she says, “I want my body to tell the truth.” But her decision has blowback when she doesn’t want to wear an uncomfortable bikini top on a boat. The woman’s incredulity at a man’s outrage over her innocent but thick-headed gesture to let a 9-year-old boy on board touch her chest is ludicrous. Worse, the directors have allowed Mora to start the scene wracked with sobs and allow her to sink even deeper into a wallow of sorrow for the next ten minutes. She starts out the scene where she should have ended.

Some of the pieces like Peggy C. Hall’s Up In Arms – A Sestina Monologue sounded like coffeehouse performance art poetry – often finding lovely phraseology and metaphors, but also skittering along the edge of I Am Woman Hear Me Roar pretentiousness. (Wikipedia says a sestina “is a structured 39–line poem consisting of six stanzas of six lines each, followed by a three-line stanza, known either as an envoi or tornado” for all you non-English lit majors.)

Two humorous pieces simply didn’t work.  A Tale of Two Breasts, by Pleva and Rakowitz, was a lame Saturday Night Live skit in which Christina Perdomo-Fernandez and Desiree Mora each donned one large plastic naked breast, stood side by side in a mammogram-like rectangle and discussed how they didn’t want to be separated in an upcoming mastectomy. But the skit went nowhere and the laughs petered out.

Even worse was First Date by James Carrey, a bizarre, intentionally broad vaudeville sketch in which a fluttery ingénue out of a melodrama ( Melissa Almaguer) is dating a mustachioed doctor (Welch) who she believes is an OB-GYN, therefore allowing him to clutch her breasts under the excuse of an exam – during the date. It’s main virtue was that it ended quickly.

Other pieces in the evening were by R. Kent Wilson, and by Martinez who created prose chorale pieces for the curtain raiser, entr’acte and finale. The actresses stepped in and out of the group speaking lines solo or in duets or en masse. The idea had a ritual theatricality that worked a lot better in the recent Love, Loss and What I Wore. But that didn’t have lines addressed to breasts like, “I love you because you are me and we are love.”

These kinds of socio-political evenings are tough to pull off, although The Vagina Monologues and The Exonerated show it can be done. This one isn’t bad, but it is too uneven to be satisfying.