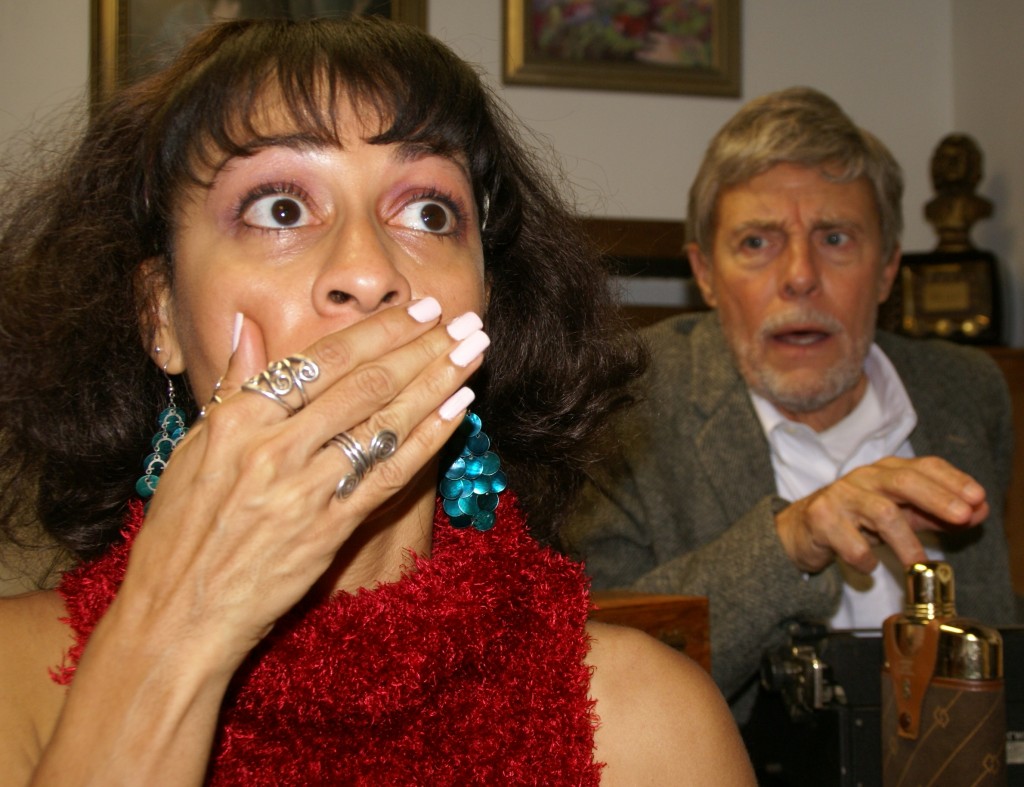 It’s not an encouraging sign when all through New Theatre’s production of Educating Rita  you keep thinking what a great script Willy Russell wrote rather than getting lost in the experience.

Even with two actors and a director who are striving, this edition sloughs listlessly in the opening 45 minutes or so and really only begins to be mildly engaging near the end of the first act. From there, the quality picks up somewhat, but not enough to redeem the show.

The tragedy is that Russell’s 1980 two-character play – better known for the 1983 film – is an incisive, funny and affecting work affirming the possibility of personal resurrection and redemption despite the artificial barriers of class, income and upbringing.

But all of that is fatally muted in the performances of Dawn A.A. Plummer and Peter Haig under Steven A. Chambers’ direction.

Russell, the bard of working class Britain who also wrote Blood Brothers and Shirley Valentine, creates a double Pygmalion tale. Susan, a Liverpudlian hairdresser weary of her dead end life, is ferociously bent on self-improvement. She enrolls in a university extension course in poetry taught by Frank, a burned-out professor who abandoned his dream of writing fine poetry. Susan has a long ways to go: She has taken on the first name Rita in honor of her favorite author, a contemporary author never to be confused with Jane Austen. Frank has even further to go: He has taken on the extra classes solely to pay for the nightly drunken binges that anesthetize him against an empty life.

Over many months, we watch Frank’s development of Rita’s analytical skills and native intelligence as it gives her the self-confidence she sought. Almost imperceptibly, her fire in the belly for something finer stokes the embers in Frank’s hope of kickstarting his own resurrection.

Among the script’s strengths are Rita’s wistful but powerful speeches about her commitment to find something better in life, even when it costs every aspect of the life she has known for 26 years. It also underscores the compassionate idea (to be repeated later this season in GableStage’s Good People) that people in the underclass are there initially as much by chance as choice. Rita’s mother says to her daughter in a drunken sob after a group sing at a pub, “There must be better songs to sing than this.” At the same time, echoing Eliza in Shaw’s Pygmalion (and My Fair Lady), Rita bemoans that she no longer fits in either her old world or Frank’s.  It’s these moments in the New Theatre production when Plummer breaks through to producing some empathy in the audience.

Haig is a mystery. It would be hard to imagine better casting. He has proven his skill and insight in a score of performances from his fresh take on the beloved dying teacher in Tuesdays With Morrie to his ethically-challenged patriarch in The Voysey Inheritance to the unlikeable curmudgeon in The Gin Game. We point these out because Haig seemed to be just walking through the first half of the show Sunday afternoon and only got incrementally better in the second half. Frank is, indeed, supposed to be a disillusioned husk who has given up on life, but the challenge in the part is to communicate that under the exterior lays a person of wit and worth who needs reclamation. But Haig mostly shrugs and grins grimly and stands without much animation. There isn’t even the hint of a British accent.

Plummer is more lively and endearing, although even she took a while to find her feet. But she came across as cartoonish rather than real until the last two scenes; we were always aware of her acting the role rather than being Rita.

What Plummer and Chambers do pull off believably is Rita’s gradual evolution, so that when Susan enters the office for the last time, we believe she is both a different person and yet the same person we met two and a half hours ago. She also deserves credit for a reasonably convincing accent. Granted, it sounds more rough-hewn Yorkshire than Liverpudlian at the start and settles into a coarse Cockney, but as the script dictates, it credibly mutates into a voice with less rough edges to mirror her growing sophistication.

By the way, note to all directors: If you have to put your actor in a wig, get one that doesn’t look like one. An unavoidable plot point is that Frank has shaggy, unkempt hair – something Haig does not. New Theatre got Haig a coiffed but clearly fake mop that makes him look like he was dressing up for Halloween as Virgin Airlines’ Richard Branson.

Sadly, this opener to New Theatre’s mainstage season has to be graded an underachiever despite having a first-rate textbook. We’ll look forward to next month’s rolling world premiere of Happy by Robert Caisley.