Next To Normal At Riverside Is Far More Than Just Normal 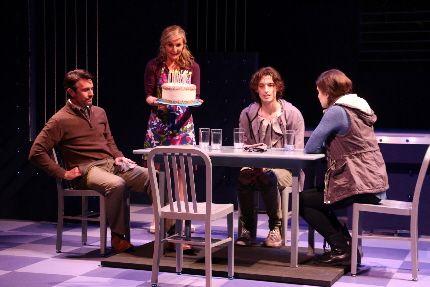 A key celebration among Eric Kunze, Judy McLane, Clay Singer and Isabella Stansbury in Next To Normal at Riverside Theatre

One of contemporary theater’s most powerful rock operas, Next to Normal, concerns a family dealing with the mother’s bipolar disorder. And you have the opportunity to see this Tony Award and Pulitzer Prize-winning phenom in a strong production on Riverside Theatre’s intimate Waxlax Stage.

When the show begins, everything seems in order in a loving family. It’s early morning, when the whole day, like their future, lies before them. Mother chastises her son for getting in late the night before. Father and mother hint at an affectionate interlude. Daughter buzzes in, stressed over school. The mother is the domestic goddess holding it all together, singing “We’re the perfect loving family so adoring.”

The only thing missing is a white picket fence.

But this home’s order is furiously sought and desperately obeyed. One step outside the lines might lead to chaos. Hinting at impending emotional anarchy is her manic attack on a loaf of bread.

Mental illness is certainly an unusual subject matter for a musical.  But the groundbreaking work of lyricist/librettist Brian Yorkey and composer Tom Kitt tackles this subject and delivers a powerful theatrical experience. It brings us viscerally into the lives of this family. We see how the mother’s disorder affects them while at the same time witnessing abiding love and eventual acceptance.

There is Dan, the father, who deeply loves his family and is thoroughly dedicated to them. Hoping his wife, Diana, will improve, he rides the emotional roller coaster, up to those highs of delusion-inducing positivity singing “It’s Gonna to be Good!” He then plummets to the lows of sadness and loss that is his reality.

Natalie, the daughter, has been ignored most of her life because the mother pays more attention to her son, Gabe, who both torments and comforts the mother. Deepening feelings for her boyfriend, Henry, awaken Natalie’s worries about her own sanity.

Unlike Dan, though, Natalie is more realistic about what to expect from the mother. She has lived this reality her entire life while the father knew the mother before anyone knew about the lurking mental illness.

Like Dan, Diana rides the highs and lows, but hers is due to a manic-depressive disorder. It is through her that we get a glimpse into the suffering experienced by someone with this affliction.

Taking an array of pills to control her condition, Diana sings “I Miss the Mountains,” in which she laments “Everything is balanced here…nothing’s real.”

This is all the stuff of excellent melodrama that, if set among royalty or higher class, would be considered taut tragedy. You just can’t get away from this show without getting caught up in the music, the story and the characters.

Directed and designed by Allen D. Cornell, the show maintains an order which belies the theme of chaos in which characters sing “catch me, I’m falling.”

The wonderful six-piece orchestra conducted by Ken Clifton sits onstage, up behind a black screen making them barely visible. They weave recurring musical motifs throughout, heightening the action and emotion. The music is deeply affecting and resonates for days.

The action takes place on stages below with set pieces efficiently pushed on and off, taking us quickly into a multitude of locations, including the kitchen, the basement, a hospital room, a school and more.

Keeping step with the driving sound and constant movement folding from one scene to the next is the terrific cast, three of them (the father, the mother and the doctor) with Broadway credits.

As Diana, Judy McLane has a flawless voice which hits every song’s power and urgency.

Clay Singer finds a sweet adolescent spot to Henry, the boyfriend. Patrick Mobley gives beautiful voice and teenage swagger to “I’m Alive.” And P.J. Griffith turns in a strong performance as the two doctors, one rather reserved and the other rather rock-star sexy.

Eric Kunze and Isabella Stansbury turn in winning portrayals of Dan, the father, and Natalie, the daughter. They not only sing beautifully, but they also dig into the souls of their characters and serve up the big emotion often missing from the show’s first act.

Those familiar with the show may find it a little too clean in the first act. Devotees might relate when Diana sings “I miss the dizzy heights/All the manic, magic days/And the dark, depressing nights.” And they’ll want more juice when Gabe sings “I’m Alive.” But the second act finds the emotional core and you will be rocked.

The duet with Stansbury and McLane, “Maybe (Next to Normal),” in which the daughter and mother relate honestly, will wreck you. This is where the show delivers the expected gut punch. But then there’s “So Anyway” with Dan and Diana, so be sure to save some of your tissues for that.

Don’t let these passions keep you away from Next to Normal. Indeed, if you have the emotional stamina, you will be rewarded with a most moving and memorable theater experience. Just be sure to bring the tissues. And don’t be embarrassed about wiping the tears away. Everyone will be doing the same thing.