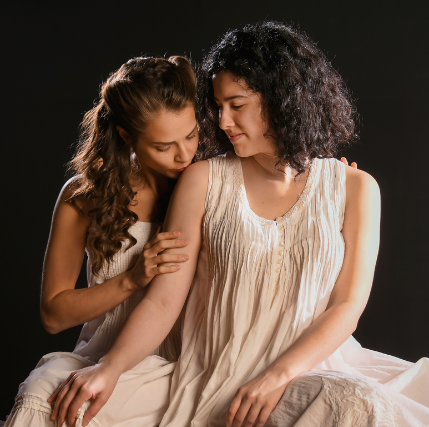 Savoring different spins and riffs on classics like Hamlet is one of the joys of theater, but it’s not attempted as frequently with contemporary works, let alone a recent Broadway hit like Indecent in which the original staging was widely acclaimed as integral to its effectiveness.

But Indecent was one of most produced works in regional theaters last year and playwright Paula Vogel has welcomed how different companies have used her 2015 script as a jumping off point for their unique vision.

GableStage’s rendering is, indeed, freshly distinctive from Rebecca Taichman’s New York staging and from the rapturously received version that Palm Beach Dramaworks delivered last season. It’s not better or worse; it is its own. And its quality takes a back seat to no one.

Director Joseph Adler has embraced the humor in the script a bit more, he has amped up the passion with a bit of extra muscle and the issues aspect of the piece emerges in higher relief than in some other productions. The overall effect may feel a tad less of a poignant tragedy than some other editions and more of an admonitionary tale. But working with co-director and choreographer Julie Kleiner, the result is a stirring experience. Where Adler’s vision dovetails precisely with Vogel’s is that Indecent is inescapably a paean to the glorious power of theater as an ennobling art form.

The GableStage version also easily melds the play’s outrage at censorship, its respect for homosexual love as valid true love and its depiction of the challenges of assimilation when language is a barrier.

Indecent is a play within a play “inspired by” actual events and participants. When the lights rise on an abandoned stage with scattered chairs and the inert bodies of actors splayed like forgotten puppets. Then words initially projected on the back wall before the show, “The true story of a little Jewish play,” give way to the phrase “Called to life.” A roar of wind in a tunnel grows, mixed with the rattle of train. These ghosts of a Jewish repertory troupe based in Poland after the turn of the century slowly arise from the dead to perform Vogel’s play Indecent.

It starts around 1907 when a young impassioned Polish novelist Sholem Asch writes a play in Yiddish, The God of Vengeance. While a bit melodramatic, its premise is boundary-shattering in its unvarnished vision of Jews as human beings with virtues and flaws, and its loveliest lyrical aspect is the growing love affair between two women.

In Venegance, an Orthodox Jew named Yekel runs a brothel in the basement of his home. Yekel believes that if he can find a righteous husband for his innocent daughter, Rifkele, and have a Torah scroll created as a gift to the couple, he can earn respect and make amends with God. He is unaware that Rifkele has fallen in love with Manke, one of his prostitutes. Vengeance’s two most controversial vignettes: the enraged Yekel hurling a Torah across the stage at his daughter, and a tender love scene in the rain between Rifkele and Manke.

Lemml, the company’s stage manager disillusioned by Asch’s refusal to aggressively fight, returns to the Warsaw ghetto. From 1939 to 1943, he defies the Nazi prohibition of Jewish theater by mounting secret productions of this work he has worshipped since the first day Asch showed it. Those forbidden productions held in attics in the ghetto have a tragic consequence.

The Polish actors watch the “real-life” scenes and “Vengeance” scenes from the visible wings where costumes and props await. Merged inextricably into the fabric of the fluid staging are joyful dances, exuberant singing of Yiddish folk songs and a three-person band who also play silent parts: Nancy 3. Hoffman on accordion, Glen Rovinelli on clarinet as he did for Dramaworks, and musical director Lisa Gutkin, who played in the Broadway production on violin. Kleiner, one of the region’s finest musical theater performers, guides the cast and band through folk dances as well as stylistic dreamlike movement such as the peripatetic actors spinning through space swirling with their suitcases around them.

Florida veteran Avi Hoffman plays Lemml, who discovers theater via the play and champions the work with a fervent infectious passion. Hoffman’s innate charisma and enthusiasm make this Lemml a more vibrant engaging narrator linchpin than the one on Broadway. His awakened fervor erupts when Asch will not defend his troupe in court: “Who does not stand up for his name on the title page.”

Alex Alvarez (Daniel’s Husband) makes a convincing evolution from the firebrand Asch to the disillusioned man who loses his commitment in the face of a hostile world. Hannah Benitez (Bad Jews and Fun Home) plays his supportive wife as well as multiple actresses hired over the years to portray one of the lovers. David Kwiat plays all of the elder statesmen parts, with Peter Librach and Irene Adjan easily slipping into a half-dozen roles. Out of towner Kelly Pekar is the other lovely and spirited lover exuding passion and verve.

All deserve credit with Adler for deciphering the complex multi-dimensional script by Vogel which resuletd in her first Broadway production in 2017 despite an acclaimed career as a teacher and the author of now classic plays like How I Learned to Drive and The Baltimore Waltz.

Initially, this was to be a joint production with Dramaworks mounted in both spaces at different times, something rarely done in South Florida. But an Actors Equity concern about pay cuts when the show would move to the smaller house forced the companies to create their own productions. In an example of the kind of cooperation some local companies have, Dramaworks provided Brian O’Keefe’s costumes which were then further altered and coordinated by Gema Valdes.

The play requires the audience to pay close attention because even with the changing time and place indicated by projections in the back wall, the Polish actors playing so many roles can get confusing.

But the reward is a haunting, thought-provoking evening.