No Doubt At All: Playhouse’s Doubt Will Make You Think 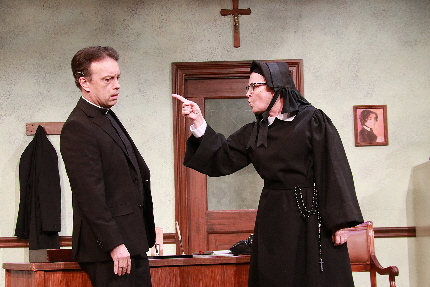 As with all the best productions of John Patrick Shanley’s Doubt: A Parable, the audience at Actors’ Playhouse goes out into the night arguing whether the priest at the center of the story sexually molested a young black altar boy.

And as with all the best productions, we will say it again as we do in every review of this play: It does not matter. The play is not about guilt or innocence. It’s about doubt. The nature of doubt. The fallout of doubt. Living with doubt. Deciding whether to act when you have doubt. How do we cope with the ultimate unknowability of all things, both temporal and divine.

In these extreme days when some people believe truth is fungible or fear that it is can never be divined, Shanley’s 2004 play is excruciatingly resonant.

Actors’ Playhouse’s production helmed by David Arisco starts off a little more lackluster than other productions. But about halfway in, it becomes compelling and trenchant high drama, nearly impossible to turn away from.

Doubt tracks an investigation by Sister Aloysius (Laura Turnbull), the martinet principal of a parochial school in the Bronx in 1964 when ecclesiastical reforms were clashing with hidebound traditions. She’s suspicious from the outset of the likable and handsome new parish priest Father Flynn (Terry Hardcastle). But her instincts are inflamed to the point of obsession by a report from the idealistic young teacher Sister James (Jessica Sanford) that the school’s only black student left a meeting with Flynn seeming upset and with liquor on his breath.

Even with the Church in flux, this remains a patriarchal society in which gender trumps everything; Sister Aloysius is severely restricted in what she can do. As a result, her inquiry only accumulates hints and statements that can be interpreted at least two ways. For most of the evening, the crime is so abhorrent that it’s never spelled out. The references are so oblique that it underscores the shakiness of the accusation. A battle ensues between the two older clergy with the younger nun both used and wooed by both combatants.

A linchpin scene occurs when Sister Aloysius meets with the child’s mother (Rita Joe) in hopes of finding the truth. The stunning “truth” that emerges is light years from the truth she can imagine, and – no spoiler here – does nothing to settle the issue.

You can almost envision Shanley writing the play to stack the deck for the audience’s allegiances, first one on side, then the other, then back again and then intentionally leaving everyone adrift.

The antagonists are polar opposites. Sister Aloysius is simply not likable. You can admire her discipline, devotion, sincerity and eventually her courage, but she is a steely authoritarian who dismisses kindness and compassion as luxuries that pose dangers. She sees the use of ballpoint pens as emblematic of self-indulgent laziness. When Sister James nearly breaks down at her superior’s evaluation of her teaching ability, the young woman cries, “I thought you were satisfied with me.” To which, Sister Aloysius says evenly, “Satisfaction is a vice.” Later, when Sister James says she cannot believe Father Flynn would do harm, Sister Aloysius answers, “You’d trade anything for a warm look.”

Flynn exudes geniality and empathy. His sermons delivered directly to the audience are imbued with such profound compassion that a cynic might wonder if it is self-forgiveness for some unuttered sin. When confronted by Sister Aloysius, he seems far less concerned with his reputation on a personal level so much as how such a claim will cripple his ability to serve the parish.

Of course, a showdown is inevitable.

One aspect is the rigid male-centric hierarchy that enabled abuses and which institutionalized the demeaning of women. Sister Aloysius understands that Flynn can pull rank anytime he wishes and crush her efforts. Neither can she leapfrog over the ineffectual parish monsignor and approach the bishop. No doubt, there is little justice likely to be achieved here. And in 2019, headlines about the abuse and some priests put a slightly darker spin on the play.

In the early scenes, Turnbull, who already has given one of the best performances of the season in GableStage’s The Children, didn’t quite find the cold pragmatism of the nun’s chastened-by-the-world severity and suspicion that Shanley wrote into the play. But in her scenes later with the boy’s mother and in the extended confrontation with the priest, Turnbull expertly fuels her righteous outrage into a perfectly executed confrontation, and then nails the brilliant coda to the evening.

Hardcastle deftly walks the ambiguity that Shanley sought without seeming colorless. In fact, he exudes a welcoming quality that makes him initially a likely injured party in the eyes of the audience. You really want to like his Father Flynn, but don’t quite know what to do with his response to the allegations, to wit, he never quite denies anything; he simply seems too insulted and angry to answer the charge directly.

Rita Joe adds another fine portrait to her growing gallery of credits in a part that has won awards for others including the Academy Award for Best Supporting Actress for Viola Davis. She makes the mother’s initially surprising reactions totally credible.

Sanford, visiting home from New York, has the toughest role. Her young teacher who loves her students is a long ways from her terrific Bonnie Parker in Slow Burn Theatre’s Bonnie and Clyde musical. The problem is that her naïf, desperately trying to navigate a world with accusations she wants to reject, spends 95 percent of the show in uncontrolled trembling and weeping.

For what it’s worth, Shanley has never revealed whether he think the priest is guilty or not. But actors who have taken on the role, like Brian F. O’Byrne and the late Phillip Seymour Hoffman, have said they had to decide so they could play the part – but have never told their view either.

Doubt: A Parable runs through June 9 at Actors Playhouse at the Miracle Theatre, 280 Miracle Mile in Coral Gables. Tickets range from $30 to $75, with 10 percent off all weekday performances for seniors and $15 student rush tickets to any performance 15 minutes prior to curtain with identification. Show times are 8 p.m. Wednesday through Saturday, as well as 3 p.m. Sunday. For more information, call (305) 444-9293 or visit www.actorsplayhouse.org.