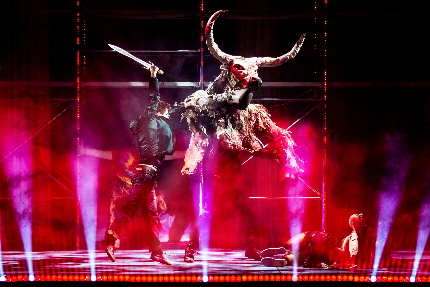 Editor’s Note: This review was commissioned from Alan Halaly of Deerfield Beach High School, a Cappies critic with a better grasp of the material than any of our usual reviewers.

There’s something to be said about the critically acclaimed stories that we grow up with as kids. They are immensely difficult to successfully replicate and translate into performance mediums like the screen and the stage. With shows like Harry Potter and the Cursed Child and Puffs opening on and Off-Broadway receiving commercial success, it seems logical that Rick Riordan’s Percy Jackson universe might be next on the list.

Theatreworks USA’s touring production of The Lightning Thief is what results from mixing a young adult classic with a rock concert vibe à la Rent: a sometimes intense, yet always laid back feel-good romp that will leave audiences wishing that they, too, had a Greek god as a parent.

First premiering Off-Broadway in 2017, the 2019 touring company has retained many of its original cast members. The show was nominated for three Drama Desk awards including Outstanding Musical and won Best Touring Production at the Theatre Fans’ Choice Awards. Although fans were initially disappointed with a movie adaptation of the story, it seems as though the musical version (with a book by Joe Tracz and score by Rob Rokicki) was received much less harshly by the dedicated fan base.

When a self-proclaimed misfit named Percy Jackson (Chris McCarrell) goes on an art museum field trip and is attacked by a mythical creature called a Fury, his life changes forever. He begins to realize that things are not always as they appear. Greek gods are real, and his deadbeat father is one of them.

McCarrell leads the cast with a charming and idiosyncratic take on an infamous hero. He exudes the sort of well-known offbeat humor of the character, taking on a challenging character arc with ease. Also impressive was the fiery spirit of Athenian daughter Annabeth Chase (Kristen Stokes) and the charismatic human-goat hybrid Grover Underwood (Jorrel Javier). As these three characters embark on a godly quest throughout the duration of Act Two, the effectiveness of their ensemble work is beautifully showcased as they begin to open up to each other, realizing that each of their unique shortcomings are not necessarily weaknesses.

Creating believable distinctions between two dissimilar characters is a remarkable feat and can make or break one or both of the performances. Ensemble members Jalynn Steele, Ryan Knowles and James Hayden Rodriguez succeeded while playing several characters. Steele had the burdensome task of playing Percy’s down-to-earth mother Sally, the over-the-top Whitney Houston-esque River Styx ferryman Charon, the ominous Oracle, as well as Silena, daughter of Aphrodite. Being able to showcase such a range of emotion and commanding the stage in every scene she was in, Steele’s contribution to the show was a major one.

Knowles played an equal number of challenging and contrasting characters, including underworld-dwelling Hades, Hawaiian shirt-wearing Poseidon, half-human half-horse Chiron, a sassy Medusa, and the all powerful Kronos. His ability to distinguish each character was astounding, and had the audience truly questioning if all these inane and uproarious takes on mythological creatures were being played by the same actor.

Rodriguez’s take on Aries, the intense god of war was distinct from the misunderstood character of Luke, who ends up being more integral to the story than you might think at the beginning of the show.

Technically, the show is masterfully done from the set all the way to special effects and battle choreography. Lee Savage’s unit set is versatile and supplements the Greek theme with towering columns and set pieces that were used to present a wide variety of situations, such as a bus or a train. Costume designer Sydney Maresca and makeup artist Dave Bova did an impeccable job of aiding the immersion of the audience into this fantasy world of furies, minotaurs and human-animal hybrids. They truly stumped the audience as they tried to keep track of which actor was playing which roles. Throughout the show, the fight scenes were genuinely believable, which is a testament to fight arranger Rod Kinter’s expertise. Although the mixing of the voices and the orchestra was off at times, lapses in microphones earlier in the show were barely noticeable as the ensemble pushed through any problems there may have been.

The show is certainly not for the faint of heart. It will flash bright lights at you, shoot you with toilet paper and confetti cannons, and make you jolt at unexpected and boisterous sound effects. And this does have its charm in creating the sinister ambience of the attic where the Oracle lies, and the rollicking and frisky battle scenes. However, the show succeeded most when it put away all the gaudy and garish effects to reveal poignant moments characteristic of this coming-of-age genre. Such moments came to fruition in numbers such as Annabeth’s (Kristen Stokes) “My Grand Plan,” where she detailed her heart-breaking pursuit of Athena’s approval or “Strong,” where Sally (Jalynn Steele) affirms that what makes Percy different is also what makes him strong.

All in all, I think that for what it was supposed to be — which was a feel-good, heart-warming and comedic show — the show went off without a hitch. Bear in mind the loud noises and bright lights, but it is undeniably a treat for all ages, especially if you are familiar with the Percy Jackson series.

See it while it lasts at the Au-Rene Theater at the Broward Center for the Performing Arts before it takes off on June 30th. The show’s empowering themes of growing up, family, and friendship will remind audiences around North America that “what makes them different makes them strong.” Bring on the monsters, because The Lightning Thief is a one-of-a-kind show that you will not want to miss!

This entry was posted in Performances, Reviews and tagged The Lightning Thief. Bookmark the permalink.