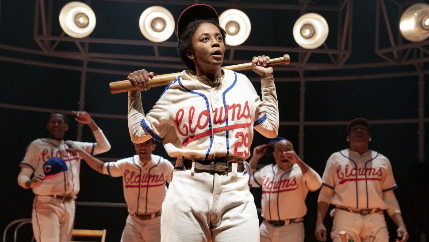 We’re back from our trip to New York to scout out productions you might want to see (or not), shows that might tour South Florida and scripts that might be worth reviving in our regional theaters.  We will post reviews over the next week or so between local productions. The reviews include the Ink and Tootsie. Just search for “Report From New York.”

Live theater’s ability to transport us to different situations and show us others’ stories makes a solid home run in the play Toni Stone, now receiving a rousing, heartfelt production through Aug. 11 at the Roundabout Theatre Company’s Laura Pels Theatre in New York City.

Lydia R. Diamond’s wonderful new play about the first woman to play professional baseball in the Negro Leagues melds comedy and drama as it tackles racism, sexism, ambition and the sacrifices it takes to be a pioneer. Mixed in with that are issues of social change, identity and resilience woven in a snappy script in which laugh-out loud humor and gut-wrenching pathos often merge in the same sentence.

Few people may have heard of Toni Stone, and that’s the point of the play—to give a voice to those forgotten historical figures. Toni Stone is based on the book Curveball, The Remarkable Story of Toni Stone by Martha Ackmann. There also are numerous articles about this real baseball player on the internet. Just google her.

Toni Stone follows her from her childhood during the 1920s in St. Paul through the 1950s, touching on her years with men’s exhibition teams and her landmark first at-bat for the Indianapolis Clowns. Toni’s obsession with baseball began with the ball itself that “fits right in your hand” and the “weight of the ball in your hand.” Toni—the luminous Obie Award winner April Matthis—reflects that “My life is about having it in my hand. The ball is what I need.”

As a child, Toni yearned to play ball with the boys, seeing no reason why she couldn’t. Her parents were against it, feeling that the sport would not help her settle on a career or a stable life as she grew up. They finally relent when their parish priest convinces them that she belongs on the field, that being in the game is part of who she is. The all-boy Little League team accepted her as a teammate, in a way. The other players, the priest says, would rather deal with the humiliation of having a girl on their team than the continued humiliation of always losing.

Throughout the play, Toni is flanked by her male teammates. In addition to being baseball players, the all-black cast members also assume other roles, including an Irish priest, a white team owner and a white coach of a boys’ team. They are Stretch (Eric Berryman), King Tut (Phillip James Brannon), Spec (Daniel J. Bryant), Elzie (Jonathan Burke), Jimmy (Toney Goins), and Woody (Ezra Knight). Harvy Blanks doubles as a player and as Alberga, a businessman who eventually becomes Toni’s husband, and Kenn E. Head who doubles as a player and as Millie, a prostitute who becomes Toni’s confident.

After introducing her teammates, Toni tells the audience that they may not remember who each player is but “it matters that I tell you their names.”

In Toni Stone, baseball works well as a metaphor for the changing social climate, the effect of the Jim Crow laws and the evolution of sports becoming more diverse. (Jackie Robinson’s move to the Brooklyn Dodgers is referenced.) The team was forbidden to stay at hotels, so often they bedded down at fans’ homes or, more likely, at the local brothel where Toni at least got her own room. It’s in that brothel that she strikes up a friendship with Millie who tells Toni that she is playing for all of them.

During games with white opponents, the black players were subject to racial epithets from the white players and audiences, and often kicked and beaten on the fields with Toni receiving even worse treatment. The role of the Indianapolis Clowns, Toni says, was to come out, give a humorous show and then lose to the white players. “But sometimes, you just don’t have the lose in you,” she says. The effect of the team’s exaggerated antics, meant to mirror a minstrel show, begins at first as a humorous skit that quickly turns into a chilling end to the first act, allowing the audience to put themselves both in the situations of the fans and the humiliated players.

Matthis’ insightful performance pulls the play together as she delves into Toni’s unusual personality, sharp humor and her tendencies to take everything literally. When a teammate says he wouldn’t kick her out of bed for eating crackers, she wonders why anyone would eat crackers in bed. “They’re very messy,” she deadpans without an ounce of irony.

Each of the male actors takes center field with Blanks and Head standouts because their roles are meatier.

The simple yet effective set features bleachers, bats, floodlights and posts meant to convey the field. This set allows some teammates to play in the background as Toni talks as well as serve as a symbol of segregation.

Bill Hirschman, editor and chief critic for Florida Theater on Stage, and I have a running conversation at just about every play we see whenever we travel: Which South Florida theater would/should produce this play or musical.

When we saw Heathers, we instantly knew it was a fit for Slow Burn. Eventually, I hope The Prom lands at Slow Burn. The Academy was tailor made for The Maltz Jupiter Theatre. The pocket musical An Unexpected Joy would be perfect for Actors Playhouse or Slow Burn in the Broward Center’s the Abdo Room. We knew that Zoetic would pick up American Son, which is on tap for its next season.

So I think that M Ensemble (bring back the Carbonell winning cast of The Kings of Harlem); Slow Burn, Palm Beach Dramaworks, Zoetic, Theatre Lab, or GableStage would be good contenders for Toni Stone. As for the title role, Karen Stephens or Rita Joe would knock this role out of the ballpark.

This entry was posted in General and tagged Lydia R. Diamond, Toni Stone. Bookmark the permalink.