Pigs Do Fly’s 2 Across Is No Puzzle, Just a Warm Comedy 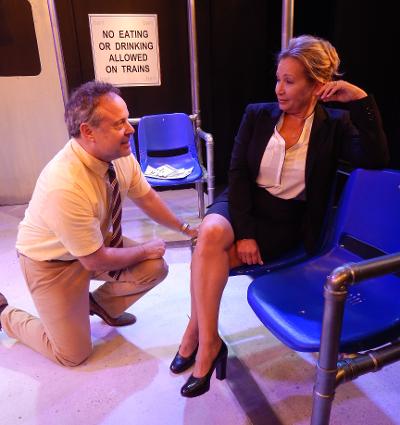 David R. Gordon tries to connect with Michele Verdi in Pigs Do Fly’s 2 Across / Photos by Carol Kassie

Fortunately, the Ft. Lauderdale-based nonprofit professional theater company, Pigs Do Fly Productions, is giving Mayer’s warm, compelling play a believable and energetic production through March 20 in the extremely intimate Empire Stage.
It is a production that is often on the move. Indeed, a Bay Area Rapid Transit (BART) train is hardly the only thing in motion.

Deborah Kondelik directs with verve and a comedic touch. Also, her pacing is just right.

In this play, which features a noodle-thin plot, an odd couple are aboard a BART train at 4:30 a.m. on a Saturday in April in 2003. They are all by themselves. About the only thing they have in common is that they are both working on Saturday’s “New York Times” crossword puzzle.

Wisely, Kondelik often has the actors in motion. For one thing, it keeps the production from becoming stagnant. In addition, the directorial choice illustrates that the characters are not only trying to solve a puzzle, they are actively trying to solve each other (and perhaps themselves), and their problems.

And, so, the pair moves around the square-shaped train car, sizing each other up from different angles and positions. Often, when one character is passionate or on the offensive, the person leans into the other, who leans back as though under attack. When the characters, Janet and Josh, seem happy with each other, their relationship seems to be progressing toward something positive. During more tense scenes, the relationship appears to be regressing. Yet at other times, it seems stuck in neutral. However, for much of the time, this production, like the BART train, moves – and we find ourselves glad to go along for the entertaining and invigorating ride.

Janet and Josh seem about as different as Oscar and Felix from Neil Simon’s The Odd Couple. Speaking of Simon, the zingers in 2 Across, as well as its combination of comedy and pathos, might bring to mind that late, prolific playwright.

Janet is a working psychologist who is organized and believes in following rules. Also, she’s a pro at solving crossword puzzles, and she finishes them. To her, that is important.

“Crosswords are a metaphor for life,” Janet tells Josh, an ex-advertising executive and actor. “Those who finish, succeed, those who don’t, fail.”

Unfortunately, the disorganized Josh always quits in the middle of working his puzzle. That is, until he meets Janet.

While the two can frustrate each other, they also intrigue each other. In at least one scene, they argue. But not long after, they make up. They may disagree, but they help each other with problems. And they are willing to show their vulnerability.
“I need help solving me, and you’re my 900 number,” Josh tells Janet toward the play’s end.

Expect surprises throughout this play. And Mayer will hold you in suspense until the end. To be specific, time seems to be running out for this couple to establish a lasting relationship. As they argue, an automated voice announces stops along BART’s route, suggesting they’re inching closer to the final stop, at which point they may part for good. Of course, we root for them to stay together.

That is largely because the actors, David R. Gordon and Michele Verdi, play their characters as spirited individuals who are likable even when they exhibit less-than-desirable traits.

For instance, in the beginning, Janet is crying. She just wants to relax with her crossword puzzle. The last thing she seems to need is the friendly yet persistent and some may say annoying Josh badgering her with comments and questions. As a result, Janet is short and irritable, but Verdi avoids turning her character into a mean person.

Verdi delivers a well-rounded performance as Janet, convincingly capturing varied emotions, from heartbrokenness to competitiveness. She can be funny, such as when she tells Josh that a dog once followed her home.

“He wasn’t married and I had him neutered,” she tells Josh after he wonders about the couple’s future together. Verdi says the line in a deadpan manner, the kind that earns laughs.

But Verdi is also believably uptight and upset, as well as sarcastic and competitive. In addition, she convincingly speaks with a mother’s love when she talks to her son on the phone. The young man is traveling to basic training before entering the armed services. And Janet is worried that she will never see him alive again.
Meanwhile, David R. Gordon injects Josh with seemingly endless energy, a competitive edge, endearing awkwardness, and a flair for the dramatic.

Gordon, whose expressive eyebrows might remind you of Nathan Lane, last portrayed Josh when Pigs Do Fly presented the play in 2019. Even so, it sounds as though he is saying Josh’s words for the first time.

While the performers are undoubtedly talented, emotions powerfully come across in a theater the size of Empire Stage. Indeed, three rows of seats face the stage. If you sit in the front row, you are practically seated onstage.

Scenic designer Ardean Landhuis’s set consists of chairs arranged in the shape of a square. Upstage, a sign reads “No eating or drinking allowed on trains.” Also, we see a BART map against the wall. The set is simple, yet effective; it indicates the play’s setting without calling too much attention to itself. Similarly, Preston Bircher’s realistic, yet basic lighting illuminates the stage.

Meanwhile, we hear noises that sound just like a moving and stopping train, thanks to sound designer David Hart’s solid work.

In lesser hands, 2 Across might have become a stagnant tale. Instead, lively characters who change throughout the course of the play, as well as humor, action, and pathos infuse the piece. It grabs and keeps our interest. Perhaps, it will also move you to do a crossword puzzle to see how it might change your life — just as it has changed Janet and Josh.

Pigs Do Fly’s production of 2 Across runs through March 20 at Empire Stage, 1140 N. Flagler Drive in Ft. Lauderdale. Performances are at 8 p.m. Friday and Saturday, as well as 5 p.m. Sunday. You must wear a mask which covers your nose, mouth and chin at all times while in the building. For tickets, go to https://web.ovationtix.com/trs/pr/1106195.