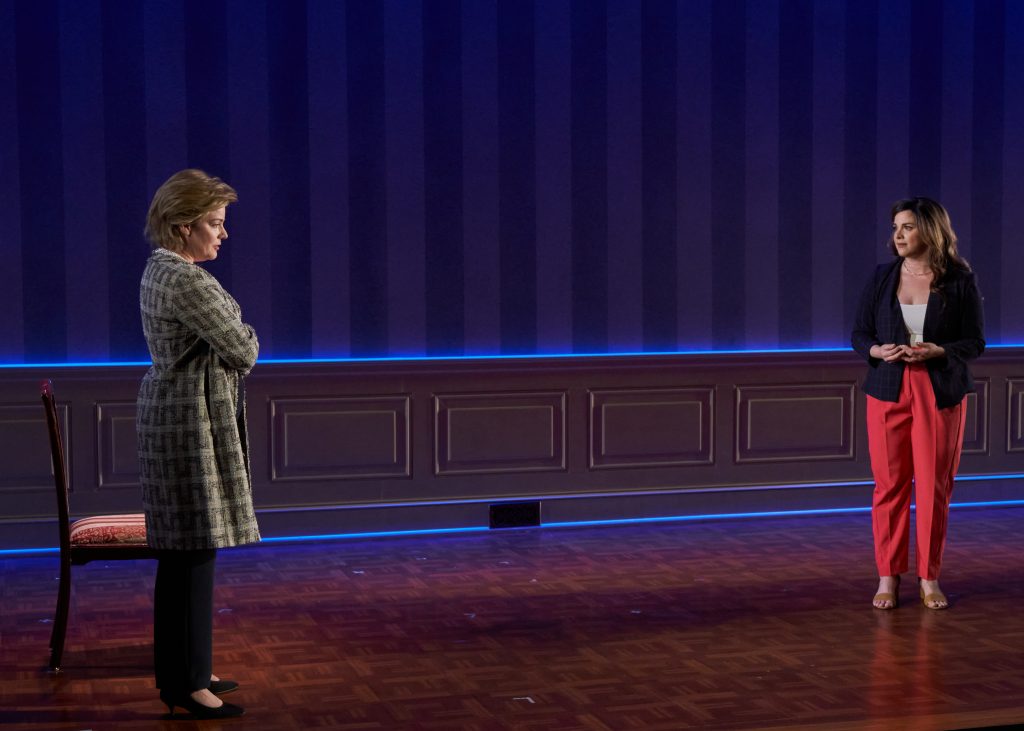 If you’re expecting Miami New Drama’s world premiere When Monica Met Hillary to be some D.C. spin on an Andy Cohen catfight, you’re going to be disappointed — thank goodness.

Indeed, the title confrontation with its incisive observations is only the final 20 minutes of an 85-minute play that charts the two women’s journey from Monica Lewinsky’s first “tryst” with President Bill Clinton in 1995 to a fictional meeting in “the future” with Hillary Clinton after her election loss.

The prior hour tracks both women individually struggling with the emotionally traumatic events with tears, anger and considerable guts.

Especially noteworthy: While Miller has considerable compassion for both women – maybe initially favoring a naïve Monica who never sought the crippling suffocating firestorm – the playwright doesn’t take sides or make moral judgments. There is no resolution when the curtain falls, no closure.

Which makes sense because that’s not what Miller and Bordelon are seeking, it seems to this critic. Their goal is to underline the aforementioned clashing socio-politico-gender issues that come to the forefront out of the conflict. Certainly, audience members may be swayed to side with one woman or the other. But with deeply felt passion and flashes of gallows humor, the play depicts what it must have felt like for both parties being trapped inside a painful and costly tragedy for everyone involved.

On one level, everything circles around the complexities of who bears what percentage of the blame. But underneath is the deeper need to take responsibility for their actions if people are to get on with their lives, sadder but wiser.

A dramaturgical achievement early in the production makes credible Monica’s incognizance to the ramifications of her affair. Monica is telling her mother Marcia about her first coupling with Clinton, expressed with the senselessly joyful confession of a high school junior telling a girlfriend about having sex with the football captain. As she glows and bubbles, the words pour out of her, completely insensate about the gravity of what she has done. Correct or not, defensible or not, it offers a plausible answer to the question so many people had at the time: “What the hell was she thinking?

Due to the confluence of the skill sets of Miller, Bordelon and actress Kyra Kennedy, amazingly, the audience doesn’t turn on her during Monica’s ecstatic exchange with her mother played by Mia Matthews:

MONICA: “We go back into the hallway, and he says he missed me! Kissing him is like nothing I’ve ever– it’s magical! And we fool around–he let me go down on him.
MARCIA: Let you? Monica, he has a wife.
MONICA: It’s his marriage not mine.

Still not appreciating why the FBI wants her to wear a wire or go to jail, she complains, “It’s a private matter between two consenting adults. It’s not against the law–how can they do this? We did nothing wrong.”

But Kennedy convincingly charts Monica evolving through a clear series of maturing stages as she increasingly realizes the import and damage she is responsible for (in part). It may seem hard to believe, but in the early stages of the media tsunami, we actually feel compassion when she says, “What if I’m 30 and this is still my life? My life is ruined!… I don’t want my obituary to be I gave the president blow jobs.”

Years of maturation later, after she gives an inspiring 2015 TED talk “The Price of Shame” (a true event you can find on YouTube), she consoles her mother with her own intoned mantra” “I am not that Monica. That’s the past.…I’m not that Monica. I am not helpless.”

Kennedy recreates part of that speech – and Monica finding a purpose in life to champion: “Public shaming as a blood sport has to stop. I was Patient Zero of losing a personal reputation on a global scale almost instantaneously.”

Her performance is matched every inch by Danielle Skraastad’s fierce Hillary, the embodiment of intelligence, competence, hard-won wisdom, toughness and self-control forged from years in no-holds barred combat. When her supremely loyal aide, Huma, is thrust into a similarly devastating political scandal by the idiocy of her own husband, Anthony Weiner, this Hillary quietly firmly fires off control orders honed by personal experience.

“Feels like a ton of bricks dumped on you. I’ll tell you something: It’ll bruise, it’ll leave a scar, but it will not break you.”

She has come to a separate peace with this difficult painful aspect of her marriage, exemplified when she stood by Bill in her way while not forgiving him for a second.

“My decisions were in the best interests of my marriage, my family, and this country. No more and no less. To this day I take my vows very seriously. The bond I share with my husband is unbreakable. … A tiger cannot change his stripes. I knew every inch of Bill’s character before I married him. I turned him down twice before I said yes. Women love Bill. Bill loves women. He respects women. He is not the kind of man who is a predator. It’s not in his DNA. He doesn’t need to seek, women want him. I understand it. I feel the same way.”

Much of the time she does not come across as cold, but clinically efficient and confident. But occasionally, the profound depth of a long parade of pain pushes her to explosions of anger and passion.

“I don’t have the bandwidth for feelings! Too much to do. Timing couldn’t be worse. Forgive me, I can’t be mother hen around here!”

But the real strength of the script, direction and performances culminates in the face off scene. We wish we could quote pages and pages of the complex concepts at war with each other. It has to be seen to be fully appreciated.

Monica has come to apologize with a profound contriteness and exposing her vulnerability, having realized the depth and breadth of what she has done to Hillary, let alone herself.

“I falsely believed I wasn’t hurting anyone because I only saw what I wanted to see. You deserved every ounce of my respect. Instead, I violated and endangered the bond you shared…. What I did was unforgiveable.”

But Hillary is having none of it – not because of the personal damage she has suffered but because she feels Monica still doesn’t get it. The young girl had betrayed and erased in the public consciousness the tentative advances that the sisterhood had made in improving society’s respect for women.

Bitterly, the woman who spent her life smashing through glass ceilings, fires out,

“There is a LEGACY Bill and I share–we worked for more than fifty years apiece to build it. You do not deserve to inherit any of that legacy. You should wish to erase yourself from it because you are famous for having had oral sex with a man who was married and the sitting president. What is that hunger you can’t fill? Do you even ask why you are putting yourself in the spotlight again or who needs to hear anything you have to say? Why not leave it to the real feminists who have been in the trenches and have achieved.”

But Monica stands her ground without rancor.

“You were not a girl coming of age in the 90’s. We were proving we were the new feminists.  We were told everything the patriarchy denied women since Eve, was our birthright. We were the Third Wave. Encouraged to dress how we wanted and refuse slut-shaming, to want sex and have it. Cosmo and Ms. Magazine said, be confident, own your desire, have multiple orgasms! We thought we were liberating ourselves but maybe we were just being exploited — because it’s still the same unliberated world. My generation is the legacy of what yours fought for. We wanted to be good feminists.”

“You were not taken advantage of, you were a victim of your own foolish choices. You do not have a God-given right to paint with a brush that does not apply, but every time you tweet out a hashtag Metoo, or make some wisecrack about your ordeal, your suffering, you undermine every victim who was actually violated, who didn’t give their consent….. No one told you to flash your thong at the president… You were an autonomous woman with no repercussions for closing your legs or your mouth and keeping your hands to yourself.”

Miller, who wrote the trenchant In Darfur performed by Mosaic Theater in 2009, fills her script with frank and profane dialogue as well as single lines that reverberate. While there is Truth in the underlying work and Miller did considerable research, she notes in the script “These four women in this play are a work of dramatic fiction; their words and actions are my invention and liberties have been taken.”

It helps immensely that the Playbill includes a detailed chronology from Bill Clinton being sworn in in 1993 to Hillary Clinton’s 2016 loss to be President. If you did not live through these years and remember all of the headlines, the play might lose you as Bordelon propels the narrative at lightning speed. So younger audience members might ask, “Who’s this Linda they are talking about”” or “Who is this Weiner guy posting underwear selfies affect?”

Bordelon, yet another New Yorker brought in by Miami New Drama, does little in showy staging – mostly people literally stand around and talk to each other. But her ability to help craft these performances in their complexity and infuse the precise and elusive tone is nothing sort of a marvel.

Matthews is note perfect as Monica’s mother and Rasha Zamamiri creates a three-dimensional Huma, intensely loyal and admiring of her boss.

Kudos to Dina El-Aziz’s period perfect clothes and Carol Raskin’s wigs, which change for Monica with every scene.

There is a trend worth noting here. Along with GableStage’s current The White Card, Boca Stage’s Luna Gale, Palm Beach Dramawork’s The Duration and Miami New Drama’s A Wonderful World, this work reaffirms local theater’s commitment to thought-provoking timely new plays, many of them world premieres that they have invested in their development, expertly delivered.

Covid Policy:   All guests ages 5 and above will be required to wear a mask over their nose and mouth at all times, regardless of test or vaccine status. All guests over 12 years of age must provide proof of a negative COVID-19 PCR test taken no more than 3 days prior to the performance date OR proof of a dated negative COVID-19 antigen test taken no more than 24 hours prior to the performance.