Report From New York: A Terrifying Portrait Of Dementia In The Waverly Gallery 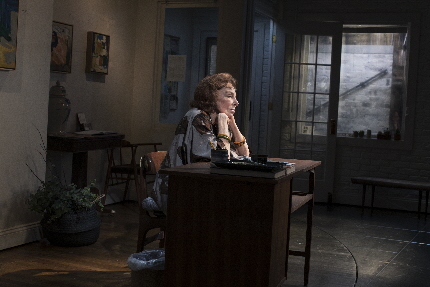 Elaine May in The Waverly Gallery / Photos by Brigitte Lacombe

If you are or have been the caregiver to a senior suffering with dementia, delusions and/or Alzheimer’s disease, the revival of the play The Waverly Gallery is a pain-riven reminder of the mutual agony.

If you aren’t in that dilemma yet, be assured that this production featuring an unforgettable performance by Elaine May is a precise preview of the agony to come. And yet, it is a production not to be missed.

What this specific edition captures so well is that everyone from the victim to the loved ones is blameless. Therefore, terrible guilt accompanies the eruptions of anger that are inevitable because of the frustration for both sides of this human equation.

The tone set by Neugebauer, an experienced off-Broadway director making her Main Stem bow, is actually quieter and more sorrowful than the preceding paragraphs would suggest.  The anxiety level rises slowly but steadily like flood waters of a river, but the few moments of unleashed passion are carefully selected from Lonergan’s script.

Lonergan, indeed, was reporting on what he experienced with his own grandmother, but without looking on the Internet, I’d bet that May and Neugebauer must have either direct experience or spent in-person expeditions to reproduce this not just accurately overall but with finely-observed detail.

Crucially, Neugebauer and the cast also embrace the copious comedy from the family’s saving gallows humor that Lonergan has woven throughout to keep the evening bearable.

The play opens as the feisty Gladys tends her neglected Greenwich Village art gallery, regaling twenty-something grandson Daniel with stories of her vibrant past as a leftist radical and neighborhood fixer. Initially, the askew conversation seems to be a simple matter of her not operating her hearing aid properly. But it becomes clear that this once incisive mind has been fraying for some time now. She has told every story many times as indicated by loving patient Daniel, often saying, “I know.”

Presaging a technique soon to become familiar, he stops trying to correct her misperception that he works for a newspaper. At this moment, it is just an innocent way of not insulting her disability. But that tiny surrender to her encroaching senility proves to be a resounding crack, acknowledging the disintegration of not
only her vital lifeforce, but also her family’s honesty in dealing with her.

Over the two years depicted, her deterioration worsens by inches. The exact forgetfulness that causes the audience to laugh in the opening scenes devolves into a source of anguish.

Daniel’s mother Ellen and stepfather Howard refuse to put this independent spirit in a nursing home. They “thought it was better for her to be at risk alone in the gallery than to be locked in her apartment all day long,” says Daniel who lives in an apartment behind her and near the gallery. But the family dreads the emotional black hole of caring for her. While their impotent frustration and fear grow, they struggle to preserve the bedrock of devotion.

Trying to protect her and the family’s sanity, the loved ones inexorably sink into what can seem cruel coping mechanisms and even sharp remarks. “Do as you’re told,” the daughter says at one point. The mother tells the daughter like a child, “I always do what I’m told.”

A turning point occurs when the hotel owner from which she has rented the gallery for three decades decides it needs the space in six months. The family fears her reaction, but Gladys grins and says, “Well, good then. I’ll give it up and that’ll be that for that, and I’ll get a job being a lawyer.”

Throughout, up to the final moments of the play, Gladys is a voluble storyteller who gets lost in long monologues about her past. But her family, to survive, eventually comes to ignore her as she rambles incoherently in the ether, carrying on their own conversations and tasks as her mind wanders in back alleys with dead ends. But the truth is, they couldn’t ignore her completely if they tried – and they don’t want to.

Essential to driving the tragedy is how the actress playing Gladys (Eileen Heckart when the show first premiered) must simultaneously document the deterioration that started before the play opens and to make inescapable how vital this person was for some many decades.

As Daniel tells the audience, “Her mind was smashed to pieces, and the person she used to be hadn’t really been around for a long time…. But the pieces were still her pieces.”

So it is a minor miracle that Elaine May’s performance is so stunning. Yes, she has not acted on Broadway in more than a half-century when she was delivering her brilliant comic creations with Mike Nichols. Since then, of course, she has been a major force as a stage playwright, screenwriter, film director and occasional film/television actress. But this is the kind of iconic stage performance people talk about for years to come, much as they will with Glenda Jackson in Three Tall Women. 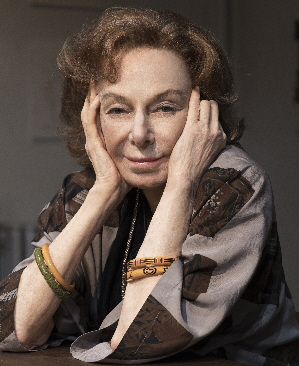 At 86 years old, May’s appearance and her vocal quality obviously differ from the iconic memories (and You Tube videos) we still have of her youth. But there is still in her Gladys that recognizable broad smile, that light in the eyes and the slight flip tone of a highly intelligent mind who knows she is being funny. The latter is Gladys not May because this naturalistic performance never feels like the carefully-calibrated work that May and Neugebauer must have labored to produce. Gladys simply is.

Her Gladys is, for much of the journey, a surprisingly good-natured, pragmatic survivor of tragedies who is willing to take on challenges.  But underneath she is deeply unnerved that her mind cannot be trusted, even as she forgets that she is forgetting.

Neugebauer’s leadership in molding this production is not showy but obviously crucial from the overall pacing to her mastery of Lonergan’s intentional overlapping dialogue in which people are not listening to each other (especially Gladys) since they already know what is being said has been said 50 times before or it’s simply nonsense.

The rest of the cast is unassailable, especially Joan Allen as the long-suffering daughter trying desperately not to surrender to the terrifying prospect of having to take Gladys into her home. Film actor Lucas Hedges is the grandson balancing humor with rising frustration, and fear. TV and film star Michael Cera is a strangely off-kilter and naive artist displaying his work in the gallery. David Cromer, an acclaimed Chicago director-actor known for Our Town, is the therapist son-in-law trying to keep everyone on an even keel as long as possible. The three men’s work is solid although none of them seem irreplaceable.

New Theatre produced this in 2001 starring Sally Levin. This Broadway outing makes it clear this is long overdue for a local revival.

The Waverly Gallery is playing through Jan. 27 at the Golden Theatre. Running time 2 hours 15 minutes with one intermission. For more information go to https://thewaverlygalleryonbroadway.com/

One Response to Report From New York: A Terrifying Portrait Of Dementia In The Waverly Gallery