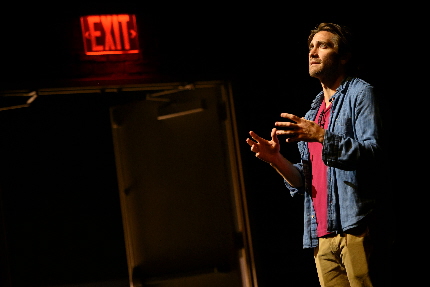 Fathers — becoming one, being one and losing one — are the connective tissue of Sea Wall/A Life, the emotional double bill of two one-acts currently at the Hudson Theatre in New York City.

While the performance of handsome, and quite charming, movie actor Jake Gyllenhaal may be the initial draw for many theatergoers, he is not the star. The two scripts are — Sea Wall by Simon Stephens (who adapted the Tony Award-winning The Curious Incident of the Dog in the Night-Time for Broadway) and A Life by Nick Payne (Constellations that also featured Gyllenhaal).

These two plays, each a monologue clocking in at a little under an hour and deftly directed by Carrie Cracknell, delve deep into the emotional life of its characters, often melding tears and laughter in the same sentence — a combination that allows most of us to deal with life.

In Sea Wall, the production’s first act, British actor Tom Sturridge portrays Alex, an affable young London photographer. “People say I am likable,” he says almost modestly. And he certainly is. But it is obvious from the start when he sits on the bare bones stage for a while before the play begins that he also is broken. Something has shattered him, and he will never recover.

A couple of times a year, Alex and his wife Helen would travel to the home of her widowed father, Arthur, in France. A gruff, former soldier turned math teacher, Arthur loves his daughter unconditionally, and, as a result, loves Alex. The two men spend time together with Arthur showing Alex the joys of scuba diving, and taking him to the sea wall where the silence is overpowering. Alex enjoys his father-in-law’s company and their long conversations about life and God. Alex delights in saying the names of the French towns in an exaggerated accent. When Alex and Helen’s daughter, Lucy, comes along, the trips become more frequent and the adults adore this intelligent child.

But then the story takes an unexpected turn. Sturridge easily makes the shift from this happy man thankful for his life to barely being able to cope when a tragedy happens. Alex is no longer the articulate photographer but as fragmented as the item that stuns him when it breaks on stage. He loses his words, unable to finish some sentences and forgetting thoughts in midstream.

Sturridge, most recently on Broadway in 1984 and in Orphans for which he received a Tony nomination, delivers an effective performance, never breaking character even when his most poignant speech was interrupted by an emergency alert from a cellphone. The New York Times and I must have been at the same performance because as Sturridge is laying bare Alex’s soul in one of the disjointed speeches the cell phone is so loud it seems to reverberate off the Hudson Theater walls. He pauses, says “It’s Okay, it happens” as if it were planned. (Note: Turn OFF the cell phones, folks. Just muting or airplane mode will NOT stop an Amber Alert or emergency weather from blaring.)

As Abe in A Life, Gyllenhaal initially runs across the stage, trying to turn off the lights, failing, pulling out the flashlight app on his cell phone, failing again, until he finally succeeds (thanks, no doubt, to lighting designer Guy Hoare).

Gyllenhaal is ever engaging and appealing as the hapless and befuddled Abe. Abe’s scattering about is, no doubt, because he has recently learned he is to be a father. And this most welcome news has Abe remembering the loss of his own father and how that death influenced so many of his life choices. He is both ready to be a father, and not. “I am a son, not a father,” he stammers.

A Life exists in a parallel time frame as the pending birth — and his daughter’s arrival — alternates with the death of Abe’s father a couple years ago. The time switch works as so many of us remember past events as we deal with today’s situations.

A Life works as a bittersweet play as Gyllenhaal toils in that schism of tears and laughter that are often a part of memories. Sometimes our most painful situations evoke laughter. At one point, Abe is so caught up with his story that Gyllenhaal runs through the theater, and walks through rows, saying “excuse me,” telling more than one patron they can go back to sleep in a bit. Abe is the more showy role but Gyllenhaal tamps down his movie star image. Gyllenhaal clearly loves doing theater and it shows.

Laura Jellinek’s set for Sea Wall/A Life is an effective bare bones red brick wall with two levels and a ladder on which Sturridge spends the first several minutes and a piano that Gyllenhaal plays at the end as a tribute to Abe’s father.

Gyllenhaal and Sturridge have worked before, most recently in the Netflix film Velvet Buzzsaw but Sea Wall/A Life are individual pieces and neither interacts on stage, adding to the poignancy of each’s monologues. The only time they are together is during the curtain call when they then walk off stage, their arms around each other.