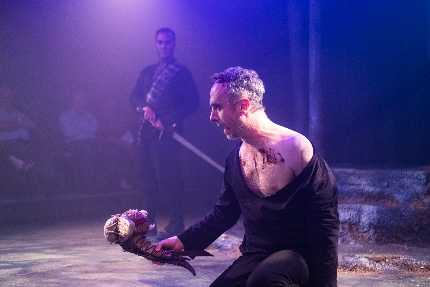 The rarely spoken of deficiency in offerings and performance in local theater is Shakespeare. Only a handful of local actors and directors – superlative in so many other genres — have the training and the experience-honed expertise to deliver even barely adequate and rarely scheduled productions of the Bard.

Some companies have made attempts over the years – Palm Beach has held a summer festival for years with mildly pleasant results. But most forays have been well-intentioned yet lacked the skill and the polish to make the potential magic a reality. And some companies we won’t even mention have produced works painful to watch; they must have dissuaded audience newcomers to Shakespeare’s work to stay far away in the future.

But things are slowly changing. Actor Peter Galman, who does have the chops, appeared in a non-traditional but interesting King Lear at Thinking Cap Theatre and he has founded the Shakespeare Troupe of South Florida that holds workshops and productions in school.

And now comes New City Players operating out of the Vanguard Sanctuary for the Arts in Fort Lauderdale, a company that has delivered consistently solid work with contemporary titles such as Raisin in the Sun, Art, Constellations and True West.

Two years ago, New City Players produced a merry, delightful edition of Twelfth Night whose cast’s talent for the verse ranged all over the map. But it exuded so much verve and infectious fun that Shakespeare himself would have chuckled at the inventive vision of director Jessica Schulte and her band of clowns.

Its current Macbeth may have weaknesses, but its strengths make it one of the best Shakespeare productions the region has seen in recent years – well worth supporting and encouraging for future titles.

Visiting director Tracy Manning has forged a bloody tale of power, greed and guilt set against an eerie world in which inexorable fate combines with human frailties.

Among the many achievements (exceedingly rare in local productions) is that every member of the 14-member cast issues forth their lines with a smooth fluidity that speaks to hours and hours of rehearsal together and in private. Only a few master the innate poetry of the language, but everyone’s comfort with the verbiage is admirable.

Similarly, much of the time, the actors under Manning’s leadership make the top layer of meaning clear enough that audiences can easily follow the narrative, always conscious that the first job is to tell a story. While she sets up tableaus, much of her work is an ever-flowing kinetic staging that injects a sense of action even in scenes dominated by speeches,

Seth Trucks, another of the few experienced Shakespeareans in the region, is especially polished in his delivery as He Who Must Nor Be Named Other Than On Stage. Physically, Trucks is shorter and slighter than nearly everyone in the cast and not the image of a battle-hardened warrior. But his careful incisive analysis and exploration of Macbeth’s character is unassailable. While his Macbeth is not especially regal or commanding in groups, Trucks inhabits Macbeth’s growing guilt-fueled anguish in well-pitched interior monologues that he addresses to the audience as if they are his judgmental conscience.

Laura Plyer, best known locally as a gifted musical theater actress, was the revelation of the production as Lady M. More than anyone else on the stage, she merges the beauty of the music of the words, the clear communication of the meaning and the powering thrust of emotion. Her face mirrors the interior of her soul such as the gleam of avaricious achievement at Macbeth’s coronation. The mad scene, usually a tough sell, is completely credible.

If the two actors do not share that mystical chemistry gifted by the theater gods, Manning ensures they are a convincing couple by having them clutch each other and cover each other in kisses at every opportunity.

Jordon Armstrong, who was in Constellations with Schulte, has three small parts, but he is just as smooth and polished in his work here as Plyer. With Manning as a guide, Armstrong provides a welcome slapdash of humor in the midst of the blood-letting as the scruffy drunken loose-limbed Porter.

The “weyard” sisters Rachel Finley, Courtney Posten and Jessica Schulte are wonderfully creepy, crawling all over the stage and issuing unearthly groans, moans and guttural utterances from the wings to amp up the atmosphere.

The virtues also feature evocative design work, including the wood-and-stone steps flanking the haze-engulfed playing area by Ryan Maloney; the costumes of leather, metal studs, tunics, tartan accents and work boots by Leslie Cook, and especially the deftly created and effectively melded elements of lighting design by Connor Reagan and sound design by Ernesto Gonzales with Celtic fiddle music and war-like drums cementing the eerie vibe. Given the limited budget, their work is worthy of award consideration.

The stylistic stage combat is choreographed by Robert Aronowitz who has supplied the extensive cutlery including a wicked curved knife kept at the back of Macbeth’s belt whose very appearance promises violence like Hedda Gabler’s pistols.

On the other side of the ledger: the magic just isn’t there. The sense of a spiraling tragedy is evident only in the text, not the production. With the other virtues in the production so clear, patrons yearn for more depth and complexity.

For instance, characters like the Macbeths say one thing in public with a calm even amiable demeanor, but are in severe distress underneath. That under-layer is never hinted at in performance in those scenes when they are dissembling for others.

A clearer example: Malcolm tests Macduff’s loyalty when he rebuffs entreaties for him to be the next king. He goes on at great length about how he is too sinful to lead a country (Okay, no current relevance there.) It is hogwash meant to see how loyal Macduff will be, but the actor and director have him deliver it with outsized passion as if it Malcolm meant every word. But he doesn’t. And there is nothing in the delivery indicating that this is a ruse. So when Malcolm pivots and says, yeah, he is willing to be king, there has been no foundation laid in the acting and it makes no sense.

To be fair, Shakespeare is the Mount Everest of theater and Macbeth is far from his easiest work to pull off. We saw an A-list production a few years ago at Lincoln Center directed by the brilliant Jack O’Brien and starring Ethan Hawke who is as fine a stage actor as he is a film actor. And it was, to be gentle, mediocre.

So credit where credit due.

Several notes: First, the initial weekend sold out, so get tickets early if you are interested.

Second, If you come early, read the program, which has a scene-by-scene synopsis of the slightly edited text as well as a cute list of character featuring droll sketches of family characters like you see on the back of someone’s stationwagon plus even cuter descriptions such as Fleance: “Banquo’s son, fortuitously good at running away” or Duncan: “Rather avuncular, totally doomed.”

Third: In the interest of social media promotion, patrons are being encouraged to shoot photos and video in the short opening battle scene to send to friends after the show, and then expected to turn them off.