Report From New York: The Prom Is Very Strange Strangers In A Strange Land 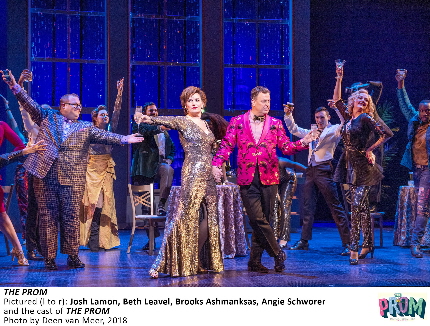 Usually in “fish out of water” comedies, the fish are surprised to find themselves out of water and spend most of the evening trying to get back to familiar aquatic climes. But in the hilarious new musical The Prom, the fish knowingly leap out of the bowl, certain that their unique skills will be a long-desired boon to the camels and Bedouins.

In both, the laughter subsides long enough for everyone to learn something and end the evening celebrating their new found knowledge.

The basic premise of the show that opened this month at the Longacre Theatre is a quartet of self-absorbed Broadway-diva types are dismissed by critics in their latest Main Stem extravaganza (The Eleanor Roosevelt Musical) as being past their prime and too irrelevant to merit much consideration or attention anymore.

To get back on the front pages or the most Facebook likes, the washed-up stars seek out a cause to champion, with less altruism than opportunism in mind. They target a small Indiana town whose high school has cancelled the senior prom rather than cope with one student’s request that she be able to invite her girlfriend as her date.

The quartet and their entourage including a non-Equity tour of Godspell descend like pith helmeted members of a Margaret Mead expedition to a benighted jungle tribe in desperate need of attitudes and enlightenment that the natives don’t know they need. Emma, the highly likable teenager in the middle of the maelstrom, is at first mesmerized by the visitors and then angry when she has to pay a stiffer price for her resistance to the small town mores after the quartet interfere.

While the townies’ bigoted hearts and prejudiced minds are magically won over, as in most “very special” Disney/Lifetime films, the script acknowledges that the strangers in a strange land initially do more harm than good out of their self-assured ignorance and assumption of their moral (and cultural) superiority.

The two groups’ corresponding journeys are all about self-discovery and similar Aesop-worthy morals. But what makes the audience’s trip worth the effort is the gleeful collision of the spangly shallow personas of these aliens from 42nd Street and the doggedly mainstream denizens of Main Street.

With the show’s delightfully cutting send up of celebrity, its scores of easily recognizable references for theater nerds, its earnest defense of different sexual identities and its underlying affection for “everyday Americans,” The Prom is as Blue State a musical as could be designed.

The tuneful score by Matthew Sklar (Elf and The Wedding Singer) and Chad Beguelin (Elf and Aladdin) is intentionally bipolar with the Broadway bunch belting big production numbers and the Hoosiers singing in a more contemporary pop vein. No matter what faults someone might carp about during the show, they are washed away with the triumphant finale “Time to Dance.”

Every moment is played to the hilt – verbally, visually and with intentionally classic timing – by the Broadway contingent: Beth Leavel (another Drowsy alumni gigging her own on-stage persona) as the ultimate old school diva, the always prancing Brooks Ashmanskas whose real decades on the stage equip him with every trick in the backstage trunk, Christopher Sieber (Shrek and Spamalot among many others) as a leading man who is always “on” even though he is working as a waiter when we first see him, and Angie Schworer as the gorgeous, sexy and still amazingly little dancer although her character and the actress are older than we first realize.

On the other end of the spectrum, Caitlin Kinnunen makes Emma an engaging heroine who is less a rebel as much as simply wanting to be with the girl she loves.  Her heartfelt “Dance With You” is a warm declaration of love for her closeted partner. Isabelle McCalla makes Emma’s love perfectly plausible as Alyssa who initially caves to societal pressure rather than come out.

Every major character gets a “Who I Am” solo including Leavel’s Dee Dee Allen with the 11 o’clock “The Lady’s Improving” and Schworer’s Angie rolling all over Emma’s bed with her “antelope legs” in a tribute to Bob Fosse in “Zazz.” The latter is designed as a purely entertaining, completely useless, non-narrative number which revels in those very aspects – a kind of dig at mainstream Broadway.

But the show has two other major assets. The script is wickedly funny yet compassionate thanks to Beguelin and the incomparable Bob Martin (The Drowsy Chaperone and Slings and Arrows).

Early on, someone cites a New York Times review that characterized them all as “aging narcissists.”

BARRY: Well, we have to show the world that we’re not that.
DEE DEE: What, aging?
BARRY: No, narcissists! People who are in love with themselves.
DEE DEE: I still don’t understand what’s wrong with that.
BARRY: Wait a minute. I know how we can still love ourselves, but appear to be decent human beings. We’ll become celebrity activists!
TRENT: Yes! That avoids the Times completely!

The second strength is director-choreographer Casey Nicholaw whose slightly off-kilter sense of humor and whose inventive choreography are a reliable constant that can be seen in every show he touches from Spamalot to Mean Girls to The Book of Mormon.

Disney/Aesop morals aside, The Prom is primarily meant to be sparkling fun, and in that it succeeds. If this goes on the road, it will take some seriously first-rate casting to find folks the equal of Leavel and Ashmankas and Siebert, but it will well worth taking a chance on.

To see a promotional video,

This entry was posted in Performances, Reviews and tagged The Prom. Bookmark the permalink.