Report From New York: You’ve Never Seen Oklahoma! Like This 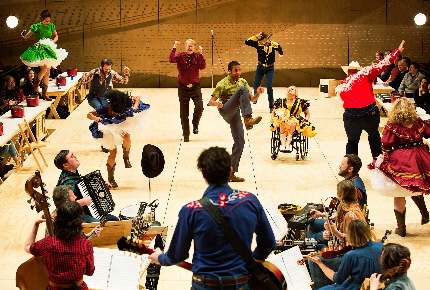 The farmer and the cowman try to be friends in the new revival of Oklahoma! at the Circle In the Square / Photos by Little Fang Photo

If you just keep tangentially current with New York theater news or even just watch the Tony Awards once a year, by now you know the revival of Oklahoma! is (and I’m guessing 20 others critics have used this phrase) “not your grandma’s  Oklahoma!”

Sitting in Circle In The Square’s deep-thrust proscenium-less theater, it’s inescapable that director Daniel Fish and his team have gone way, way out of their way to let you know that fact, even before the show starts, and then aggressively toss paradigm-shifting trope-trashing curve balls at the audience.

That approach has divided audiences as radically as the current political climate. Yet, this critic will contend that other than the wrong-headed penultimate scene between Jud and Curly, the creative team has simply transmuted the work through its unique vision without harming the underlying material – arguably even enhancing elements. Theater artists do it weekly to Hamlet.

Granted, you have to keep your mind way, way open as Fish and Company declare their sovereignty over and over. Just a few of the many fillips: the sunlight bright auditorium and stage lights remain on through most of the show, but there is one scene played in total darkness; Curly and Laurey are an inter-racial couple; the cast has only 12 performers and all have speaking parts; Ado Annie is played by an ebullient actress in a wheelchair; Jud is a decidedly complex, psychologically-driven loner-outsider; the scenery is mostly folding tables and chairs with props like a Coleman cooler; the band is located in the center of the brightly-lit stage and clearly having a great time; chili in crockpots and cornbread is prepared onstage throughout the first act and served to the audience at intermission. And we haven’t mentioned the score. In other words, traditionalists may be appalled.

But the rewards are considerable: this production has a freshness, a vitality and conveys a spirit of aspiration in a promising land of opportunity that was at the spine of the time being depicted – a welcome exemplar of optimism for our troubled times. The production’s conscious nose-tweaking does push it occasionally into a borderline cartoon mode, but the cast’s emotion-driven rendition of the lyrics invests it with a more human vibe than most traditional reissues.

Even more crucial among its virtues is the sense of community it infuses into everything, a spirit that encompasses the characters building a new state, the ensemble of actors and musicians presenting this work while watching from the low barrier surrounding the set, and, above all, an enveloping communion with the audience. The lights remaining on in the deep three-quarters thrust means the audience can see their fellow patrons the entire time. The thrust itself puts the unfolding story inside that community of watchers. The bantering actors often speak directly to the audience because they/we are fellow ranchers and farmers.

The script is intact and this outing highlights darker colors you may well have forgotten or have been glossed over in sanitized productions.

Another major asset is the totally valid orchestration and rich multi-layered arrangements brilliantly reimagined by Daniel Kluger for a country-western band including a pedal steel guitar, fiddle and banjo. It does not violate the spirit of the score, but simply reinterprets it.

The quality of the Drew Levy’s sound is miraculous. The pristine audio seemed completely natural for 95 percent of the evening and the controlled balance of voice and the band was astounding. If we had not spotted one microphone over the ear of one actor, we would have sworn there was no amplification or balance at all.

Rodgers and Hammerstein, themselves tradition smashers (how dare they not open with chorines in a production number?), would likely suck in their breath for a few minutes and then drop their preconceptions and expectations and just let it wash over them (again, other than that one misbegotten scene). It should be noted that the Rodgers & Hammerstein licensing organization not only approved of the vision, but worked with the creative staff as they evolved this production first on a festival on college campus and then in Brooklyn.

Indeed, other than imported Brit revivals like Richard Eyre’s Carousel, mainstream Broadway audiences have been uncomfortable at best with even the most modest re-imaginings of classic musicals, something they do not balk at with revisitations of straight plays.

The success of this Oklahoma! (meaning general audiences have not only attended but spread positive word of mouth) may indicate that mainstream audiences are open and even hungry for new visions of warhorse — especially younger audiences (meaning people under 70).

There are missteps. Even within its own parameters, the drive to distance itself from traditional productions can get in its way. Choreographer John Heginbotham deigned to quote a few random steps from Agnes de Mille’s original Laurey’s dream ballet and maybe some from Rodeo. But basically he created a lengthy self-indulgent Alvin Ailey-style piece mid-show that has no discernable narrative nor even a stylistic connection to this specific production of Oklahoma!

But the one serious mistake as far as keeping the intent of the piece comes near the end when, in all other versions, Jud pulls a knife on Curly, they struggle and Jud is fatally stabbed. In this one, the defeated-in-love Jud hands a gun to Curly, silently seeking an assisted suicide, and Curly complies. The creative folks wanted a darker, more psychological, less fairy tale ending – in which case they should have chosen a different piece to stage.

The winner of the Best Revival Tony is slated to close January 19 and while recent ticket sales have been respectable, they have not been overwhelming. So go while you can because while this will tour, much of the charm will be lost in proscenium venues.

This entry was posted in Performances, Reviews and tagged Daniel Fish, Oklahoma!. Bookmark the permalink.