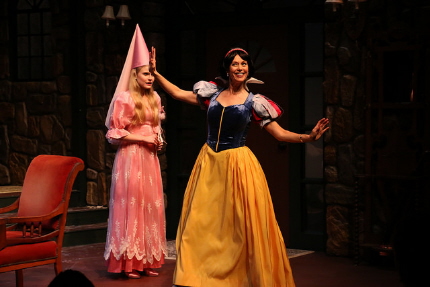 VERO BEACH — You’ll laugh wildly at the pumped up, absurd comic antics in Riverside Theatre’s brilliant production of Christopher Durang’s award-winning Vanya and Sonia and Masha and Spike. But then, it’ll sneak up, shake you out of your comedy-induced coma and warm you with the positive notion that life is all about hope.

Indeed, while Mr. Durang is known for a bent toward bizarre, anxiety-filled comedies shown in earlier 1980s works such as Laughing Wild, Sister Mary Ignatius Explains It All for You, Actors Nightmare and Beyond Therapy, something resonating and important rumbles beneath the surface.

The winner of the 2013 Tony Award, Drama Desk Award and the New York Drama Critics Award for best play, Vanya and Sonia… was all the rage on Broadway and became an ultra-hot ticket. Since then, it’s become one of the most often produced play in theaters around the country. In it, aging siblings Sonia and Vanya live in their childhood home — a beautiful old farmhouse home in genteel Bucks County, Pennsylvania. Their morning has begun with a sense of foreboding, as Vanya peers towards the audience; the lights pulsate up, each bump met by a more puzzled look on Vanya’s face. Vanya’s adopted sister, Sonia, sighs that she fears she has missed life but takes joy in the nearby cherry trees.

“I hope you’re not going to make Chekhov references,” Vanya says. But, alas, it is too late. That deed is done repeatedly in this smart play with enough classical and pop culture references to satisfy both a Dartmouth English professor and People magazine.

Soon, Sonia ruins the peace by throwing a cup of coffee against the staircase, sending shards and coffee flying. In walks the housekeeper, Cassandra, who, like her mythological namesake, has the power of prophecy and the curse that people won’t believe her. For sure, soon after she gives her warning of the day, in walks a third sibling, a histrionic actress named Masha. Accompanying her are Spike, a muscle pumping boy toy, and a Chekhov-inspired offstage character “Hootie Pie.” And just in case you don’t get the extended reference — Masha does not want go to Moscow; Nina, a sixth character, decides to call Vanya “Uncle,” and the family faces the threat of losing their home.

In the first act, director James Brennan takes these exploding forces and holds them in his grip with just enough tension to maintain focus but loose enough to allow his brilliant cast to fly with broad physical humor. In the second act, the grip tightens a bit, bringing their orbits closer and eventually into a resonating, warm understanding that while a family may comprise vastly different characters they can still remain a family. We find ourselves cheering on each character, enjoying the hope they discover and the love they dust off.

Accelerating this theme is a cast of professional actors who handle not only the absurd humor but also the deeper humanity in each of their characters, resulting in exquisite characters who move the audience.

Warren Kelly disappears into the role of Vanya, a gay man who lives with his sister. And, like Sonia, he never did anything with his life except take care of their parents. It’s such a treat to watch this actor work. As he did in his winning role of Atticus in Orlando Shakes’ production of To Kill a Mockingbird, Mr. Kelly weaves a well-rounded, grace-filled portrayal of Vanya. You feel his pain when Spike subtly teases him and how he identifies with, of all people, Tommy Kirk from the old Mickey Mouse Club. He keeps you in his grasp in the play’s wonderful, inflated lament over the passing of “shared memories” in more innocent times.

You will never hear the word “nominated” again without thinking of Susan Cella’s hysterical Sonia, dressed in a long silver sequined costume and impersonating Dame Maggie Smith accepting the Oscar for her role in California Suite. Although Ms. Cella makes you laugh from the get-go, she’ll also tug at your heart in a most lovely telephone scene. You find yourself crossing your fingers, hoping the complex character makes the right decision.

Stacey Logan is an ideal Masha, a woman who is at once Hollywood and human. Masha has contrived a visit so that she’ll have an appropriate entourage when she arrives at a costume party dressed as Disney’s Snow White (wonderful costumes by Kurt Alger). She’s also decided to sell the family home. She loads on the actor’s panache, complete with grand gestures and affected voice. Just when you think she’s headed into the Wicked Witch of the West territory, she pulls back and becomes utterly understandable and we still love her. Now that’s acting, directing and play writing.

As it is with Masha, it would be so easy to dislike Spike, the muscle-brained actor who just missed being cast in Entourage 2. But actor Brian Ogilvie, who was so wonderful earlier this season in Riverside’s Swinging on a Star, brings distinct fun and heart to the role. In a state of perpetual undress, Spike is the young flirt who loves older women as well as older men, perhaps. Played by Morgan MacInnes, the aspiring actress Nina is as warm as sunshine and endearing to all.

The stage is barely large enough to contain the energy and comic antics served up by Kathel Carlson in her role of Cassandra. She embroiders every line, every action, every reaction with character. Just imagine Melissa McCarthy (the movie Bridesmaids) on steroids and you get the idea.

Of course, in order to “live up” to the fine direction and high-octane performances, scenic and lighting designer Richard Crowell goes full-throttle on his impeccable design of the Bucks County home. In fact, the scenic design is big and gorgeous enough to be on Riverside’s mainstage.

So, no…this is no typical second stage production. This show definitely “thinks” outside of the black box. It has comic antics and a heart, over wrought characters and real people, despair and hope…Chekhov and not Chekhov. It’s definitely a must-see, but it runs only two weeks, so hop to.

This entry was posted in Performances, Reviews and tagged Christopher Durang, Riverside Theatre, Vanya and Sonia and Masha and Spike. Bookmark the permalink.