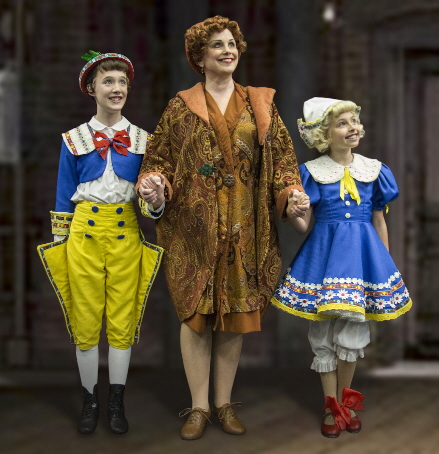 Riverside Theatre gathers its significant resources and sure-footed confidence to mount one of the greatest American musicals ever, Gypsy. Indeed, this is a big, brawny show steeped in legend; and Riverside has the muscle to produce it.

At nearly three hours in length (that includes intermission), the show will send you home with almost everything you expect in this mountain of a musical: Show girls, terrific songs, great tap dancing, lady-like striptease and a stage mother’s big number.

Based on the memoirs of the legendary Gypsy Rose Lee, the 1959 musical has a book by Arthur Laurents, music by Jule Styne and lyrics by Stephen Sondheim. It is based on the burlesque star’s memoirs.

Years pass, June elopes and leaves the act, but still Mama Rose is determined to remain in show business. She turns her eye to Louise, her neglected daughter who had been constantly told “You’re no June.” As vaudeville gasps its final breaths and with her family broke, Louise turns to burlesque, becoming the legendary Gypsy Rose Lee.

The long show has long musical numbers, here led by conductor/music director Ann Shuttlesworth. They include the iconic “Everything’s Coming Up Roses,” “Let Me Entertain You” and the signature “Rose’s Turn.”

It’s often toe-tapping, frequently funny and always irritating. Who really wants to spend three hours with an insufferable, overbearing stage mother? Well, most fans of the American musical theater. The show, written as a star vehicle for Ethel Merman, has a rich history of attracting living legends to wrestle with the role of Mama Rose to give her gutsy voice and strong soul.
Although in 1959 it was passed over for awards, it ran for nearly two years on Broadway. This giant role has attracted big names to star in four Broadway revivals – Angela Lansbury (1974), Tyne Daly (1989), Bernadette Peters (2003) and Patti LuPone (2008). The much ballyhooed 2015 West End production is scheduled to transplant to Broadway later this year. That one will star Imelda Staunton, who was Dolores Umbridge in the 2007 movie Harry Potter and the Order of the Phoenix. In addition, Rosalind Russell portrayed her in a 1962 film and Bette Midler took on the role for a television adaptation in 1993.

After a long expository beginning which seems relentless in its pursuit to reveal the seamy underbelly of show biz, the show sparks to life with the “Dainty June and Her Farmboys.” Here, finally, director James Brennan gets to show off some of his high-spirited choreography. That is soon followed by “All I Need Is the Girl,” in which Tulsa (handsome and talented Christian Probst) performs a superb song and dance number.

Those who know the show will rightfully expect it to be nearly stolen in the second act by three well-seasoned strippers – Mazeppa (Mary Callanan), Electra (Pam Bradley) and Tessie Tura (Susan Cella) – who perform the hysterical number “Ya Gotta Get a Gimmick,” complete with bumps, grinds and a trumpet.

Ultimately, though, Riverside’s well-oiled production gets in its own way with the demands of the episodic story. The deeper emotional moments don’t come to life as vividly as they could. Instead of seeing the human need driving Mama Rose, we see her only as a self-serving, impossible stage mother. Herbie barely shows any hurt when he breaks up with her. And despite years of emotional abuse and the type of treatment that would today alert child services workers, a grown Louise avoids the gut wrenching confrontation with her mother.

As Rose, Jacquelyn Piro Donovan brings a lot of energy and brassy swagger to her big voice. She exposes Rose’s irritating pushiness but misses that deeper chord which lays the groundwork for her dramatic melt-down in “Rose’s Turn.” What should be a heart-wrenching lament — “I was born too soon and started too late” — does not land.

Bob Walton makes a sweet Herbie and has a nice ease in song and dance. He is likable in his scenes with Rose and the grown Louise. But we really want to see his angry, hurt moment when he finally finds the courage to tell Rose off. And we need that. We need him to be the audience’s voice and tell the stage mother just how awful she is.

The biggest character arc of course comes from Louise, played by the elegant and charming Austen Danielle Bohmer. Constantly put upon and verbally abused, Louise shows her sacrifice and love to the family when she agrees to do burlesque. She dons a stripper’s gown, is surprised by her own physical beauty and then walks on stage. Bohmer has some fun moments with the audience and goes through various strip tease numbers where a glove is doffed, a shoulder strap slipped off and eventually, oh la la.  Not only is she beautiful, she also has fun in this sequence.

With the myriad of depression-era, vaudeville and burlesque garb, Kurt Alger continues to show his smart flair and talent for costume design. His elegant second act gowns for Gypsy Rose Lee are gorgeous and functional. Cliff Simon’s scenic design employs a two-dimensional motif evocative of vaudeville. His best nod, though, is with the beautifully carved false proscenium arch complete with four-leaf clovers and vaudevillian style placards flanking an array of footlights. Michelle Habeck’s lighting design dazzles, especially in “Rose’s Turn.” And again, Craig Beyrooti’s sound design makes the whole thing feel acoustic, which is appropriate given the setting.

For sure, Riverside has amassed a talented crew to tell this “musical fable.” There are scenes that sparkle, some that shine and others that need some buffing. But no doubt, you’ll be entertained. Just take a nap before you go.

This entry was posted in Performances, Reviews and tagged Gypsy, Riverside Theatre. Bookmark the permalink.