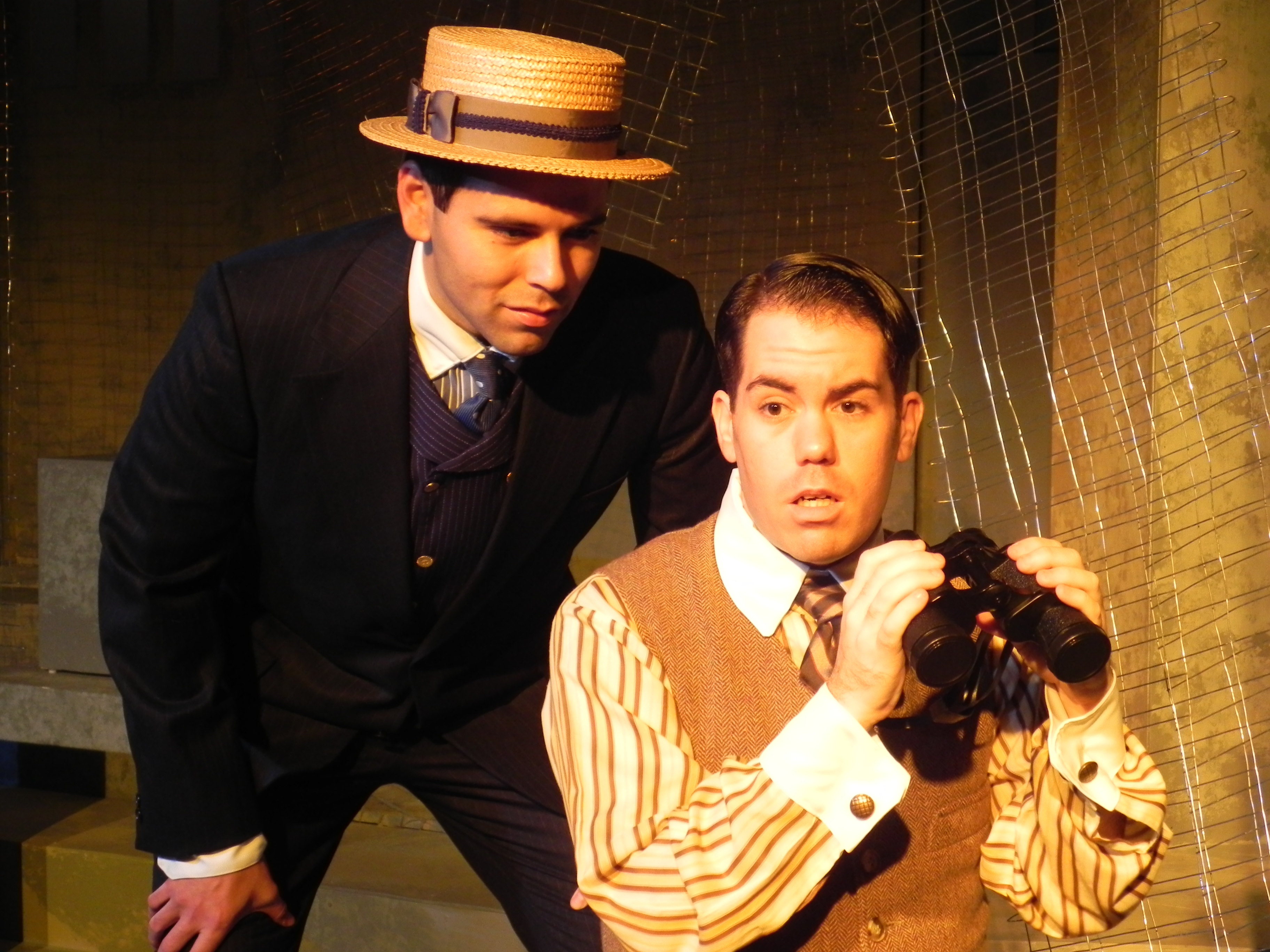 Bryan C. Ortega and Christopher Michaels as Leopold & Loeb in Thrill Me

The intimate space, a small auditorium housed in the back of Sunshine Cathedral, provides yet another layer of drama for Rising Action Theatre’s taut production of the murder musical Thrill Me: The Leopold & Loeb Story.

It’s a challenging show that examines the relationship of real-life notorious killers Nathan Leopold and Richard Loeb. The play is based on the story of two wealthy Chicago college teenagers who, in 1924, murdered 14-year-old Robert Franks. They randomly selected the boy and, after they were caught, were dubbed the “thrill killers” by the Chicago press at the time because their only motive was to commit, and get away with, the perfect crime. The fact that they were represented by Clarence Darrow is only mentioned in passing in the script, but was also part of the spectacle of the case.

Yet, in playwright Stephen Dolginoff’s world, there’s more to this killing than just cold-blooded sport. There are layers of manipulation, idol worship, lust, desire and, a dose of pure evil. And a deep, complicated relationship at its core.

While this is a two-person musical (save for parole board inquisitors, only the voices of Clelia Myers and Oscar Cheda, and radio newscaster Larry Buzzeo, miked in through speakers), it’s really Nathan Leopold’s story. Christopher Michaels as Leopold inhabits his character, giving a strong performance, both dramatically and vocally. This is the more demanding role of the two as the script calls for his character to frequently change moods ― from young, lovestruck college boy to a 53-year old prisoner facing a parole board 34 years later. Michaels handles the task with skill and the transition is never choppy. His Leopold is immature, nervous and nerdy, but also likeable. Michaels is familiar to Rising Action audiences, having appeared in productions of The Boys in the Band and Grey Gardens.

Bryan C. Ortega as the arrogant and confident Richard Loeb plays the character true to its writing as a Nietzsche-worshiping “superior being.” It is fairly one note, all bravado and swagger, and Ortega seems to relish the opportunity to play master, rattling off orders to Leopold, his servant. His haunting schoolyard song “Roadster” is finely eerie, with perfect pitch and pacing as the stranger luring his bait. The actor, who is making his debut with Rising Action after performing with the Vanderbilt Opera Company, also makes a wonderful emotional switch later in the play to scared man-child when he realizes his fate in the jailhouse song “Afraid.”

“Thrill Me” is also so much about atmosphere, which only adds to the intrigue. Brett Warsaw’s minimal set design and Eric J. Cantrell’s lighting ― stark white over Leopold’s interrogation chair, soft blues and grays throughout ― create a dream-like haze that serves to captivate and asphyxiate. It only heightens the co-dependent closeness of the characters, Leopold’s clinginess to Loeb, and Loeb’s manic pursuit of the next thrill.

Dolginoff’s repetitive, rhythmic score, has many inventive moments. The composer, who appeared in the off-Broadway production where he played Leopold, won numerous awards for the musical. He is crafty in planting devices that provide a beat since the accompaniment is only a single piano. In “A Written Contract,” the keys of an old Underwood typewriter help to keep the rhythm, and a telephone exchange between the two in “My Glasses/Just Lay Low” uses the syncopated pattern of conversation.

Andy Rogow, Rising Action’s artistic director and a Chicago native himself, knows where to place the tension, then bring things back for a slight pause until amping it up again. There could be a bit more crescendo in certain scenes, such as the title song “Thrill Me” and what could have been a more frantic “Just Lay Low.” The show, thankfully, has a five-week run so as the actors find their footing this one shortfall should build on its own.

focuses on the relationship of two men, there is a commonality that any audience, gay or straight, can identify with. Love, loneliness, the need for affection and the absolute “what if” plays universally.

“Thrill Me” isn’t an easy undertaking, but the verdict is more than clear; Rising Action Theater’s production is must-see thrilling.

This entry was posted in Performances, Reviews and tagged Andy Rogow, Rising Action Theatre, Thrill Me: The Leopold & Loeb Story. Bookmark the permalink.