Sister Act Rocks the House: Nun Musical is a Hard Habit to Break 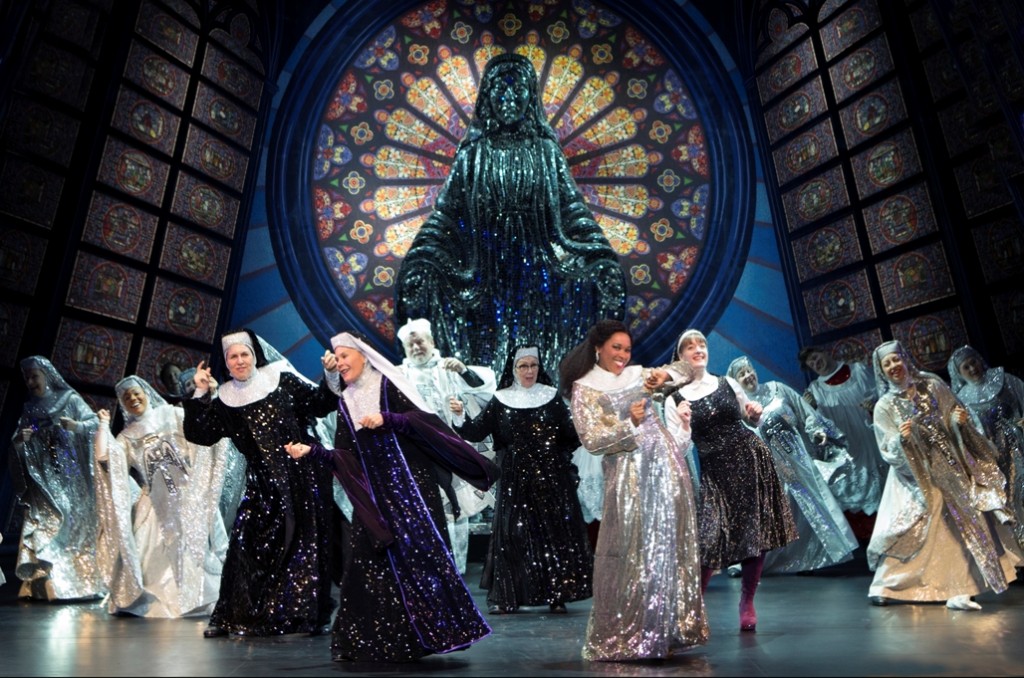 Nuns with jazz hands? An Irish monsignor who addresses his congregation in the seductive rhythms of Barry White? Traditional nuns’ habits dripping more sequins than a good night on the Vegas Strip?

There is something about nuns singing and dancing in a very un-nun-like way that never gets old.  Just look at Sister Act, part of the recent rash of screen to stage adaptations. Sister Act stays true to its cinematic roots while enhancing the story with a soulful, jubilant score and fun lyrics.

Based on the 1992 comedy starring Whoopi Goldberg, Sister Act is a story that makes sense as a musical. The show boasts a team of impressive talent:  Co-produced by Goldberg, the musical features music by Alan Menkin (The Little Mermaid, Beauty and the Beast) lyrics by Glenn Slater (Broadway’s The Little Mermaid)  book by Cheri Steinkellner and Bill Steinkellner (TV’s Cheers, The Facts of Life and Who’s the Boss?) and Douglas Carter Beane (Broadway’s The Little Dog Laughed and Xanadu).

While the musical remains true to the basic plot and the essence of the film, important changes have been made that help the crossover from screen to stage.  The setting has been moved from Las Vegas and San Francisco in the early 1990s to Philadelphia in the late 1970s. This change of time and place allows for a score that blends smooth, soulful R&B sounds with beautifully arranged old-school disco.

Sister Act is the story of Deloris Van Cartier (Ta’Rea Campbell) a nightclub singer determined to become a star. When she witnesses her mobster boyfriend kill an associate, Deloris flees to the police, who hide her in a local convent until she can testify. The Mother Superior (Hollis Resnick) disapproves of the scheme, but agrees to help, provided Deloris follows the rules of the convent and dresses and behaves like a nun, an impossible task for the outrageous Deloris. She joins the meek convent choir and takes over as musical director, helping the sisters to find their voices in song.

Campbell plays Deloris with panache, peppering her character with sass and vulnerability. She is a powerful yet approachable performer who demonstrates musical versatility with the sexy opening number “Take Me to Heaven” and later the spunky title song, “Sister Act.”  Resnick gets many of the best lines as the strict, clever Mother Superior, and her solo, “Haven’t Got a Prayer”, is a highlight of the show. Lael Van Keuren is terrific as the meek postulate Mary Robert, and her voice rattles the rafters in her show-stopping solo “The Life I Never Led”.

Kingsley Leggs is the perfect 1970s blaxploition bad guy as Curtis, Deloris’s boyfriend, and he gets perhaps the funniest song in the show, the smooth anti-love song, “When I Find My Baby.” E. Clayton Cornelious, as Eddie, the cop who’s sweet on Deloris, brings the soul in his solo “I Could Be That Guy,” which feels like an outtake from “Soul Train.”  “The Lady in the Long Black Dress” is an homage to the 1977 song “Float On” by The Floaters, and is comically performed by Curtis’s henchmen. All of these guys would make Don Cornelius proud.

The second act feels a tad lazy, with four reprises, but the audience is having too good a time to care. Sister Act is a classic fish out of water story that goes swimmingly. Deloris learns a few things from the nuns, the nuns learn from Deloris, and in the end, even the Pope gives his seal of approval.