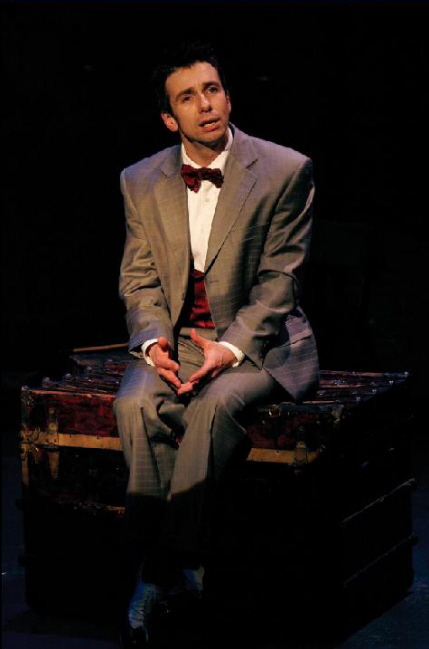 Vaudeville and vintage musical comedy may be dead but the ghost of the emperor of that era resurrects them in Broward Stage Door’s enthusiastic revival of the one-man George M. Cohan Tonight!

Jon Peterson, who has been impersonating Cohan in Chip Deffaa’s show on and off since 2006, has every vocal flourish and hand gesture of this two-act biographical revue polished to a high gloss, only outshone by his determined smile and an irresistible charisma.

It’s a matter of taste whether you’re interested in 27 songs charting a simpler time for middle class WASPs dating back to before the turn of the century and ending near the start of World War II. But you could not ask for a better guide than Peterson’s archetypal song-and-dance man. The child prodigy Cohan remade himself from a vaudeville hoofer into an endlessly hyphenated multi-tasker who contributed to the evolution of European-style operetta into story-driven if featherweight American musical comedy.

Peterson literally is a bit more breathless between numbers these days, but he still summons up more energy than an entire chorus line of 42nd Street and sends it flowing across the invisible footlights like an electrical storm surge.

From the moment that percussive attack of tap shoes breaks the silent darkness and a spot hits the ghost of Cohan peering out from under a straw boater, Peterson is running and gunning with an “and then I wrote” script by Deffaa. While much of the music was written by the indefatigable Cohan (with revisions by Deffaa), the styles represent the evolution of popular music over a half-century. “The Man Who Owned Broadway” was an early progenitor of the book musical and of using dance to advance the plot, two decades before Showboat and four decades before Oklahoma.

Of course, there are certain musts on the checklist: “You’re A Grand Old Flag,” “Over There,” “45 Minutes From Broadway,” “I’m a Yankee Doodle Dandy,” “Harrigan,” “Mary’s A Grand Old Name” and a score more you’ve likely never heard of. But while most are remembered today thanks to the 1942 film screened just before Cohan’s death, Peterson (Stage Door’s Song Man Dance Man) erases any shred of James Cagney or Joel Grey from the musical George M. His vibrant take and slightly different arrangements distance this production from those editions.

For one thing, as good as those fellas are at dancing, Peterson is in a class by himself executing his own machine gun choreography. Even when he’s not creating a blur with his ebullient footwork, his slender, bantam Cohan cannot even walk across the stage without his two-tone shoes involuntarily, unconsciously skipping a crossover step or two.

His sibilant Irish tenor voice belts out standards awash in Junes and moons, but he also mines the melancholia in the show’s penultimate introspective song about approaching mortality, “Life’s A Funny Proposition After All.”

Cohan’s warts were consciously softened in the Warner Brothers patented cheesecloth sanitization. While Deffaa doesn’t delve too deeply either, he doesn’t omit that Cohan was rarely close to many people outside of his family, that he was a philanderer, a staunch anti-unionist, an incipient alcoholic and a combative egotist (albeit having earned his bragging rights, having written 50 shows and 150 songs).

The musical direction comes from David Nagy who pounds out these tunes on an upright with a buoyant sprightliness and a topspin equal to Peterson’s.

The entire evening unabashedly embraces a time when teary sentimentality, sexless romance and unwavering flag-waving were seen as virtues. Nearly two hours of this may wear on modern sensibilities just a tad. But if you’re in the mood, Peterson and Cohan deliver a very particular brand of pure showbiz pizzazz that evaporated along with the man.