TheatreWorks Adds Another Story To The 39 Steps 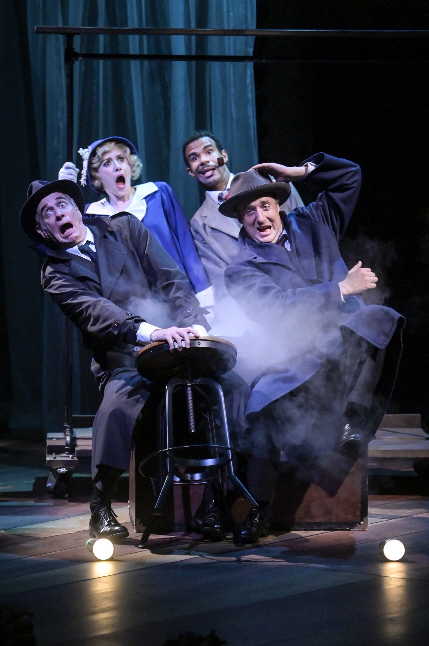 Editor’s Note: As our critics travel the country, we often see shows and companies that you might want to check into on your next trip. Here is another review from one of those journeys.

PALO ALTO, CALIFORNIA — For regular theater patrons, oft-produced plays can sometimes be a groaner to sit through, yet again. After all, you think, how many more laughs can be extracted from the same story line and same characters? However, sometimes a production squeezes out even more juice.

Martinson begins the dizzying, laugh-a-minute ride with her four actors walking through the audience then climbing up on the stage of what looks like a thoroughly darkened theater. Stage trunks, spotlights, racks of costumes and dust-catching sheets inhabit what appears to be an old-timey stage complete with footlights. A ghost light stands just off center.

One pulls a lever on an old-fashioned lighting panel and the house lights bump up. They see the audience and are amazed. Lights return to normal, the story begins and we know that we are expected to play along. We let our imaginations ride through a multitude of nonsensical notions, including trunks turning into a speeding train, a basket of petticoats becoming a herd of sheep and a kazoo turning motor scooter. Then, of course, there are the four actors who become dozens of over-the-top characters.

The play, adapted in 2005 by Patrick Barlow from John Buchanan’s 1915 novel and a previous play by Simon Corble and Nobby Dimon, makes theatrical high-camp fun of the 1935 Alfred Hitchcock film.

Set in pre-war Great Britain, the plot follows innocent man Richard Hannay, played with handsome matinee idol charm by Lance Gardner. Hannay goes to the theater and accidentally becomes embroiled in a plot concerning German spies. He escapes capture and heads to Scotland to solve a murder mystery for which he is the main suspect.

Of course, there must be a mysterious woman, a sex-starved Scottish puritan and a do-good woman who, like Hannay, becomes accidentally embroiled in a spy ring. The women are played by Annie Abrams, a splendid comic actress who, like the late Madeline Kahn, handily tackles the tricky line between sexy and strong.

Martinson uses some very slick vaudeville shtick to move her actors through the multiple scenes, allowing them to flow into one another seamlessly. Especially smart is the theater scene early in the show when Cassidy Brown and Ron Campbell let their comic timing fly with a tip of the hat and a “thank YOU” to one another. Her tight blocking in a scene where a train has briefly stopped, is inspired and deserving of the audience’s applause.

In fact, Brown and Campbell work up quite the sweat switching back and forth from oh-so-many characters, each with an astounding comic accent and energy and each scene a delicious lesson on timing.

Costume designer Cathleen Edwards ramps up action and energy with a multitude of costumes requiring quick off-stage and sometimes on-stage changes. Lighting designer Steven B. Mannshardt also adds to the fun especially in the opening ghost-light sequence and with projections on a clockface hung high above the stage.

And really, stage manager Randall K. Lum deserves some accolades as well for keeping the entire madcap action on track as it gathers steam like a runaway train.

This production of The 39 Steps is a crisp, robust beginning to a 50th season of a theater company that just won the 2019 Regional Theatre Tony Award. It is smartly directed, adroitly acted, stylishly designed and a signal that there is so much more to come. And that’s good, because we expect it.

This entry was posted in Reviews and tagged The 39 Steps, TheatreWorks Silicon Valley. Bookmark the permalink.