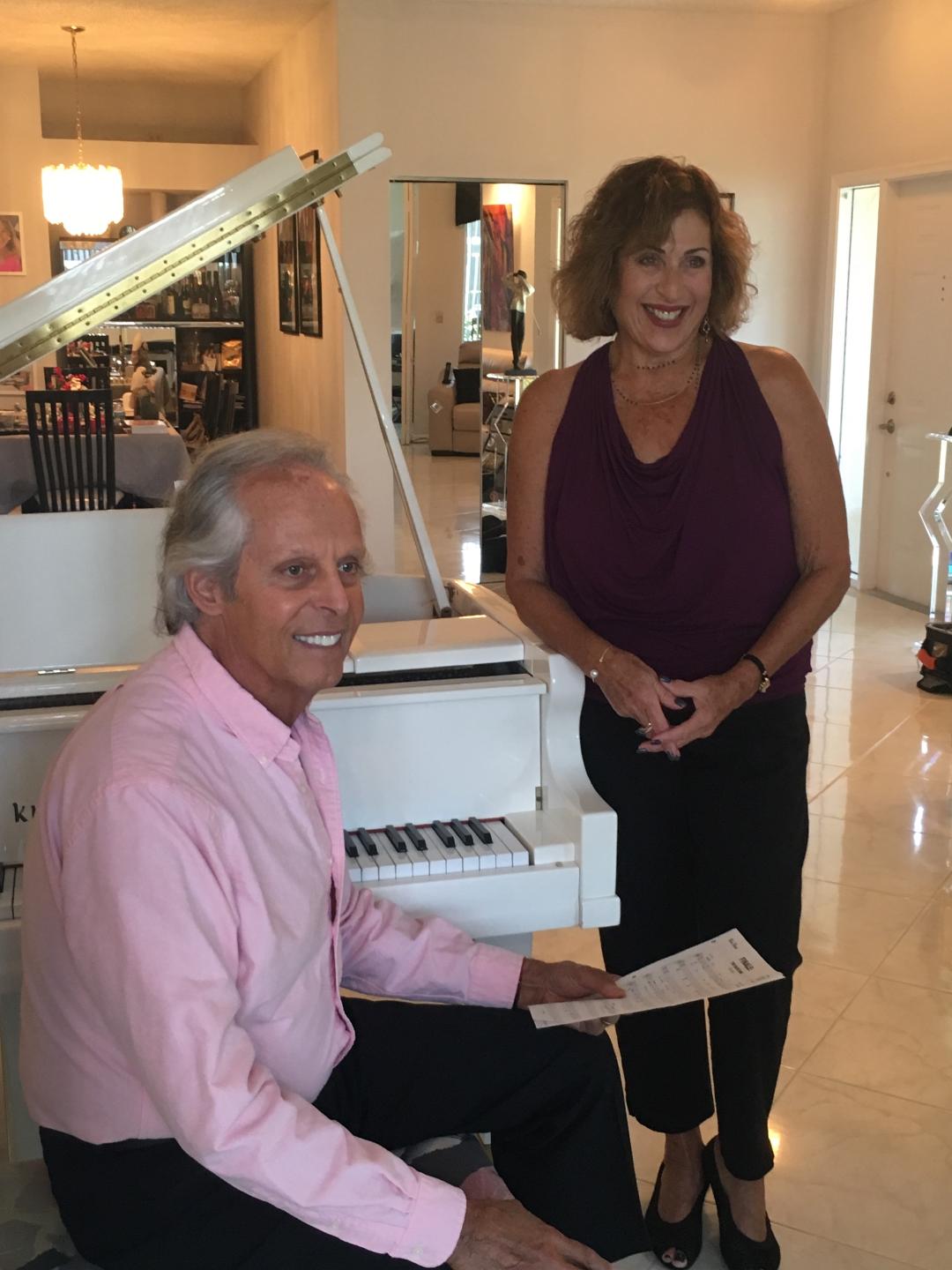 It took a crushed femur for Boca Raton resident Bonnie Logan to find her passion – writing for the stage.

Indeed, if Logan hadn’t broken the longest and thickest bone of the human skeleton, extending from the pelvis to the knee, she wouldn’t be preparing to mount her first theater piece, Boca Bound: A New Musical.

Press material summarize the musical: Nadine, a successful New York attorney. But life has a way of throwing curve-balls, and when a significant chance occurs in her well-ordered life, she must learn to adapt – and to reassess. A trip to Boca Raton, re-connections with friends and family, and the possibility of a future she had often dreamed of but never believed could happen lead Nadine on a journey of discovery – about the choices she has made and those she can still make in order to find fulfillment and happiness.

Logan said part of the show’s message is that people can repair relationships that seem permanently broken.  However, folks have to work to mend those ties.

Speaking of the seemingly irreparable, Logan said she feared she would lose her leg. But after two surgeries, her leg is 100 percent, thanks to her surgeon. “The man has golden hands,” Logan said.

Meanwhile, the senior citizen said she let her healthcare providers “do what they had to do.”

After all, she wasn’t about to let her husband of more than 30 years, Cliff, have a cripple for a wife. “He just didn’t deserve it,” Logan said.

After leaving a restaurant on June 1, 2017, she slipped in a handicapped area and her leg landed in an awkward position. X-rays confirmed the bad news. “It looked like somebody stuck a bunch of knives in her legs,” Cliff said.

In addition to the operations and hospital stays, Logan required round-the-clock help and daily therapy. She was bedridden and depressed. But her good friends, Karen and Richard Peshkin, lived nearby and came to visit. And Richard would not let his friend do nothing and feel sorry for herself.

The retired physician, whose songwriting has spanned some 60 years, suggested that while she recuperated, Logan needed some “intellectual stimulation.” With that, he told her about a couple of songs he’d written – and proposed she use them as inspiration to write a story.

She got right to work. She listened to the songs, and began “seeing” characters in her mind. Immediately, she knew she would write a piece for live theater.

Logan didn’t conduct research. Instead, she wrote from experience.  After all, she said, she’s been alive for 70 years. “I’ve seen so much,” the affable, articulate woman said.

Throughout her life, she’s been active and listened to conversations. “It goes right into the file cabinet of your brain,” she noted. “People have to talk about this.”

By “this,” she means the problems people experience throughout their relationships with their children.

Logan might raise complex issues in Boca Bound: A New Musical. However, the show’s author said she presents the material in a way that audiences can relate to. If what they see onstage hasn’t happened to them, chances are a friend or acquaintance experienced it.

Cliff offered a different description of Boca Bound. “I think this story is about the vibrancy of older people,” he said.

How many plays focus on what it’s actually like to get older, Peshkin wondered aloud. Many times, plays make elderly characters the “butt of jokes.” For instance, they’re forgetful, they frequently trip and playwrights simply portray them as humorous, he offered.  In short, playwrights, and films such as Grumpy Old Men, focus on physical infirmities, rather than also about older people’s “intellectual vibrancy,” he added. But even as we age. “our intellectual interests continue.”

Take Logan, for instance. The South Florida resident, who always wrote as part of her work operating a business, is “brilliant,” according to Peshkin. “She has a tremendous grasp of the language,” and she’s witty and articulate with a keen ear for dialogue. Further, her words possess a conversational flavor. They flow well without sounding stilted. In addition, Peshkin said her writing is colorful without resorting to cheap jokes or vulgar language.

Logan also complimented Peshkin. “I love it,” she said of his pop-infused score. “Oh my God, I totally love it. The music takes you places, it’s just beautiful. It’s from the heart.”

“That’s the best compliment you can give me, Logan,” he responded.

The people behind Boca Bound are preparing a cast album, complete with the entire script.

Peshkin said the melodies “flew off the page.” He added that the story made him realize what type of lyrics he needed to write. “Musically, I learned that writing lyrics within the framework of a story is much easier than trying to start from scratch without a particular theme,” he said.

Logan isn’t the only one who apparently thinks highly of her composer’s work. Michael J. Moritz Jr. co-produced Broadway’s recent Tony-winning best musical, Hadestown. He is serving as Boca Bound’s music supervisor/vocal arranger. He told Peshkin that the Boca Raton resident possesses talents that he (Moritz) lacks. “We’re talking about a world-class musician,” Peshkin said, adding that he “had a humility about him.”

Meanwhile, it took some humility on Logan’s part to work with the director, Chad Larabee. This theater artist, who has directed Off-Broadway and helps develop new plays and musicals, read the entire script. Then, he wrote objectives for each scene. “It gave me a plan to follow so that I never got lost,” Logan noted.

Back-and-forth discussions ensued. For example, Larabee suggested that some material belonged in a certain scene, while Logan might have disagreed. Still, she respected his advice, referring to Larabee as a “tremendous help. He was my teacher.”

In fact, “I felt like I was the only student in a grad class and he was the professor,” Logan added. Basically, the director showed her how to write for the stage, she added. Based on the director’s suggestions, she re-wrote “ad-nauseam.”

For his part, Larabee praised the team working on the show. “I immediately connected with the material and I was drawn to how Bonnie and Rich were telling this story of children and parents learning to connect as adults.

“I loved the humor and heart of the story, and I am impressed by how fearless the writers are in approaching their first musical. Bonnie and Rich’s characters celebrate how people should approach the third act of their lives. The musical celebrates the 60+ year lifestyle and reminds everyone that anything in life is possible.”

Among the many possibilities: writing your first musical at age 70 and, in the process, developing a new interest. “I’m hooked,” Logan said. “I’ve found my passion.”

This is true, even though “I was exhausted so much of the time,” Logan said. She noted that for the last two years, she lost count of how many hours the team spent on Boca Bound. Cliff said that he’d wake up in the middle of the night, only to find his wife typing in front of the computer. “You just can’t stop, “Logan said.

She added that she hopes the production at the Wick Theatre is only the beginning for Boca Bound.  While its future is obviously uncertain, Logan knows that for the world premiere, she’s expecting friends from as far away as Toronto. In addition, she’s hoping that producers will attend. Perhaps they might wish to produce Boca Bound at other theaters.

Meanwhile, Logan will continue to write for the theater. In fact, she’s planned her next show. “It’s going to be about what we’ve been through (writing and staging Boca Bound),” she said.

And her confidence is obvious. “That show “is going to be a hit,” she said.

But Boca Bound is up first. “We’re optimistic,” Richard said.

Boca Bound will run from Sept. 19-22 at The Wick Theatre, 7901 N. Federal Highway in Boca Raton. Tickets range from $50-$55 and are available by calling (561) 995-2333 or online a twww.bocaboundmusical.com or www.thewick.org. A portion of the proceeds from tickets sales will be donated to The Pap Corps, a cancer research organization.