This Show Boat Has Lovely Music But Uninspiring Acting 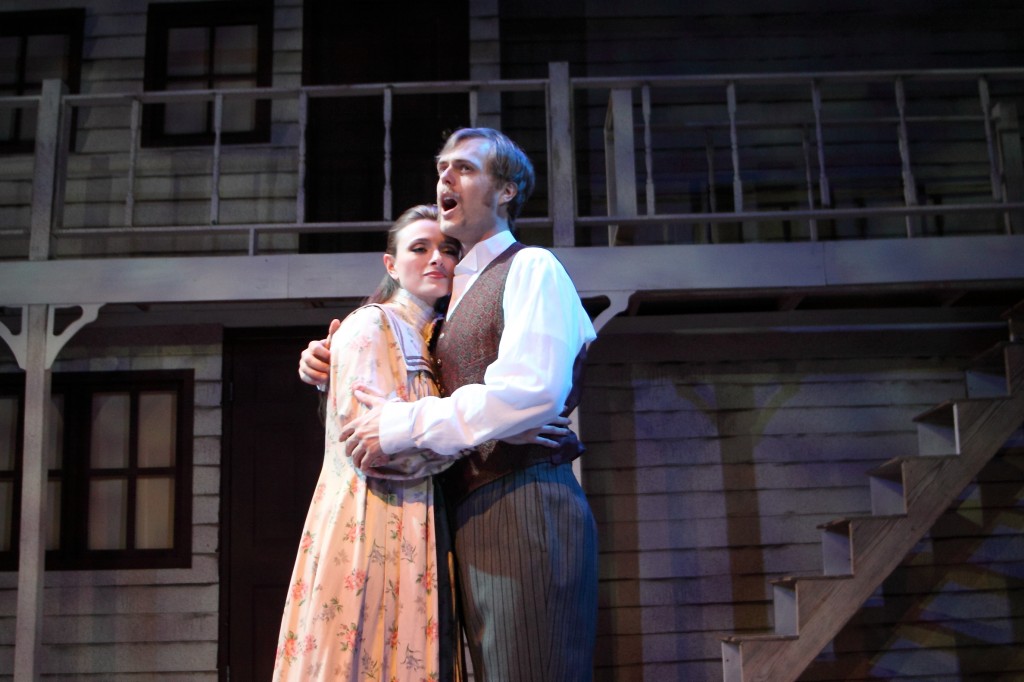 Warm, full-singing voices swiftly carry a happy audience down the Mississippi through a glorious score in Broward Stage Door’s Show Boat, but the acting and directing are so pedestrian that they rob the masterpiece of the magic it is capable of delivering.

The magic is missing because Show Boat is more than its music. Often credited as the real granddaddy of serious American musical theater 16 years before Oklahoma, the Jerome Kern-Oscar Hammerstein II tale contains a dramatic story tracking the rising and falling tides of doomed romances.

But it comes across here as shallow and presentational as the “ol’ timey mellerdrammer” that Capt. Andy’s Cotton Blossom troupe is producing on its stage. Hammerstein was too skilled a dramatist for that, alternating scenes of gaiety with tragedy until melding them in the second act. The proof is in the final scene: Even acted by a bunch of people mostly standing around, it still manages to pack an emotional wallop despite the production.  Notice how Hammerstein uses reprises of the romantic numbers from the first act and puts them in darker settings in the second act.

Drawn from Edna Ferber’s 1926 novel about three generations of entertainers on a Mississippi riverboat, the plot covers the period from Reconstruction through the Jazz Age. The genial Capt. Andy Hawkes (Richard Brundage) and his battleaxe of a wife, Parthy, (Sally Bondi) have docked at Natchez with their leading lady Julie (Sheira Feurstein), her husband and leading man Steve (Dominic Benevento), and the comedy dance team Frank and Ellie (Eric Weaver and Rose Ouelette).

The Hanks’ impressionable daughter Magnolia (Colleen Amaya) becomes smitten at first sight with ne’er-do-well gambler Gaylord Ravenal (Todd MacIntyre) strolling on the riverbank looking for a way out of town before the sheriff kicks him out.

Nola and Gay are thrown together on stage when Julie and Steve have to leave town amid charges of miscegenation – a daring plot twist from Ferber’s novel that audiences did not expect from producer Florenz Ziegfeld in 1927. But Gay’s character — or lack of it – will destroy their eventual marriage before a rue-filled reconciliation at the end.

The score produced numerous standards still being sung outside the confines of a theater including the duet “Make Believe,” “Can’t Help Lovin’ Dat  Man,” “Bill” and the iconic “Ol’ Man River.”

Kelley is an experienced stager of musical theater, but this edition of Show Boat has a disappointing run-of-the-mill feel: People just stand still and belt. The acting is never convincing no matter how good the material might be. When Julie leaves three different scenes humiliated, each time she slinks off laughably like one of the actors in the show boat’s melodramas. When the cast sings the frequent reprises of  “Ol’ Man River,” they simply line up and sing out facing the audience.

But musically, Kelley has chosen a solid crew and the dependable musical director David Nagy has done his customary top-flight job molding the cast, especially in the choral numbers.

Amaya, who appeared in Guys and Dolls and The Music Man for Stage Door, has a shimmering slivery soprano perfectly suited to the score. As with 98 percent of all actresses playing Magnolia, she’s a tad too old for the opening of the show and a tad too young to be convincing at the end of this 40-year-saga. But with her Audrey Hepburn looks and Barbara Cook voice, she admirably provides the show with a center.

Similarly, MacIntyre blesses his songs with a smooth robust voice, although we’ve never heard of a tenor doing these numbers usually performed by a baritone. He doesn’t have the charisma of a Howard Keel or Harve Presnell, but his caress of “Make Believe” and “You Are Love” are undeniably assured and lovely.

Edwin Watson, as the deckhand Joe, nails the world-weary “Ol’ Man River’ with that sonorous baritone-bass, one of the highlights of this production.

Feurstein has the vocal chops to put across affecting renditions of Julie’s “Can’t Help Lovin’ Dat Man” and “Bill,” but she invests the latter with more overwrought bathos than week’s worth of maudlin soap operas. Kelley should have reined her in.

Brundage and Bondi do a workmanlike job, especially Brundage’s manic one-man recreation of the melodrama for the audience when the actors disappear. Deidra Grace is adequate as Queenie. Ouelette and Weaver are competent dancers, doing much of the heavy lifting for Chrissi Ardito’s choreography. A special nod to Nicolette Violette Sweeney who spends most of the show as an ensemble member. But she provides the first electricity in the show in the penultimate scene when the lovers’ grown daughter Kim leads the company in Ardito’s kick butt Charleston number.

Stage Door’s producers have not scrimped on this production, starting with a cast of 25 singer/dancers including eight African-Americans.  Thanks to frequent costume changes and a few fake beards, they create twice that many characters.

Show Boat absolutely requires a full orchestral sound that few companies can afford anymore, so once again Stage Door has hired former Floridian David Cohen to create a lush flawless digitized soundtrack. As we have said before, if you have to use a synthesizer, this is the way to do it.

Similarly, Stage Door’s producers admirably ponied up for some of the most luxurious costumes seen in South Florida this season, from the heroine’s wedding gown to the elegant tailcoats for the hero. That’s because they rented them from Goodspeed Opera House in Connecticut, which in turn bought them from a Broadway revival.

Despite a week of previews and a couple of other performances, the music overpowered the heavily-miked cast in chorus numbers, but was appropriately subdued for the solos and duets.

The full house on a recent Saturday matinee indicates that Stage Door appears to have had a strong audience-pleasing season after struggling financially for a few years. Show Boat, like the much weaker My Fair Lady this season, is attracting their traditional older audience members with familiar scores; the condo crowd didn’t buy tickets to the well-executed Little Shop of Horrors, likely because they weren’t familiar with the show. Advance sales are reportedly strong for the upcoming Damn Yankees with Matthew William Chizever likely playing the Devil.

The producers are also discovering that their audience’s interest in Jewish-themed shows hasn’t been exhausted as they had thought. This season’s The Immigrant and A Shayna Maidel had to be extended to deal with the demand. While Lady Day at the Emerson Bar & Grill didn’t fare well, Stage Door has enjoyed strong ticket sales for some one-man shows like Zero Hour with Jim Brochu and Song Man Dance Man with Jon Peterson, which were so successful last year that Stage Door has just announced Brochu is coming back this summer with a new one-man musical Character Man that he premiered this fall in New York City.