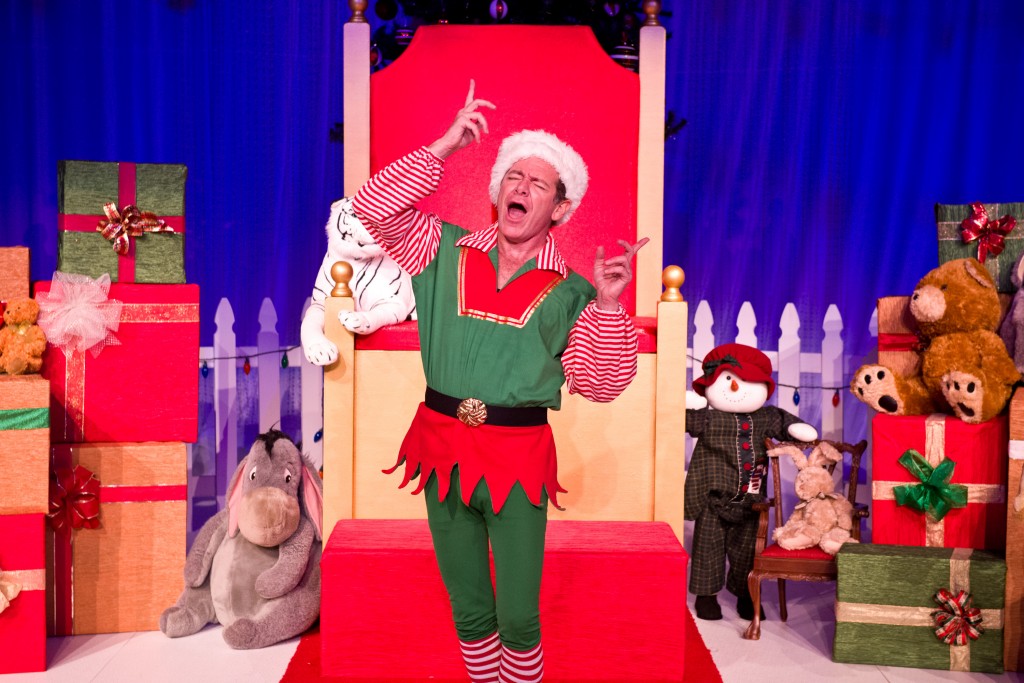 This household loves the holidays as much as the next person, but one of our favorite yuletide movies is the acerbic nose-thumbing The Ref about a burglar who regrets hiding out at gunpoint with a hysterically dysfunctional family on Christmas Eve.

This may explain why we take pleasure in a new equally subversive Christmas tradition, the annual staging somewhere of the delightfully contrarian The Santaland Diaries.

The satire about an unemployed actor forced to pay the bills by enlisting in the army of elf drones at Macy’s Santaland is being mounted this time by Parade Productions in its second season in Mizner Park in Boca Raton.

The 70-minute monologue is delivered once again by the irresistibly amiable actor/playwright/designer/bookbinder/candlemaker Michael McKeever. Even with a new director here, Kim St. Leon, this is McKeever’s third run at the material including one last winter at Zoetic Stage that McKeever helped found in Miami. As we said then, “McKeever is inspired casting, not just because of his slight stature, but because of his blend of genial charm and beleaguered helplessness at the absurdities that the temp job heaps upon his sensibilities.” If his martini-swilling elf is visibly one additional year disgusted with bureaucracy dehumanizing the joys of the holiday, McKeever hasn’t flagged and his work here may even be better than last year.

Besides the blue language, Santaland newbies be warned: This is not a hilarious laugh riot even when it is read by the author, sardonic satirist David Sedaris. It’s more of a non-stop smile punctuated with guffaws and chuckles as we recognize with rueful humor how we’ve let the humanistic, familial and religious aspects of the season slip away in the tidal wave of commerce. (Anyone remember Stan Freeberg’s Green Christmas?) The droll script is based on Sedaris’ 1992 autobiographical essay for National Public Radio and was adapted for the stage by director/actor Joe Mantello in 1996.

Our narrator David escorts us through the ridiculous interview process, the elf  bootcamp training process, and then the demeaning life on the floor of Santaland as a comely assistant (Sheri Wieseman) brings on boxing-match cards enumerating the declining days to Christmas and David’s freedom.

David, with his world-weary attitude, is not a good corporate fit to begin with, as he guides us past “the magic window” and “the vomit corner” where overfed kiddies lose their lunch waiting to see Santa. David reveals the dark underbelly to selling the holiday from dealing with spitting Santas to being hit on an indiscriminately flirting gay elf to the Caucasian parents who pointedly ask that their child visits a white Santa. Faced with co-workers who “say everything with an exclamation point,” the newly-dubbed Crumpet quips as dryly as the martini he swills for reinforcement: “I’m afraid I’m not going to be able to provide the grinding enthusiasm that Santa requires.”

But the enforced jollity saps the real thing out of the faux elves’ souls. “I spend all day lying to people, saying, ‘You look so pretty,’ and ‘Santa can’t wait to visit with you.’ ‘You’re all he talks about.’  ‘It’s just not Christmas without you.’ ‘You’re Santa’s favorite person in the entire tri-state area.’ It’s made me immune to compliments.”

McKeever holds most of the audience’s attention other than those who had too much to drink before the show and need to excuse themselves half-way through. While another actor might make Crumpet far snarkier, say David Spade,  McKeever comes across as a buddy telling you-won’t-believe-this war stories to his pals in a bar back home on a Christmas vacation in North Carolina.

If you’ve seen it before, this production isn’t radically different, although St. Leon has brought her own vibe to it. For instance, there’s more movement such as the hilarious sight of a thoroughly-disgusted David donning his embarrassing elf suit for the first time, wriggling into candy cane leg warmers and green tights with a sagging crotch to the tinkling accompaniment of  The Dance of the Sugar Plum Fairies. Even the elf costume is a hoot including a fur-edged cap that starts at David’s forehead and droops all the down to the back of his calves.

Another enhancement is the stream of sound effects and music cues interwoven by sound designer David Hart who did similar chores recreating a New York City bar for the insanely difficult show Last Call this past season at Empire Stage. Timed to the millisecond, our favorite piece of wry topspin has to be the brisk whooshing sound as a Santa with an assembly line spirit whisks each child off his lap.

And in the last few minutes, there is a redeeming anecdote about the humanistic joy of the holidays that lets us know that the entire evening is not a pre-conversion Scrooge saying “Bah, humbug!”,  but issuing a wistful sigh.

We can’t reprint it, but to read a long excerpt from Sedaris original 24-page essay from the New York Times, click here.