Two Fine Performances Put A Glow On The “Other” Sondheim Revue, Putting It Together 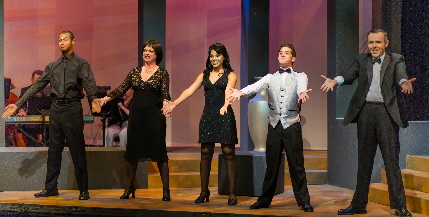 It’s been a season of Stephen Sondheim the past 10 months or so in Florida, and Putting It Together, the musical at Broward Stage Door, puts a satisfying capstone on it as strong earnest voices tackle many songs that only addicts are aware of.

Unlike those two which have no narrative, this 1993 show (revived in 1999) has a paper thin plot (although no dialogue) to which Sondheim and his frequent British leading lady Julia McKenzie inserted songs from his catalog that fit the evolving situation. In a New York penthouse, a wealthy couple whose marriage is deteriorating has invited a young recently-engaged couple to a late night black tie cocktail party. A servant comments like a Greek chorus while fissures in the relationships are stressed by infidelities before everyone makes up in the end.

While the song list contains several of Sondheim’s greatest hits, a large percentage are songs cut from final productions or added to London productions, plus songs from the film Dick Tracy. Further, the inveterate puzzle addict took a perverse pleasure in taking songs way out of context and injecting them credibly in the story being unfolded on stage. You almost can hear him giggling as he selects  “Hello, Little Girl” with the Big Bad Wolf seducing Little Red Riding Hood from Into The Woods and drops it in this effort as the older host making a play for the young visitor. Elsewhere, the song “Marry Me A Little,” a classic song of blunted ambivalence, is sung here as a heartfelt unconstrained plea.

The most stunning example is a lovely duet near the end of the first act between the young lovers, the passionate touching “Unworthy of Your Love.” Aficionados know it is pulled from the show about would-be presidential murderers, Assassins, in which the song is sung there by John Hinkley to Jodie Foster and Squeaky Fromme to Charles Manson.

Additionally, Sondheim heavily tweaked many lyrics to fit the narrative that he and McKenzie devised as well as the unifying setting of a sophisticated urbanite’s troubled journey through rocky relationships. These changes are necessary, but they demand a little bit of an adjustment for purists because Sondheim writes very specific story songs for very specific characters in very specific situations that are not terribly transferable. That’s why he has had few disconnected pop chart hits other than “Send in the Clowns.”

But the result of little known songs, altered lyrics and out-of-context placement is that an audience of musical theater fans can reappraise Sondheim with a fresh eye to appreciate the depth of his talent and skill.

The only real drawback is the whole endeavor feels like a stunt constructed to take advantage of Sondheim songs not featured in other revues. As deft and inventive as Sondheim and McKenzie are, the framework is not strong enough to hide the rickety premise.

The saving grace besides the raw material is the cast. Top of the list is Ann Marie Olson who creates a three-dimensional matron who is probably the smartest person in the room but whose life is badly fraying. She has demonstrated over and over during the past few years her ability to put superb singing chops into service with musical theater acting. Here she can be acerbically funny as she reminisces about the wedding of her first marriage, resurrecting her manic bride-to-be in “Getting Married Today” – as hilarious a rendition as we’ve ever heard it performed. In that and elsewhere, she invests phrasing and nuances all her own to give a fresh spin on songs you’ve heard scores of times from iconic performers, notably “The Ladies Who Lunch” by Elaine Stritch and “Could I Leave You” by Alexis Smith.  She’s the kind of actress who makes watching even a mediocre production (Stage Door’s Gypsy comes to mind) well worth the ticket.

Close behind is young Alexandria Lugo, the lithe and lovely breath-taking soprano, who scored so solidly in Marquee Production’s Aida and Jekyll & Hyde. It is a borderline felony that the big-budget companies here have not snatched her up. Witness her scorching sexual pursuit in “Sooner or Later” and she breaks hearts in the aformentioned “Unworthy of Your Love.” Enjoy her glowing performances now because she’s got to be headed for better things on a national scale.

Even better, savor when these two woman come together in an ineffably beautiful “Every Day A Little Death” about the pain of an unsatisfying marriage. It’s the rare confluence of two talents.

The three men in the cast are adequate, but unintentionally outshone by the women. The distinguished looking Jason Plourde, last seen in Stage Door’s Carnival and Dial M For Murder, brings a fine mature baritone to rue-filled “The Road You Didn’t Take” and duels Olson well enough in their squabbling duets. Slender Darrick Penny, who was Tom Collins in Slow Burn’s Rent, exudes a heartfelt earnestness in “Marry Me A Little” among other numbers. Young Anthony Massarotto does a respectable job with the tongue twisting “Buddy’s Blues.”

The staging by Peter J. Loewy is smooth and workmanlike, but his real accomplishment is in getting his performers to act out their numbers rather than “present” them as is done in innumerable jukebox revues. Loewy tried to make Massarotto’s “Observer” character have some utile point by having him seem a waiter hired for the night, but it doesn’t quite land. Also, if the licensing people will allow, the first few minutes of lame insider jokes that he tells could be cut with little damage.

As usual, master musical director David Nagy adroitly molds the singers who are equal to most, if not all, of Sondheim’s legendarily difficult vocal demands, notably a lovely five-part arrangement of “Being Alive.” He also flawlessly leads the live pit band of Andrea Gilbert, Julie Jacobs, Roy Fantel and Martha Spangler.

The show’s title – drawn from the song in Sunday in the Park With George – may be an ironic comment on the constructed nature of the evening, but any excuse to see and hear Lugo and Olson is worth the visit.