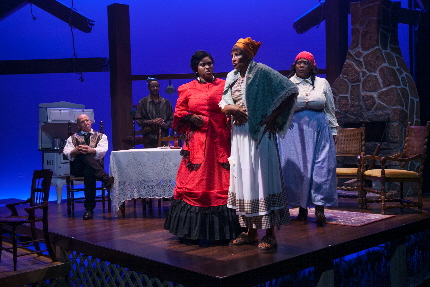 Leave it to M Ensemble to teach an audience a bit of Black history, while entertaining the masses.

In Flyin’ West, Pearl Cleage’s tale of four strong-willed women, it’s 1898 and black men and women are heading out west. Despite the 13th Amendment officially ending slavery, there’s still plenty of racism in the South.

Cleage based her play on historical fact culled from journal entries from freed Black slaves who migrated from mostly former Confederate states where Jim Crow laws legalized the concept of separate but equal.

Black Americans fled from the south to land provided by the federal government’s Homestead Act. The exodus became known as The Great Migration. Many of the homesteaders were groups of women who wanted to make their own way in the frontier.

The matriarch of Flyin’ West is 75-year-old Miss Leah (Carolyn Johnson), a former slave whose ten children were sold into slavery soon after each was born. She walked all the way to Kansas to claim her land.

“Out here,” says Miss Leah, “there’s nothing between you and your soul.”
The other three are sisters, well, sort of. Gun toting Sophie (Brandiss Seward) is at the front of the frontier. She has big plans for Nicodemus, Kansas, planning for a school, a bigger grocery store, and a blacksmith shop.

She has become the older sister to Fannie (Candice Marie Singleton) and Minnie (Rita Joe) after showing up one day at their doorstep to do laundry, while they were all living in Memphis.

“Sophie found her life out here. I never even heard her laugh in Memphis,” says Fannie.

Now Miss Leah is staking her claim on the frontier farm, but has come to live with Sophie and Fannie to avoid the harsh winter.  Sister Minnie is living in London with her husband, Frank (Seth Ian Crawford). In an effort to not give spoilers, let’s just say that Frank has his own set of circumstances, which we learn of when he and Minnie show up at Nicodemus for a visit.

Fannie, a would-be writer is hoping to get Miss Leah to tell her stories to compile in a book. Fannie has also taken a shine to neighbor Will Parish (Chat Atkins).

Cleage’s play sometimes teeters on the preachy, but director Jerry Maple Jr. has assembled such a talented cast that even the most textbook of narrative has you hanging on every word.

Where this shines the most is through Johnson’s portrayal of the strong, sassy, been-through-the ringer Miss Leah. When she recounts her harrowing stories of life on the plantation, you’ll see why Fannie wants to write the book. (Get out the Kleenex when Johnson delivers the story of how Miss Leah ended up loving the man who was forced on her to make her produce babies.)

Seward as the Annie Oakley of Nicodemus plays Sophie with a fiery will, and a rage and a defiance. She impassions her character with a steadfast commitment and embodies the very soul of Sophie. The playwright gives Sophie and Miss Leah some comical elements to work with, and the two actresses dig in deep, mining gold with each quip delivered between the two.

As the gentle Fannie, Singleton is delightful and her girlishness with suitor Will is naively light hearted. Atkins’s Will has a gosh-gee charm that is joyful. Her sister, Minnie, has plenty to work with, as the wife of the absolutely villainous Frank. At the curtain call, audiences clapped and kiddingly booed at Crawford’s portrayal, so the actor certainly played the character with the venom required for the sinister Mr. Frank Charles.

Maples’ direction has so many beautiful nuances building in transitions where the characters can be seen doing their daily chores. For instance, while the dialogue and action remain center stage, other actors are going about their daily business in low lighting; getting dressed for dinner, preparing coffee. It makes the slice of life come to life.

Mitchell Ost’s frontierland set and lighting design put the characters and the audience in a authentic element, and Shirley Richardson’s period costumes bring everything home.

Founded in 1971, M Ensemble Company is the oldest African American theater company still producing in the state of Florida. They’ve found a beautiful new home at the Sandrell Rivers Theatre at the Audrey M. Edmonson Transit Village in Liberty City.

M Ensemble staged Cleage’s play 10 years ago, but they are going back into their repertoire now that they have a permanent spsace, and re-staging works that have historical significance.

If you saw the play when they did it ten years ago, see it again; if you haven’t seen it, go, because this re-imagined Flyin’ West has wings.