Finding Neverland At The Broward Center Is Pure Magic 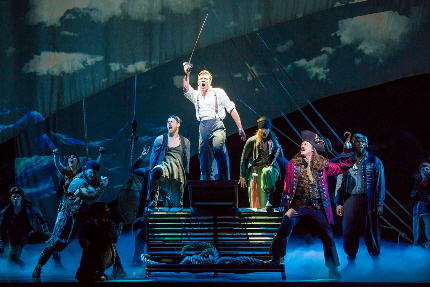 The touring cast of Finding Neverland / Photos by Jeremy Daniel

When Finding Neverland opened on Broadway in April 2015, there were many reasons to get lost in the fantasy of a writer who believes that in every adult there’s a child screaming to get out. With the current state of affairs, there’s even more reason to check out of adultville for a bit. Which is perhaps why Neverland has an across-the-board appeal that makes you wish pixie dust was sold in stores, and we could all just Swiffer a few cares away.

“Life is too absurd to be taken seriously,” J.M. Barrie says. Barrie is the author of the timeless classic Peter Pan, and in Neverland, a semi-autobiographical story, he’s the main character. The national tour of the Broadway musical is at the Broward Center For The Performing Arts for a two-week run.

It’s pre-Pan and Barrie’s got writer’s block. It’s also Edwardian England (the early 20th century, so no streaming video), where people wait with excited anticipation for the next big play to open. In this yesteryear, playwrights are treated like celebrities. One of the conflicts of Neverland is that Barrie’s got a producer banking on his next hit. Trouble is, Barrie is tired of writing formulaic scripts, and has about had it with selling his soul to make a buck.

Based on the 1998 play by Alan Knee, The Man Who Was Peter Pan, Neverland was turned into a 2004 movie that Miramax exec Harvey Weinstein produced (he gets executive producing credit for the musical, too, and rightly so. He was as obsessed with getting the musical produced as he was with getting his movie to the big screen.)

For all intents and purposes, Finding Neverland isn’t kid’s stuff.
It is family friendly, yes, but the story veers into some dark waters. Barrie is having marital troubles, which are only heightened when he meets a widow, freshly mourning the death of her husband. Her four young boys are rocked by the recent passing of their father, and, on top of that, she’s developing a bad cough. (We know where this part of the plot is heading. Can anyone say tuberculosis?) Some of this may float over kids’ heads, and there’s enough spectacle to keep everyone, no matter what age, entertained.

That’s the magic of Neverland — it surprises on so many levels. While the story is set a century ago, you wouldn’t know it by listening to the amazingly modern score. Pop writers Gary Barlow and Eliot Kennedy stay true to their musical roots, which are Billboard, not Broadway. Kennedy has had hits on No. 1 charts sung by the Spice Girls, Celine Dion, Bryan Adams, Aretha Franklin and more. Barlow is the singer-songwriter for the British pop group Take That.

The composers give their leading man his rock-star turn in at least two blow-the roof-off  songs including the Act 1 closer Stronger. Will Ray as Barrie turns on the wattage needed for every anthem.  (On the Fort Lauderdale stop, three actors rotate the lead role with Ray as Barrie through 6/16, then Noah Plomgren steps in through 6/18, and then Billy Harrigan Tighe through the end of the run, 6/25).

Christine Dwyer as Sylvia Llewelyn Davis has the powerful range to tackle the tricky vocal acrobatics in the spellbinding “All That Matters.”

The talented kid actors, including Palm Beach Gardens’ own Ben Krieger as Peter, Finn Faulconer as George, Mitchell Wray as Jack, and Jordan Cole as Michael, are charged with a doo-wop inspired number, “We’re All Made of Stars.” Fun and challenging for the kid performers, just plain fun for the audience.

While we’re on the subject of Krieger, the kid actors swap roles in different performances (pesky child labor laws), but lucky for opening nighters, we were treated to Krieger’s sensitive and older-beyond-his years portrayal of the boy who would inspire Barrie to write Peter Pan. Krieger has been performing in the national tour since October of 2016.

Splendidly gorgeous to watch, the creativity of the staging is reason enough to embrace Neverland. On a deeper level, though, there’s something profoundly moving about this drama that’s imagined in a different time and place, yet somehow seeps into modern reality. Perhaps there is such a thing as pixie dust.

Finding Neverland runs through June 25 at the Broward Center for the Performing Arts, 201 SW Fifth Avenue, Fort Lauderdale. Performances are 8 p.m. Tuesdays through Saturdays. Matinees at 2 p.m. on Saturdays and 1 p.m. on Sundays. Special matinee 2 p.m. Wednesday, June 21.  Running time is 2 hours and 30 minutes with a 15 minute intermission. Tickets $35-$115. 954-462-0222 or www.browardcenter.org.

This entry was posted in Performances, Reviews and tagged Broadway Across Fort Lauderdale, Finding Neverland. Bookmark the permalink.