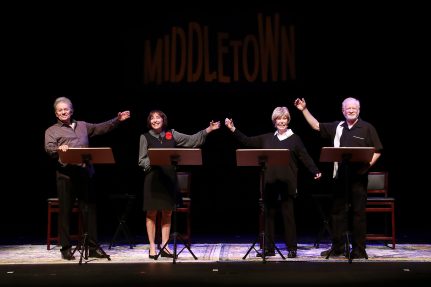 Middletown, aptly with the subtitle, The Ride of Your Life, is a charming, comfortable evening sitting around a living room with two genial middle-class couples telling you familiar stories of their lives and yours.

Intentionally told with no props, no scenery and the cast reading from scripts on music stands, the simplicity is intentional, perhaps to underscore the universality of the touchstones being discussed and to allow the audience to focus on the words.

The result of the show produced by GFour Productions and Actors Playhouse is an undemanding pleasant outing that lands because a “traditional” theater audience is essentially seeing their own story on display on the boards.

Since it touches on every phase from young adulthood through crippling aging, the older you are, the more resonance it has.

The script by Florida’s Dan Clancy is completely different than his prize-winning Holocaust drama The Timekeepers. With banter, he focuses on the small intimate facets of domestic relationships such as one partner signaling the other that “they need to change lanes” in a conversation by raising an eyebrow.

Clancy has a talent for knowing quips: “My face has more lines than a sonnet. Every time I look into the mirror I see my mother.”

All four actors are best known for roles from 40 years ago – yes, 40 years ago. They are still recognizable despite hair that has gone gray and white, wrinkles crossing their faces, peering over glasses.

But they are actors, all of them with considerable if unheralded stage experience that they have applied here with zest and skill. Other than Conn who can’t avoid her trademark baby doll voice familiar from Grease, none invoke any of the tropes they are best known for. There is no trace of Hot Lips or Ralph Malph. Each effortlessly slips on these unique quirky characters like familiar loose clothes.

Three of them have done the show before and while they haven’t technically memorized their lines, they usually just refer to the scripts and can smoothly interact with each other in dialogue. Swit, the newcomer, spends more time slightly bent over the music stand clearly reading, but she is an old pro and she knows when and how to stop and interact with her scene partners. And all are clearly having a ball doing this.

Each actor has solo moments to shine such as Conn’s wife agonizing over the discovery of her husband’s infidelity, Swit’s highly intelligent teacher whose mind is eroding before us, Zmed’s ill husband retelling how his family hid impending death from the doomed father.

Director Seth Greenleaf, a veteran Broadway producer, keeps the show moving smoothly and briskly. He works to keep this reading from seeming like a static reading by having actors move in different places behind the music stands, encouraging them to use hand gestures and pushing his actors to inhabit the moments of the story.

The play had a reading in March 2016 as part of Jan McArt’s New Play Reading series at Lynn University, and had its world premiere at West Boca Theatre Company at Levis JCC that December with Peter Pileski directing a cast of Peter Librach, Peter Galman and the superb duo of Angie Radosh and Barbara Bradshaw.

It was picked up in 2019 by Greenleaf and the locally-based GFour – a company invested in some of memorable Broadway plays and musicals of the past decades, but also the moving force behind the countless national tours of Menopause the Musical.

They have mounted Middletown in Las Vegas, Chicago and three other cities with rotating casts of Conn, Zmed, Most, Sally Struthers, Cindy Williams and Sandy Duncan.

Cynics wonder if these barebones productions like Love Letters – in which two people sit down and read off scripts for 90 minutes — are simply a producer’s dream for reduced expenses, ease in touring, appeal to regional theaters and the ease in hiring name artists for very short runs with minimal rehearsal. In fact, this production involved several rehearsals, subtle but effective lighting changes, actors moving around on the stage and exercising significant body language. And no one was coasting.

This is not The Price or Kinky Boots; it’s just an agreeable diversion but indisputably agreeable and diverting.

Totally off topic so you can skip over if you like: Ms. Swit was deep into a monologue in one of the most moving moments in the show Friday and sure enough, some entitled selfish jerk’s cellphone rang at least three times. Here’s the truth: There are very few venues anymore like Palm Beach Dramaworks (and sometimes at the Arsht) where ushers walking the aisles pointedly and publicly insist just before curtain that certain specific people (whose faces are illuminated by their cellphone light) turn the accursed things off. We guess they don’t want to offend the delicate sensibilities of these three or four patrons; they prefer to let the whole audience be offended when the bloody things sound off. And while we’re ranting: Silencing or muting cellphones do NOT keep them from resounding when an Amber Alert or Weather Alert arrives.

COVID Protocol: Proof of vaccination or clear test required. Masks required throughout the building, although 20 percent took them off once inside the auditorium.

Middletown plays Through Dec. 12 at Actors’ Playhouse, 280 Miracle Mile, Coral Gables. Performances are at 8 p.m. Wednesday-Saturday, 2 p.m. Sunday. Running time is 85 minutes with no intermission. (305) 444-9293 or www.actorsplayhouse.org. Talkbacks with the cast on stage immediately following the performances on Friday, November 26; Friday, December 3; and Friday, December 10.