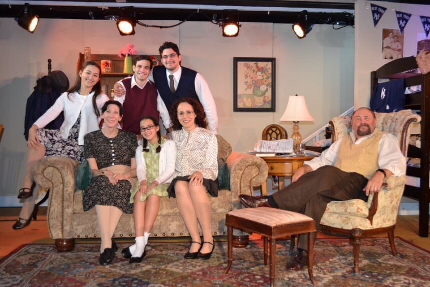 In that familiar paradigm, admirably earnest artists unreservedly invest their effort and their heart, but they just don’t have the chops to deliver better than mediocre work. For instance, lines are uttered in a straight-forward one-dimensional reading, carrying no subtext or nuance, and minimal persuasiveness that you are watching life not an artificially constructed “show.”

The first half to two-thirds of the West Boca Theatre Company’s Brighton Beach Memoirs, hampered by a misconceived central performance, falls solidly in that category of sincere, but unsubtle and unsatisfying theater, even though this is a professional production.

And then, strangely, this edition slowly starts to ramp up with increasingly affecting, occasionally moving performances that you wish had been there in the previous 90 minutes of stage time. It’s not enough to balance out what came before, but it redeems what had been uninspiring, and now ends in a heartening depiction of a family’s resilience in the face of unforgiving circumstances.

Most audience members don’t realize how difficult it is to solidly land Neil Simon’s 1982 work from the second phase of his career. Brighton marked one of the first times that Simon unabashedly and fully mixed pathos and humor, although he had subtly woven serious threads into earlier pieces like Chapter Two and The Sunshine Boys. To find that tone, or more accurately, credibly alternate those conflicting tones was and is extremely challenging for any company.

But Simon’s underappreciated script strongly evokes people who love each other and use cutting humor to cope with the sharp edges of a bleak world in which tragedies trump tragedies, challenges accumulate, complex people aren’t perfect, relationships can be strained and no one fools themselves into thinking that life is fair.

Depicting life in Brooklyn with World War II closing in, the Jerome family is battling the persisting economic woes of the Great Depression. The ebullient narrator is 15-year-old Eugene, a baseball fanatic dealing with the onset of puberty (Stephen Eisenwasser). Holding the family together is his long-suffering world-weary mother Kate (Colleen Pagano), seemingly harsh yet battling her own demons. The father in failing health, Jack (Peter Librach who gives the best performance in the show), is a worn-out garment district cutter who holds other jobs all day trying to keep their budget afloat and then at night serves as the patriarchal font of wisdom and warmth that Kate can’t afford to indulge herself to be.

Their finances are stretched to breaking by housing Kate’s half-blind sister, the prematurely widowed Blanche Morton (Leslie Zivin Kandel), and her daughters, the lovely 16-year-old Nora (Samantha Barnes) who cannot wait to leave home to become a Broadway dancer, and 13-year old Laurie (Maia Stein) who is overprotected because of a heart condition. Eugene’s older brother Stanley (Rocco Cirillo) is on the cusp of losing his dead-end job after he stood up for a colleague being abused.

Eugene, who will grow up to be Simon, acts as the audience’s tour guide, replete with a bottomless supply of classic Simon quips and punch lines begging for a rimshot. He is adolescent awkwardness incarnate with vague dreams of becoming a writer, but more interested at the moment in playing for the Yankees and seeing a girl naked.

This is a crowded environment of cauterized dreams in which intersecting lives sometimes bolster each other, other times cause serious friction threatening the unity of the group.

The more the West Boca troupe investigated this latter aspect, such as when the sisters finally air unspoken grievances dating back a quarter century, the stronger the production becomes. But for much of the show this troupe rarely gets much past single-dimension urban Jewish stereotypes, so it’s hard for the audience to invest their sympathy in the three-dimensional people that Simon created. Further, Simon, the former writer for Sid Caesar, layers on jokes and one-liners that take an expert to deliver without undercutting the drama. For instance, no matter how serious things get, Jerome interjects a witty rejoinder to spoil the moment. To be fair, the appreciative audience opening night chuckled all evening.

The trick when this show is presented effectively is the humor naturalistically comes out as a coping mechanism. But here, especially with Eugene, it’s delivered with the mechanical self-consciousness of actors on a TV sitcom.

How much of this is the actors’ fault and how much is what was molded by co-directors Alan Nash and Holly Budney is impossible to say.

Which brings us to the central performance of Eisenwasser. Whether it was his acting choices or his directors’ or both, his work for almost the entire evening resembled Arnold Horshack of Welcome Back Kotter, a 1975-79 sitcom memorable to Baby Boomers for its crudely-wrought humor exceeded only by the even broader performance of the class idiot Horshack. Virtually every line gets an over-the-top scenery-chewing hammer-and-tong Borscht Belt delivery. Maybe that’s what he was told to do. But we’ll bet Eisenwasser is better than this; our unsolicited advice is to dial it back a few notches and trust that Simon’s writing is quite funny enough not to need quite this level of early Jerry Lewis.

Indeed, the finest part of the evening is the finale (minor spoiler alert) when the family members are thrown one more trial:  relatives trapped as Hitler approaches have managed to get out of Poland and are headed to New York. To absorb them physically and economically into this already triple-strapped household would be a nightmare. And yet, every actor bonds to make an absolutely credible and deeply moving moment as the family instantly coalesces and mobilizes because it is an article of faith, the very essence of who these people are, that a family must, can and will accept this challenge.