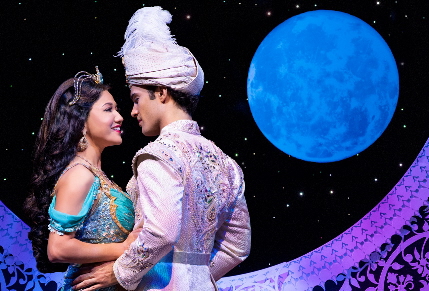 Say what you will about the Disneyization of Broadway. It’s brought a whole new world of theater to a new generation of audiences who, hopefully, will be theatergoers for a lifetime, expanding their repertoire to more serious musicals, biting comedies and serious dramas. You can do a lot worse if your first theatrical event is The Lion King, which set the Disney bar pretty high for its melding of story, characters with puppets no less and stagecraft.

Put the highly entertaining Aladdin, now at the Broward Center through Jan. 19, in that same category. Young audience members will find much to like in this production from the spirited athletic choreography—often with swords—to the appealing characters and professional theatrics.

Based on Disney’s 1992 animated film, Aladdin follows that age-old formula of boy meets girl, boy gets girl, boy loses girl, boy and girl get back together with a guaranteed happy ending.

OK, Death of a Salesman it isn’t. But not all theater has to be thought provoking. Sometimes sheer entertainment is enough.

Plus, Aladdin has a genie and a magic carpet.

The musical kicks into high gear with Genie (Korie Lee Blossey) leading the rousing opener “Arabian Nights.” Blossey’s big, bold and genial personality sets the tone. Genie is naturally the showiest role and Blossey delivers with a performance that skirts the edge of being over the top but never goes too far. Aladdin gets a little better each time Blossey is on stage. That Genie doesn’t reappear for about another 40 minutes into the first act with the Oscar-nominated song “Friend Like Me” makes Blossey’s comeback all the more welcome.

Then we meet Aladdin (a charming and buff Jonah Ho’Okano), a poor “street rat” who scrapes by with petty thefts along with his three equally poverty-stricken friends while evading the ever-present sword-wielding lawmen. This band of buddies—Babkak (Zach Bencal), Omar (Ben Chavez) and Kassim (Colt Prattes)—get by on their charm, dancing skills and puns. These three may be Aladdin’s sidekicks but they each shine in their scenes.

Meanwhile, over at the palace, independent Princess Jasmine (the equally charming Kaenaonalani Kekoa) keeps turning down princes who come a’courtin’. She wants to marry for love but her traditional by-the-rules father Sultan (Jerald Vincent) doesn’t care if she loves her husband. He insists she marry a royal who will eventually become the country’s ruler; also, she’s a woman so she must be married. Sultan’s adviser, the evil Jafar (Jonathan Weir), has his own plan to take over the country.

Jasmine escapes from the palace one day to mingle with the common people in the market. She and Aladdin meet and it’s instant kismet. But Aladdin is arrested just as the couple is falling for each other. Ho’Okano and Kekoa are adorable and their chemistry works.

With a bit of sorcery, Jafar discovers that Aladdin is “the diamond in the rough” who might, unknowingly, assist his dastardly plan. Aladdin is dispatched to the jewel- and gold-filled Cave of Wonders to find the magic lamp. But Aladdin is warned not to touch anything but the lamp.

Of course, that doesn’t quiet work out. The impetuous Aladdin grabs a jade necklace for Jasmine, causing the cave to collapse and trap him inside. He rubs the lamp and Genie appears, ready to grant him three wishes—with a couple of reservations.

Aladdin doesn’t scrimp on the spectacle with lots of glitz and the occasional artificial pyrotechnics. The Cave of Wonder s truly a wonder with its seemingly multitude of baubles bangles and beads—lots of beads—and from its moving stalagmites that seem to grow. It’s part of the magic of theater that the cave seems to go on forever, reaching beyond the walls of the Broward Center.

Then there’s that flying magic carpet that appears in the second scene of Act Two with one of the musical’s most popular songs, “A Whole New World.” Soaring high above the stage against a starry, starry night, this magic carpet truly was worth the gasps that came from the audience, and my two young companions. It’s also impressive that whatever is holding up the carpet is invisible. OK, maybe theatrical magic does exist.

And just so you don’t get bored—as if—sometimes streamers shoot into the audience. And the costumes might be skimpy, but they sure do glitter.

Aladdin is absolutely family friendly. Older audiences also will be entertained, if they allow themselves.

This entry was posted in Performances, Reviews and tagged Aladdin, Broadway Across America, Broward Center for the Performing Arts. Bookmark the permalink.