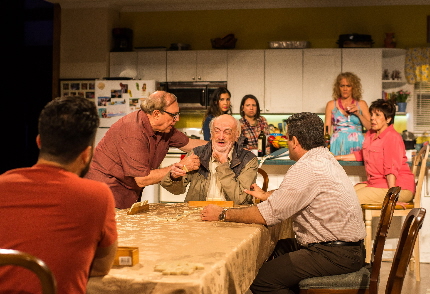 Cuban–Americans have no monopoly on prioritizing family unity while trying to preserve their culture and values against social pressure to assimilate and as their children embrace a diverse outside world.

Virtually, every group from Jews to the Irish to the Vietnamese who have arrived over the past two centuries have wrestled with the same challenges.

But Cuban-Americans, especially those in South Florida in 2020, provide a vibrant illustration of those dynamics because much of the immigrant generation is still present as parents and grandparents. They are not part of some academic antiseptic academic chapter in a history book; they are prime actors in a real life play of swelling emotions.

Thus, Michael Leon’s world premiere The Cubans at Miami New Drama delivers an almost tactile depiction of how an extended family with multiple generations who clasp and rebel during two dinner parties in a Westchester home.

In a way, this exploration of a family struggling with generational change, internal divisions and external forces is not that much different than hundreds of similar pieces written throughout the history of drama. But there are two special aspects.

One, here are everyday Cuban-Americans whose lives are rarely portrayed in mainstream theater (other than works like Sonia Flew) with their distinctive culture deftly woven into the fabric of the play, from the food being prepared to the music on the radio to the men playing dominos to familiar jokes such as guests being late because they arrive “on Cuban time.”

Second, unlike works set in white bread Anglo homes, the exile experience and the omnipresence of the Cuba itself invests every situation, every line with an extra frisson of complication and passion.

This is not a documentary but theater. So the first act is a naturalistic slice of life recreation of a cozy dinner party with three generations savoring rapid fire banter born of seemingly unshakeable bonds of blood and friendship. Then the second act ventures into a more surreal vibe with theatrically visual metaphors. Previously barely visible fissures in relationships in the first act grow into inescapable fractures as recriminations, perceived betrayals and old disputes boil over. Those bonds are stretched to breaking.

Both sections thrive under the direction of Victoria Collado, who helmed the immersive Amparo last season, as well as a cast of primarily New York-based actors who were born, worked or studied here.

The collision of generations and their clashing opinions is reflected in the characters, whom Leon wisely explores one at a time as they arrive for the party.

Christy (Ashley Alvarez) is a smart modern assimilated 30-something who has failed to succeed as an actress after moving to New York City. She has returned for the graduation of her younger brother and is sparring good naturedly with her mother Martica (Vivian Ruiz), a salt of the earth housewife who cannot understand why her daughter isn’t married and why she now wants to move to Los Angeles instead of coming home. Her affable father Jesus (James Puig) is semi-retired and putters around the backyard. The older couple has built a solid life in the United States but they still ache from being exiled from Cuba.

Later, Christy’s close cousin Ramoncito (Andhy Mendez) reveals privately to Christy that he has moved out of his combative father’s house, we deduce because he has revealed he is gay although he never says the word. Others arrive including a woman we guess is Jesus’ younger sister, the vivacious recovering alcoholic Ana (Jezebel Montero) with her new younger Anglo fish-out of water boyfriend Eric (Caleb Scott) in tow.

Finally joining the crowd are the middle-class middle-aged couple Vero (Adriana Gaviria) and a socially conservative Pepe (Rene Granado) who we have to guess are close friends of Jesus and Martica. If either is related to the rest by blood, the dialogue never makes that clear. One of the last to appear is Manolito (Ruben Rabasa), who we assumed opening night was the aging paterfamilias who escaped Castro’s Cuba and who is battling incipient dementia. But reading the script he apparently is just a family friend. (Next production, it would help if the relationships are spelled out in the playbill list of characters).

Everyone hugs everyone, mother and daughter revive an old disco dance they shared, stories are told. They sound like a musical medley of opinions and accents with people talking over and through each other. Indeed, one of Christy’s legitimate complaints is that people aren’t listening to each other, especially when they air ideas and dreams antiethical to the others.

But exemplary of the incisive core of Leon’s work are such scenes as a discussion of lifting of the travel ban to Cuba. The older generations reject it as helping the corrupt government, not the people left behind. But Jesus acknowledges the rest of the world is doing business with Cuba. So then Christy challenges, “Then what difference does it make if we stick to this?”

Jesus: Because it’s what’s right. We don’t normalize a government that abuses human rights. That oppresses the very people it should be protecting. It’s just feeding the problem.
Christy: I mean, are we expected to never go back? When was the last time you saw your sister?
Jesus: We made a choice.
Christy: Okay, but I never had a choice. I have no connection to Cuba besides the memories you’ve shared, yet I feel tied to it. Why am I being punished?

Leon provides Martica the mother with heart-rending expressions that will resonate specifically with Cuban-Americans – speeches that Ruiz delivers beautifully.

“I had my dreams too. But I had to forget that, you know. To survive. To have a second chance. We had to build this new life over the ruins of our grief. And it wasn’t easy. It wasn’t what I had planned for. But life, sometimes, can be like an ocean current. We can try to swim and swim against the current until we realize we are in the same exact place. Or we can surrender and let it take us to a new destination. And look at the life I have. I have a beautiful home with two kids, a loving husband, health and insurance….”

But the strain of facing loss is not just of a homeland, but of the traditional virtues of a nuclear family as well as other values deteriorating. She says in Leon’s more poetic verbiage:

“I’m stuck / Stuck in a cycle / saying goodbyes / finding my footing / pushing forward / forgetting the past to just have my world demolished again / I’m tired / So tired / of this endless tumble towards nowhere / I have to make it stop / I won’t / I can’t / say goodbye again.”

Leon proves he has writing skills likely gleaned from years as a New York actor who graduated from Florida International University. His dialogue sounds convincingly natural in the mouths of these actors as well as when he intentionally lets some speeches border on poetic expression in the second act. He smoothly slips in the crucial exposition into the family back and forth, an achievement some established playwrights fail to achieve.

The work and the production are not flawless. The first act establishing the culture of the household and the relationships are well-executed but actually go on just a bit too long. Some performers mumble their words. Plus, it takes a perceptive audience member to guess precisely what is occurring narratively in the last scene or so of the play, but it certainly wasn’t made at all clear.

A hallmark of Miami New Drama productions, the design elements are polished and intriguing. The living room, dining room and kitchen imagined by Christopher and Justin Swader is delightfully realistic, with some surprises we will not reveal. This literal slice of a home sits on the lip of the Colony Theatre stage with the usual full audience seating on one side, but also scores of other patrons sitting on a riser at the back of the stage. That way, the outside world of the community is visually present behind the action. The idea that this play is revealing the family like an X-ray is heightened because the Swaders’ cross-section reveals the pinkish insulation inside the walls.

Collado who has helped develop this work along with dramaturg Michael McKeever, does a marvelous job in a double-focus staging so that audiences on each side of the set don’t feel like they are missing much. This occurs primarily by having people face each other so often that much of the play has characters seen in profile.

The cast is uniformly solid inhabiting their characters’ body and soul — other than those enunciation and projection problems.

The Cubans still needs work as most world premieres do these days, but its depiction of how a family deals with 21st Century challenges is engrossing.