24-Hour Theatre Project Another Smile, Giggle And A Hoot Drenched With Sex 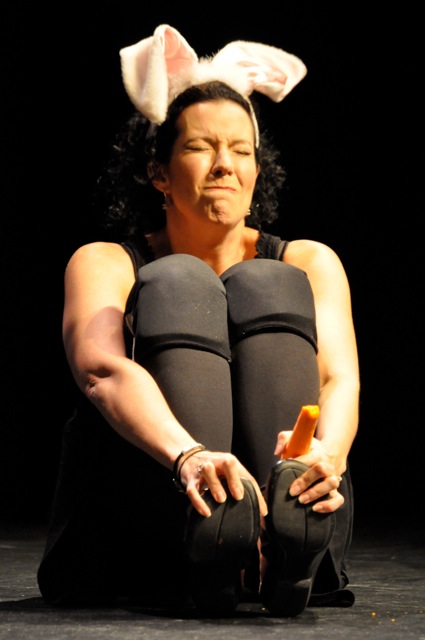 Laura Hodos as Ifeginia the Rabbit / Photo by Bachi Frost

Like a precocious pre-teen who has just discovered sex, the fifth annual 24-Hour Theatre Project was frequently raunchy, silly and drenched with carnal preoccupation.

The joyously anarchic celebration of DIY theater Monday was also the smoothest, best directed and performed, and best-attended bash yet in what has become a signature event in the South Florida theater season.

Cobalt blue themes, language and references ranged from a skit about a sex addict therapy session featuring the Virgin Mary to the welcome speech from festival coordinator Katherine Amadeo who was visibly pregnant.

As always, a killjoy could carp and criticize: One of the eight plays that did not exist 24 hours earlier was a head scratcher, another was a dud, most went on a bit long and several piddled out like a Saturday Night Live skit without a strong enough ending button.

But that would be missing the point: This is a one-night-only theatrical Animal House party among close friends and newcomers in which playwrights stay up all night with coffee and pizza to pen short plays, which are then mounted in 12 hours by a cast and crew of about 60 colleagues.

Also as always, several minor miracles emerged given the time constraints. Emblematic of the entire festival was A Martian Among Us by Christopher Demos-Brown and directed by Barbara Bradshaw. 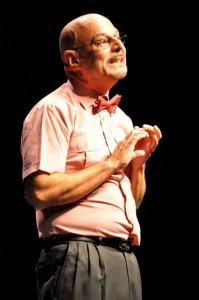 Oscar Cheda as "The Martian" / Photo by Bachi Frost

In it, a genial bow-tied nerd played by Oscar Cheda can point his finger and deliver extreme ecstasy to whatever woman or man he chooses. Michaela Cronan, Anne Chamberlain and Andrew Wind depict their resulting passion both physically and audibly. The sole problem is he can’t give pleasure to himself – until he meets “the right girl.”

Typical of the process in which playwrights instinctively grab a title and worry about the theme later, Demos-Brown connected the plot to the title by making this gent a visitor  from Mars – Mars, Pennsylvania. And his new girlfriend was from Venus – Venus, Texas.

It’s a bit silly to critique these works, but Martian was notable for its polish and crispness, not just in the writing but in the performance.

Bradshaw, best known as an actress, said she has some experience leading a cast. “This isn’t my first time at the rodeo,” she drawled before the show.

Demos-Brown, who has two world-premiere shows bowing locally this season, said the play expressed “my inner 13-year-old.” Nodding toward the slightly older director, he added, “It was downright Oedipal. I especially liked her direction when she would say something to someone like, ‘I need you to moan louder.’ ”

The 24-Hour Theatre Project is a fundraiser for The Naked Stage, a financially-strapped professional troupe performing at Barry University. This year, the proceeds will fund a joint production with The Promethean Theatre, a similarly scrappy company that does equally acclaimed work.

The all-volunteer marathon  began at 7 p.m. Sunday and ended as a party thrown by the South Florida Theater League, breaking up around 11 p.m. Monday. The show was hosted for free by the Caldwell Theatre Company in Boca Raton and partly sponsored by WLRN.

Playwrights start Sunday evening by pulling the names of directors out of a hat, then pulled headshots of actors at random and then scrambled to pull a title/theme from a list of 50 bizarre phrases.

“You gotta grab a title quickly but the truth is it doesn’t matter because by 11 p.m. you’re going to hate it anyway,” Demos-Brown said.

Then the playwrights work through the night, sometimes alone, sometimes bouncing ideas off each other, ricocheting between hilarity and hopelessness. Most playwrights neared the homestretch on their still-to-be polished drafts around 5 or 6 a.m.

Director/playwright Stuart Meltzer of Zoetic Stage said with mock bitterness that some people were faster and more prolific than others. “Some people got two or three hours sleep,” he sniffed.

David Michael Sirois (Brothers Beckett) was mentioned with disgust by several people for having penned three plays overnight. Sirois defended himself, saying they were actually increasingly raunchy version of the same work. “I wanted to give (director) Avi (Hoffman) some options. He picked the most offensive.”

The casts gather at 7 a.m. to begin rehearsals with a script that is always changing. This for year, for the first time, every single actor had their lines memorized by the time the curtain went up at 8:15.

The evening opened promisingly with a witty meta-piece, Imaginary Friends , about a playwright at a 24-hour theater festival struggling to come up with a play. Written by Tony Finstrom, directed by Dan Kelley and stage managed by Nancy Clay, it starred Laura Turnbull as the struggling writer who is mostly hampered by two muses, the mantra chanting Barbara Sloan and the roller-skating Margery Lowe (an insider’s nod to the musical Xanadu), with Tracey Barrow-Schoenblatt dropping in as the pregnant festival organizer. Turnbull’s character spent the skit fretting about the seemingly effortless output of real-life local playwright and 24-Hour veteran Michael McKeever, who made a cameo walk-on.

Holy Mary, Mother of Todd, written by Sirois, directed by Hoffman, stage managed by James Danford, was the sex addict therapy season starring Amy Miller Brennan as a hermaphrodite session leader, Deborah Sherman as a profaning Virgin Mary, Matthew William Chizever as a priest, Cliff Burgess as a sadist whose hero is Sweeney Todd and Sally Bondi as his mother who seems to be a lesbian biker.

Marvin Becomes A Man, written by Christopher De Paola, directed by Meltzer, stage managed by Sarah Zemach , was a seriously strange comic book of a piece in which Elizabeth Dimon seemed to be running an orphanage for children (Nicholas Richberg, Mcley Lafrance and Dave Corey) who are sadistically maimed.  Not a laugh riot.

Love in Stereo, written by Juan C. Sanchez, directed by Leland Patton, stage managed by Katherine Paez, starred Nan Barnett (the former Florida Stage general manager who began her career as an actress) as a whip-cracking rancher, Caldwell Artistic Director Clive Cholerton (also a former actor) as her sexually-confused partner, Jackie Rivera as their niece and Marckenson Charles as Rivera’s estranged husband trying to win her back.

In Ifigenia and the Inadequate Wand, a winsome sweet bunny played by Laura Hodos and  a hard-bitten rabbit out of Raymond Chandler played by Amy McKenna cope with a drunken magician played by Ken Clement and his assistant played by Jessica Peterson. The play written by Andie Arthur, directed by Amy London and stage managed by Sarah Siegel was a cute hoot and a giggle.

Snappy repartee was the hallmark as three sisters (Irene Adjan, Andrea Conte and Melissa Minyard) kvetched about a waitress (Mikaela Schipani) who is sleeping with Minyard’s husband in Hubris and the Rain Cloud, written by Meltzer, directed by Todd Allen Durkin and stage managed by Tom Badey. The vignette had a crispness and energy that marked several of the plays.

The last piece was a ménage a quatre done as a drawing room comedy in Love Machine, Rusted, written by McKeever, directed by Michael Leeds and stage managed by Joseph Nesmith. A conventional couple with relationship problems (Betsy Graver and Adam Simpson) get far more they expected when they invite another couple (Karen Stephens and John Felix) to their home for a sex party.

Once again, one of the best moments came at the very end when everyone connected to the show in anyway, likely more than 75 people, flowed across the stage for a curtain call — row after row of colleagues laughing and hugging and cheering themselves in a unique show of camaraderie. 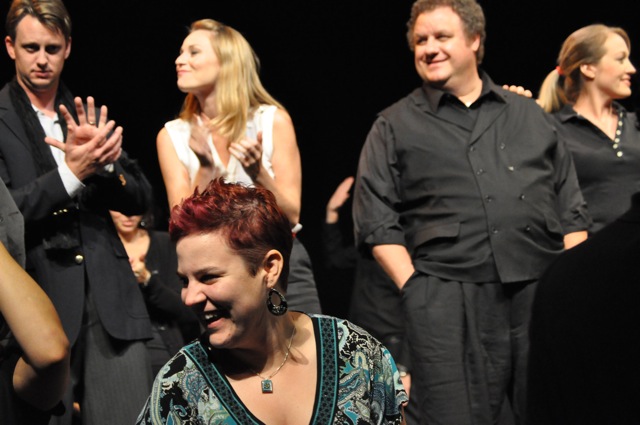 One Response to 24-Hour Theatre Project Another Smile, Giggle And A Hoot Drenched With Sex