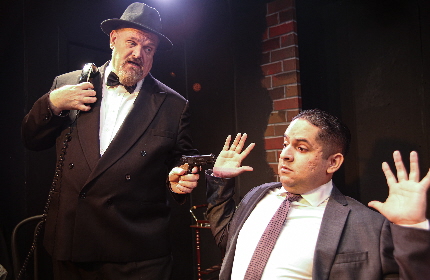 For theater folks and movie buffs, the title is a giveaway, Clemenza & Tessio Are Dead.

Those with a knowledge of theater will think of Tom Stoppard’s 1966 play Rosencrantz and Guildenstern are Dead, also Shakespeare’s duo in Hamlet, and movie fans may remember the secondary characters, Salvatore “Sal” Tessio and Peter Clemenza, capo regimes of the Don Corleone crime family from 1972’s The Godfather film.

Like the opening of The Godfather, the action on the intimate Empire Stage begins on the day of Don Corleone’s daughter’s wedding. Tessio (Christopher Dreeson) is waiting for his partner to show up outside of the church. Right off the bat, when Clemenza (Troy J. Stanley) arrives, playwright Gregg Greenberg establishes the differences of the two men, how their partnership of knowing each other and working together for 40 years defines their dynamic.

Clemenza arrives in a tuxedo, the cummerbund of the suit wrapped above his stomach. Not only does he have the accessory in the wrong place, but Tessio informs him that only members of the Corleone family are allowed to wear tuxes to the wedding. He shoulda known that. Tessio has been dealing with this guy’s bumbling for 40 years.

They are Laurel and Hardy, Oscar and Felix, and, shades of the original Rosencrantz and Guildenstern, Shakespeare’s minor characters in Hamlet. Greenberg uses this as a parallel in his plot to the pair’s loyalty to the Don, a la R&G’s devotion to prince Hamlet. We know how that ends up: R&G betray the prince, and one of the C&T duo do the same.

The minor flaw of this play, however, is the writer wears his influences on his sleeve. Some of the comedy may get lost on someone who doesn’t know The Godfather back story; the barrage of name dropping (Sonny, Fredo, Michael, Connie and Carlos, Paulie, Sollozzo, Don Barzini, Philip Tattaglia….) could get confusing. Then there are the inside jokes, the subtle references to Shakespeare’s R&G. Clemenza’s explanation of Hamlet: a prince in Denmark, “way up north in Sweden,” and Rosencrantz and Guildenstern: Two Jewish guys hired to tail Hamlet.

It’s all a bit complicated for a comedy, and one that’s barely 90 minutes.

The basic premise does work: Take two secondary characters from a classic work, that some have elevated to cult status, and follow their story, make them the major players. And then move them forward: a la the times they are a changin.‘ Think corporate takeover in this modern world, but here it is the 1940s and its gangsters who are waiting for the other shoe to drop. Corleone’s kids are running the show, and this pair is old school.

“This weddin’ isn’t about Carlo and Connie,” Clemenza says, “it’s about Sonny and his brothers tryin’ to push us into early retirement.” They need to put their heads together to solidify their place in the Corleone’s world, have job security, and not become Mafia dinosaurs. So, like all good mobsters would do, they think about who they could rub out.

Both actors in the production are strong and great fun to watch, but Dreeson as Tessio is the more sincere of the two. Greenberg has written him as a more multi-layered character and Dreeson takes full advantage of it.  Stanley falls into the trap of Clemenza as a buffoon, although not entirely his fault, as that is what the script has given him. Also, the choice of actors using a New Yawk mobster accent should be one that, if undertaken, is consistent. Dreeson maintains his, Stanley not so much. Stanley has enough of a stage presence to bring out the best of Clemenza, so the accent wouldn’t make a difference if it was dropped. It might allow him room for Clemenza to develop a bit more.

The production elements are limited – playing areas that represent the kitchen in Clemenza’s apartment, a table at the wedding, chairs that are supposed to be mattresses. Director Shari Upbin makes sure her actors move throughout the spaces with familiarity, and, in turn, the actors solidify the believability.

Upbin (who had to replace original director Jeffrey Bruce after he was unable to fulfill the commitment due to a family emergency) keeps things moving briskly, which gives the comic elements the necessary foundation. This is especially important in the second half of the play, when the comedy becomes somewhat dark, that it keeps up its pace, otherwise it could become bogged down and venture into dramedy territory.

One of the smartest and most satirical of all the devices in the play (and you don’t have to know any references to enjoy) is Greenberg’s choice of having one actor (in this case Aaron Bravo) represent multiple characters, everyone from the Don himself to Clemenza’s offstage wife. Bravo plays them all with a slick slyness that helps up the satirical ante.

The costumes by Angelina Mola are wonderfully 1940s period specific, as are the set design and props by Jade Mesa. Lighting by Vanessa McCloskey keeps everything in an appropriate palette that references sepia tone, giving it a nostalgic glow, and David Hart’s sound design adds to that ambiance.  Produced by David R. Gordon of Empire Stage, applause, applause for this theater’s willingness to present works such as Clemenza & Tessio Are Dead, billed as coming “direct from the NYC Fringe Festival,” to find a home and a new audience.

Greenberg is a New York-based writer who is a financial journalist by trade, and who was in the house at Empire Stage during the opening weekend performance. There’s much to deep dive in his script – so many layers to reveal in a short period of time, packed into a whopping 14 scenes.  That makes it original despite its borrowed overtones.

If not taken so cerebrally, a non-Don newbie will thoroughly enjoy this almost two-hander about a pair of guys who have been working the same job for years, and whose only identity comes from what they do, not who they are. That’s Clemenza & Tessio Are Dead’s solid storyline, and it doesn’t need to rely on any other works for its universal message to come through.

Clemenza might offer this advice: “Leave the references, take the cannoli.”