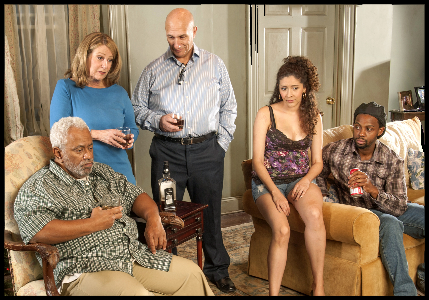 Stephen Adly Guirgis likely doesn’t believe in God, but if he did, his vision must be of Him greeting the newly-arrived in Heaven with limitless compassion for their frailties but forcing them with unflinching honesty to see their, for the lack of a better word, sins.

No matter how amiable or altruistic everyone may seem at first in his Pulitzer-winning Between Riverside and Crazy at GableStage, all of his human beings are tainted and flawed, in the most generous interpretation.

Those failings may be a by-product of social forces like racism or the rough turns that life throws at us all. But in Guirgis’ world, no one is quite who they seem and betrayals among extended family members is almost pre-ordained.

It is telling that in the play’s final scene, even the audience’s positive perception of one character takes a punch to the gut, even though he is merely carrying through on a repeatedly uttered threat we thought he would not actually carry out. Everyone in the play succumbs to something.

Obviously, we have failed to make it clear so far that like Guirgis’ The Motherf**ker With The Hat, this Riverside is also a hilarious jet black comedy shot through with copious profanity and absurdist plot twists — including the most unique administering of Communion ever depicted on stage or anywhere else.

In fact, one of director Joseph Adler’s successes here and with Motherf**ker is his skill to convincingly deliver Guirgis’ frequent gear shifts from amusing banter to acidic invective to downright violence and then back to witty rejoinders, and even a re-establishment of a recalibrated homeostasis.

We can set up the plot, but be assured that the journey has hairpin twists and upending backstory revelations as Guirgis peels away lies told to others and told to the characters themselves so that the playwright can expose the simultaneously damaged and damaging souls.

Walter “Pops” Washington is an aging but spirited retired police officer who lives in a rent-controlled apartment on the now pricey Riverside Drive in New York City. Pops, an African-American, has been out of service for eight years since he was shot while off-duty in a dicey bar by a white rookie in circumstances that emerge piece by piece with evolving clarity.

A genial patriarch recently widowed after years tending his long-ailing wife, Washington has generously welcomed back into his home his son Junior after his latest prison stretch, as well as Junior’s flighty Latina girlfriend Lulu, and even another paroled Puerto Rican drug addict Oswaldo. They form an ad hoc family in which Oswaldo and Lulu call Washington “Dad” because it seems right – and because they have never had a positive paternal figure in their lives before.

But all is far from well. Washington’s long-stalled discrimination lawsuit against the police department has reached a take-it-or-leave it offer whose refusal could endanger him remaining in the apartment and even the freedom of Junior who has not gone quite as straight as he pretends. Washington is being pressured to take the deal “for his own good” by his adoring ex-partner Det. O’Connor and her fiancé, the convivial but unapologetically ambitious paper-pushing desk-bound Lt. Caro. While all the younger members are striving in varying intensities to change their lives, there are subtle signs that their resolve is failing.  Everyone has secrets including a Brazilian immigrant sent by a local church to look after the elderly and infirm.

Thematically, Guirgis covers a lot of ground and yet makes it all seem part of a whole piece of cloth: the existence of God, the racial divide including debatable police shootings, heartless bureaucracy, the origins of physiological and psychological addiction, the difficulty admitting your failings to yourself, plus a half-dozen other targets.

But the word that keeps echoing long after the ever-questioning play ends is “family:” How do we define that word, what is our vision of what it should be, who is actually family, what kinds of relationships does it encompass, what is our responsibility to those people, how does the reality square with our idealization of it, does loyalty to these people trump the temptations and pressures of the outside world? On and on, the questions ricochet and morph in intensifying waves off a theatrical hall of mirrors.

The acting under Adler’s hand is remarkable in that the audience buys that such unusual characters who say and do bizarre things actually exist. Further, although each person might seem on paper to be inhabitants of different planets, this cast believably persuades that they are, indeed, an extended family that has bonded together. Much of this stems from the actors and Adler delivering smooth rapid bantering with the musical cadences of people who have known each other for some time.

At the center is the bravura performance of Leo Finnie as Pops. His initial scenes create a crusty but lovable salt-of-the-earth curmudgeon with a bent for snappy quips. When Junior says Lulu is studying to be an accountant, he shoots back: “She ain’t no accountant; her lips move when she reads her horoscope.” Still, he has an obvious push-pull affection for the three young people crashing in the apartment while they try to reclaim themselves.

But Finnie makes it clear in a voice that melds Cleavon Little and Robert Guillaume that his good nature is tempered by decades living in the unforgiving crucible of the punishing streets. When that affable mask begins to slip and a volcanic explosion is nigh, Finnie has laid the foundation for the audience to believe that a crippling anger has consumed and perverted his life. Physically, he shambles about as the picture of “going to seed,” with steely hair, broad shoulders, gut sagging past his pants, jutting chin, eyes that can seem impossibly tired or blaze to life when provoked, and especially a mouth that shuttles between a drooping disappointed frown or as slightly wry hint of a smile.

The rest of the cast is equally adept: welcome home Marckenson Charles as Junior trying to reconnect with his father; Gladys Ramirez, a Motherf**ker alumnae, as Lulu; Beverly Blanchette as the ex-partner who seemingly only wants the best for her friend; Michael Serratore as the classically duplicitous bureaucrat, and Sara Oliva as the immigrant who says she wants to help Washington find peace in salvation.

Last but not least, Arturo Rossi (another Motherf**ker graduate) is the voluble spider-tatted addict Oswaldo. Rossi previously has played a similar physically imposing clueless loser flailing in the netherworld of society, as much a danger to himself as anyone else. But Rossi inhabits this persona with such persuasiveness that even after one of the play’s more shocking scenes, audiences cannot help but feel some sympathy for his earnest doomed efforts to change his life.

.Lyle Baskin’s design and Clara Fath’s props create a spacious apartment gone to seed from neglect, with peeling paint and a dinge overlaying everything, much like the residents. There’s even a small Christmas tree whose top droops off-kilter.

Oddly, for all his seeming cynicism, Guirgis ends by giving all his characters hope for a second chance at reinvention, redemption and resurrection – even though he intimates at the curtain that this marks his denizens’ fourth or fifth attempt at a second chance.

Between Riverside and Crazy runs through Feb. 19 at GableStage, 1200 Anastasia Ave., Coral Gables, inside the Biltmore Hotel. Performances generally at 8 p.m. Thursday-Saturday, 2 p.m. and 7 p.m. Sunday. Runs 2 hours with one intermission. Tickets are $42-$60 and students $15. For tickets and more information, call 305-445-1119 or visit GableStage.org