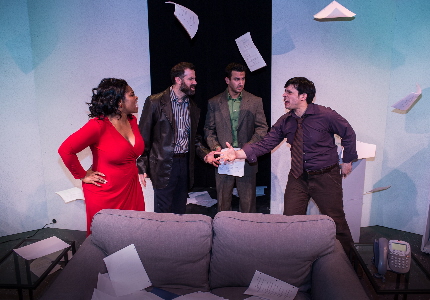 Rita Joe, Ben Sandomir, Chris Anthony Ferrer and Daniel Gil argue over the intersection of race and art in The Submission at Island City Sage / Photo by George Wenztler

As a famous denizen of one of the New York City’s outer-outer boroughs once observed, everyone’s a little bit racist. Some of us more than others.

Jeff Talbott’s 2011 award-winner The Submission, enjoying its regional premiere from Island City Stage, is predicated on this realization. It charts the ignition of a racial flashpoint in the theater world over the span of a year, as liberal creative types are forced to confront long-dormant prejudices.

Danny Larson (Daniel Gil), an emerging playwright with a few readings on his resume but nothing produced, has finally penned what he believes is his breakthrough, the kind of work that “wrote itself.” The only hitch, as he sees it, is the play’s socially conscious subject matter—ghetto life in a black housing project. Believing that potential producers would dismiss a script about black life from another striving Caucasian scribbler, he plasters an unpronounceable African name on his title page and, per the advice of his old friend Trevor (Ben Sandomir), “submits the fuck out of it.”

The play is accepted, of course—by the Humana Festival—prompting Danny to pursue the African-American avatar who will represent him during rehearsals, only to reveal the playwright’s true identity, in headline-grabbing fashion, on the show’s opening night. Emilie (Rita Joe), an actress whose career could use the publicity, accepts the bargain.

It’s a cockamamie idea that unravels accordingly. During the yearlong stint from submission to production, Danny and Emilie’s relationship sours. Danny is gay but also white-privileged, and that has given him little perspective on other Others: The more stressful the rehearsal process grows, the more he falls back on insensitive racial stereotypes to convey his frustration.

Emilie, in turn, fans the flames by dismissing the injustices Danny has faced as a gay male, and by discovering racial slights in every conversational cranny. If the white characters of The Submission—including Trevor, who has begun dating Emilie—step so often into minefields of microaggressions, it’s partly because Emilie planted the mines. The irony of the situation is rich: Danny has written an allegedly marvelous play about black life, but he’s unable to communicate to the one African-American person he knows outside the page.

Written before the emergence of Black Lives Matter, university “safe spaces” and the #OscarsSoWhite Twitterstorm, The Submission presciently anticipates all of them.

But if the wounded minorities of The Submission inexorably degenerate into the same brand of primitive tribalism that undergirds Ayad Akhtar’s Disgraced, they lack that play’s sense of tragic permanence. The DNA of The Submission, by contrast, is mostly inside-theater myopia.

It’s telling, and self-consciously cute, when Trevor, in the opening scene, applauds the “produce-ability” of Danny’s play, with its “four characters” and “one set.” The same could be said for The Submission, which takes no chances in its familiar structuralism, its brief scenes, its budget-conscious requirements of set designers. The only locations Michael McClain needed to produce were a living room and a pair of coffeehouse tables. Towering pages from a hand-written script loom behind the furniture, adding some personality and ethical weight to the otherwise perfunctory design.

The Submission isn’t, in other words, in the same ballpark as Island City’s boldest or wittiest productions. Director Michael Leeds invisibly infuses the show with the correct balance of escalating verbal savagery and stunned silences, but some noticeable fumbling on opening night marred the fluidity. The fourth cast member, Chris Anthony Ferrer as Danny’s finance-industry husband Pete, seems wooden and emotionally detached much of his time onstage, clashing with the seasoned naturalism of Sandomir and the righteous fire of Rita Joe, whose performance is the play’s most powerful. Even when Emilie is arguing a wrong position, Joe takes the scene on points.

Gil has the play’s toughest challenge, because Danny is so unlikeable. Even before his racist genie escapes its bottle, he expresses a Montessori Millennial’s entitlement to instant adoration, complaining of a tortured career of only three readings in four years. It may be possible for an actor to humanize Danny, but Gil’s embodiment fails to find the charm.

There are enough smarts in The Submission’s knowing rebuke of a post-racial America to generate plenty of discussions on the ride home. Just don’t be too surprised if you’ve engaged in them before.

The Submission runs through May 8 at Island City Stage performing at The Abyss Stage, 2304 N. Dixie Highway, Wilton Manors. 8 p.m. Thursdays through Saturdays and 5 p.m. Sundays. $35. (954) 519-2533, islandcitystage.org. Running time is one hour and 45 minutes with no intermission.