Posted on December 6, 2010 by Bill Hirschman 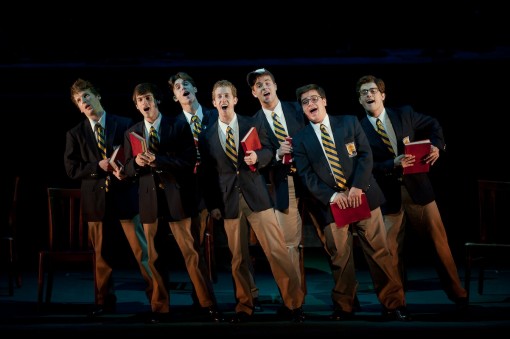 The young Floridians met in the kitchen of a Jupiter dinner theater in 1987 when they made the surprising discovery that they both loved musicals.

Today, the former waiter and food server are back in Jupiter with 23 years of theater experience and several joint musicals behind them. On Tuesday night, they’ll cap ten years of development with the world premiere of Academy, a melodic drama whose workshops already have won awards from competitions in New York City and South Korea.

Academy was conceived, developed and is directed by the waiter, Andrew Kato, now the artistic director of the Maltz Jupiter Theatre, and written by the food server, now composer/lyricist/librettist John Mercurio.

The pop chamber musical is set in the insular world of a prestigious all-male prep school in the northeast. Two seniors intrigued by the Faust legend bet whether they can tempt a freshman to break school rules to succeed. But when the transaction veers out of control, the boys fight for their own academic and personal survival.

The plot harbors interlocking themes about boys learning to be men, taking responsibility, father-son relationships, betrayal and honor in a world where venerable tradition and modern pragmatism collide.

‘They are very youthful characters who are set against a backdrop of long tradition and history, and the play becomes almost about them reconciling themselves against that backdrop,’ Kato said.”Everyone, whether you’ve gone through a private school or not has identified with that difficult time in life when you have to be an adult and do the right thing and are tempted [instead].’

Academy‘s score doesn’t sound like a classic Broadway musical. Mercurio’s classical music training and Kato’s pop music sensibilities meld to create a multi-layered sound that echoes both antiquity and today.’It’s a mesh of styles that began when the authors met working at Burt Reynolds’ Dinner Theater in 1987.

‘Back then (Kato) was listening to a CD and he said it was Chess,” recalls Mercurio. “Here was someone else interested in theater music.” They joined forces on a piece Kato had started, Switch, the first of several shows together.

It was a marriage of different sensibilities, Kato said. ‘Really great art is disparate elements coming together to create something very exciting.’

Setting a musical in a northeastern boys’ prep school is not the exorcism of a youth spent in such cloisters. Kato attended Jupiter High School and Mercurio attended The Benjamin School in Palm Beach Gardens ‘when it was much smaller.’

Kato became intrigued with the setting in 1997 when he heard a boys’ chorus performing Michael Jackson’s Thriller at an a cappella festival.

‘I was struck by the sound of them and also the camaraderie. They really seemed to enjoy themselves. Now we’re all familiar with Glee, but in 1997, I kind of went off into my own little dream about what it would be to have a musical about a prep school, knowing that that hadn’t been done before.’

Initially, Kato imagined the entire work a capella. ‘The group voices would serve as the orchestra and the storyteller. Even now, when you listen to the score, it doesn’t have a very choral sound to it. But we decided long ago that we actually had to add instruments to it.’

The duo reconceived it through numerous readings and workshops over ten years. On some readings, ‘we had (Broadway actresses) Julia Murney and Nancy Anderson in it when we had a love interest,’ an element no longer in the show.

Around 2001, a workshop was staged with Columbia University students and a 10-piece orchestra. ‘At that point, we had the idea of a gentleman’s bet, but the Faust element was not there,’ Kato said.

But the pair had always been fascinated by the juxtaposition of stories. An earlier piece grafted Sheherazade’s 1001 Nights with a story of the Underground Railroad. The resonances of the bet and the Faust tale became apparent. They even wrote the songs in a 1950s do-wop vein at one point until deciding the story had to be a contemporary tale.

The corner was turned when in 2008 when a John D. and Catherine T. MacArthur grant underwrote Academy‘s development at the Maltz’s Emerging Artist Series.

‘We pulled it off the shelf. Distance and time away from it was a big factor in looking at it fresh,’ Mercurio said.

The one-night slimmed-down 45-minute workshop in October 2008 was backed by the 20-piece Palm Beach Youth Orchestra and the Young Singers of the Palm Beaches’ mass choir. ‘It was rough around the edges; there were squeaky instruments,’ Kato said. That was a slightly different experience for the Maltz audience accustomed to highly-polished work. ‘People were awakened to the possibility of what new work means.’

The pair then submitted it for consideration in the prestigious New York Musical Theater Festival. Out of 300 entries, it was chosen to be among 12 to receive a staged workshop production in November 2009. The cast was smaller, the band was greatly reduced, the black box stage was modest, there were few props and just prep school uniforms for costumes. And it was a popular and critical triumph.

The brief run was extended twice to accommodate demand from festivalgoers. It took awards for outstanding musical and best ensemble. That success won Academy a berth at South Korea’s Daegu International Musical Festival where the workshop took the top prize for best musical against 23 other entries from around the world in July.

Mercurio and Kato made changes to the work before and after the Korea trip, including new songs.

And now the show comes back to the Maltz for its official world premiere. Now 90 minutes long, it features the core New York cast of nine actors plus one more hired from auditions for a future Maltz show. Another 11 local actors will portray the rest of the student body, and Kato hired a 10-piece orchestra.

Even though the authors were still tweaking the show last week, the themes of adolescents challenged by crisis remained intact throughout its development. ‘The rite of passage is something pretty timeless,’ said Mercurio, who believes the’show will resonate with many groups.

‘Young people can relate to it as breaking away from mom and daddy for the first time; grandparents can look back on what happened to their own children and even their own lives.’

“There’s that time when you’re a parent and you have to say, ‘I can’t do anymore for my child, I pray to God that they make the right choices, that people treat them well and I’m turning it over to the universe.’

That mirrors Kato’s feeling about his own dramatic offspring. ‘When I look at all the years, all the thousands of hours put into [Academy], we’re sending it out and wishing it Godspeed.’