Sex and the single senior: Sharon Gless opens up about new play at GableStage 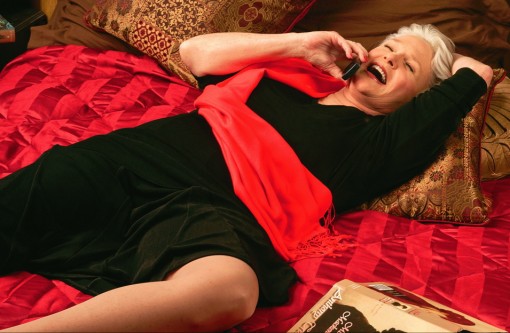 Sharon Gless is afraid ‘ an appropriate irony since her role in the play A Round-Heeled Woman is partly about not allowing fear to rob you of a fulfilling life.

Despite having acted on stage several times, the television icon is a bit unnerved at the prospect of talking about seniors having sex to live audiences at GableStage through January.

‘I have stage fright,’ she said, while drinking a Hendricks gin in the bar at the Biltmore Hotel. ‘On film, you can say cut, start over and do it again. But the fear is forgetting the words. I engage with the audience so much and this particular theater is very intimate.’

Then she chuckled at her own nervousness. ‘But Eleanor Roosevelt said you should do something every day that frightens you, and I think every woman in America should hear this story.’

Her anxiety dovetails with the play that she has championed for seven years. It tells the true story of schoolteacher Jane Juska who had not had sex in 30 years. Then she put an ad in the New York Review of Books that read: ‘Before I turn 67 – next March – I would like to have a lot of sex with a man I like. If you want to talk first, Trollope works for me,’ referencing the Victorian novelist.

Juska’s 2003 book and this subsequent play trace her comic and heartbreaking adventures as she moves from assignation to assignation.

Sitting next to Gless in the bar was Jane Prowse, who is both the playwright and director of this production.

‘It wasn’t just about oldies getting it on,’ Prowse said in a gentle British accent. ‘It was about going out into the world and getting what you want and not giving up on life. And that’s a universal message.’

As the two old friends finish each other’s thoughts, the sexual element and the empowerment element of the work seesaws through their conversation.

‘We couldn’t get anyone in America interested’ in producing it on television, Gless said with that rumbling sass familiar from Cagney & Lacey, Burn Notice and Queer as Folk. ‘I think it’s because we are a very Puritanical country. You don’t see women my age having sex on TV. It’s appalling. I don’t think it’s like that in England. They have Helen Mirren, Judi Dench, Maggie Smith, and they’re still all highly sexual on stage.’

Prowse chimed in, ‘I think America is led by the movies, which are a youngster’s medium and a beautiful women’s medium. I see how much people do to themselves to keep young and keep beautiful.’

Sex is both central to the theme and simply an example, Gless said. ‘That’s titillating to me and all those people who will go ooh-ooh-ooh. Older women do want intimacy, do want to have sex. Just like me. But Jane (Juska) said that if you want something, go after it, go get it. It’s never ever, ever too late and I believe that in my life and my art.’
She believes it to the point that getting this work produced became a crusade.

Gless relishes telling how the crusade started. She was quarreling with her husband, the producer Barney Rosenzweig, when he threw down a Sunday New York Times article he had been reading about Juska’s just published book.

‘He said, ‘If you had any balls, you’d go after this!’ He threw it on my desk and I was so mad, I read the article. I believe that things lead you to where you’re supposed to be and I was so thrown by her story. It just sang to me.

‘I just called my lawyer the next day, without reading the book. It took me a year to get (the rights). I was in competition with a major studio who also wanted it to make a feature.’

Reading the book reinforced Gless’ resolve. ‘To do what she did took tremendous courage. Her retirement forced her to realize how empty she was. A woman asked her (after the book was published), ‘How could you humiliate yourself ?’ And she looked at her, and said, ‘I had not been touched in 30 years.’ ‘

But then Gless was unable to get any studio interested in actually producing it, not even her Queer as Folk home at Showtime, which she thought might pick it up as a series with each episode an encounter with another man.

So on a trip to Europe, she gave Juska’s book to Prowse for a second opinion. Prowse put it in her luggage for a globe-trotting honeymoon. Weeks later, while whale watching in Mexico, Prowse remembered the promise and took out the book.

‘I absolutely loved it. First page I was hooked right in. I just thought, ‘Oh my God. Oh, my God. I hope to God that I haven’t left this too long and she’s sold this somewhere else. I got back to her right away, and I said, You have to make this book and I have to do it! I have to write it.’

Prowse said, ‘What I loved so much about it is Jane (Juska) has such a self-deprecating humor, and a great wisdom, great observations about herself and the human condition.’ The title is a tongue-in-cheek reference to a Victorian phrase for a woman of easy virtue.

It touched on feelings of worthlessness that come from loneliness. ‘She was looking for something very particular and quite small for herself and had no idea that she was seeking a universal question which was ‘What can we do to not feel like this?”

The first key, Prowse said, was how to handle what some people would see as a ticklish subject. ‘I knew immediately that the key to this subject matter was humor.’

The second key was something that was not dwelled upon in the book: Juska asking the blessing of her adult son, who she had been estranged from for 17 years.”I could immediately see that was the backbone of story,’ Prowse said.

Neither woman was thrown by the thought that Juska had not had sex in years. Prowse said, ‘She came out of a bad marriage.’ She just got very busy teaching and being a single mother and she put on a little weight, took uppers and downers. I think it just happens. I know women who would love to be in a relationship and 20 years go by and they still haven’t quite found out how to have it. Why hadn’t she had sex in 30 years? Because she just didn’t.’

With British producer Brian Eastman, the two women staged a reading of the play in London in 2009 and then did a production in San Francisco last January.

Audiences embraced it. ‘They loved having some authenticity about the subject matter because you never hear people talk about sex in relation to older people and what the difficulties are,’ said Prowse. She’added that a friend of hers ‘was in a very dark place and she couldn’t get over the loss of her husband.’ The play gave her the courage to resume her life. ‘She was stuck and she’s come unstuck.’

The play is being done at GableStage because Gless has lived part-time in Miami since 1993 and she could slip it in during Burn Notice‘s hiatus. She doesn’t go to theater often, but she does attend GableStage where she would chat with producing artistic director Joe Adler. They had met in London when she originated the part of Annie Wilkes in the world premiere of the theater version of Stephen King’s Misery in the 1992-1993 season.

Gless’s other stage appearances include Watch on the Rhine, Chapter Two, Cahoots and The Vagina Monologues. She had rehearsed in 1994 to appear in a play at the Coconut Grove Playhouse when she was sidelined by spiral meningitis.

Although Gless is the linchpin of the play, she’s not alone on stage. Her world is populated with local actors Antonio Amadeo, Steve Anthony, Howard Elfman, Kim Ostrenko and Laura Turnbull, some of whom privately praised her as a warm, down-to-earth professional.

Gless isn’t worried that her name or persona will distract from the play. ‘Maybe that’s what got them into the theater, but they get engaged very quickly into Jane’s life.’

She’s just concerned with that audience, still visible to her past the bright lights in GableStage’s small house.

But she and Jane have worked up a coping mechanism. As the play starts, Gless is having phone sex. She tells the other party, ‘I’ve never done this before. Do you think I’d do this in front of an audience?’