Estefans’ Inspiring Life Story Comes Back Home In A Musical 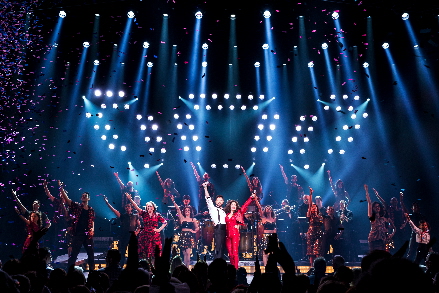 Gloria and Emilio Estefan once again are bringing it back home.

The national tour of On Your Feet!, an autobiographical Broadway musical powered by their iconic songbook, will open this week at the Arsht Center in their hometown.

The saga tracing their hard-won success as well as Gloria’s comeback from a crippling accident in 1990 is the stuff of local legend and the script has passing references to Miami touchstones such as radio stations and restaurants.

For the Estefans, the local run provides a special opportunity. 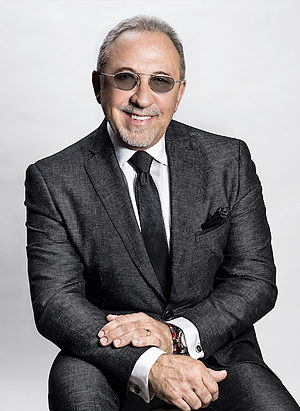 While the tour opened last month in that fabled center of Hispanic culture Buffalo, Broadway Across America and the tour producers are promoting the Arsht run Oct. 5-15 as “The National Tour Grand Opening.”

The show opened on Broadway in November 2015 to strong public support and respectful reviews. It played 780 performances before closing this past Aug. 20 after box office began to sag. But before that, it built a reputation for energizing audiences who ended up dancing in their seats and in the aisles during a mini-concert that closes the evening.

Many of the hands involved in the original production have shepherded the tour reboot including director Jerry Mitchell, choreographer Sergio Trujillo, even some of the original members of Miami Sound Machine as part of an onstage band.  Some of the more expensive and complicated visual aspects have been slimmed down a bit, but Estefan says he sees little difference. Indeed, playing a slightly more modest production in smaller houses like Shea’s Performing Arts Center in Buffalo is a plus.

“It’s a lot closer, and I think it made a difference because the reaction in Buffalo was better than New York. At the intermission, people kept dancing. It was a great thing. We got standing ovations. It makes it more intimate. The energy was different…. What is amazing to see, when you have an opening of a show (on Broadway) and you feel that’s it’s good? But now you have (even more of our) personality into the show.”

It’s still a Broadway musical with a script by former Barry University student Alex Dinelaris weaving the greatest hits into the storyline, such as “Get on Your Feet,” “Rhythm is Gonna Get You,” Turn the Beat Around,” and “Conga.” To fit a narrative hole in the story, Gloria penned a new song “If I Never Got To Tell You.” 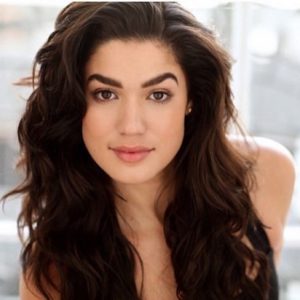 The only holdover in the cast is Alma Cuervo playing Gloria’s inspirational grandmother. But Gloria herself will be played by Christie Prades, a Miami native who understudied the lead role on Broadway and performed it scores of times there. Before that she was in the ensemble in Actors’ Playhouse’s West Side Story in 2016 and as Vanessa in the same theater’s In The Heights in 2013. The role of Gloria was a career-maker on Broadway for Miami native Ana Villafane who virtually duplicated Gloria Estefan’s persona. Emilio will be portrayed by Mauricio Martinez, a Mexican-based actor and recording artist, who performed his role for four weeks on Broadway.

The Estefans were instrumental in guiding the Broadway production almost from its inception. “When (producers) the Nederlanders came to me and wanted to do our life story, I told them I would only do it if me and Gloria had the final approval because I wanted it to be real.”

Indeed, the warts and all story may use them as the focus, but, for the couple,  the underlying theme is not so much about the Estefans, or Latinos specifically.

“One thing we want to accomplish is to inspire minorities and all people. Maybe people who were born here take it for granted, but we live in an incredible country (in which) any dreams can come true if you work. You have to be persistent, but have to work.”

The Estefans’ rags to riches story, depicted onstage, is part of the fabric of Miami lore now. But Emilio still loves to tell how the couple forged ahead with their unique salsa-based sound when record companies saw no mainstream future for their music.

“At the time, if you had a Latino last name (it was difficult). I remember going to Sony, there were times they would not even let me come into the building. And when they did let us in, we played it (the music) and they said, ‘Are you crazy? Who’s going to listen to this?’ They said, ‘Go back to your country; this is not your country.’ I said, ‘This is my country. This is who I am. This is what an American looks like. And they said, ‘You have to change your last name or we are not putting any money behind it.’ ”

The passion rose in his voice. “Me and Gloria, we are fighters. And to me, this play is not really about minorities, this is not about a Latino. I wanted people to know that when you believe in (something) you have to believe in it and fight for it…. People say,’ Oh, you’re so lucky and you’re so smart.’ I’m not smart. You know what I am? I’m persistent… Don’t let anyone tell you that you can’t do it.”

The result has evolved in a consistently busy and varied life. Last week, the couple left after the Buffalo opening for New York City where they were meeting with one of the organizations they work with. Then they were headed for Boston where they serve on the board of trustees of the Berklee School of Music. They stayed an extra day to hear a jazz concert featuring their daughter Emily.

Then on Monday, they boarded a special Jet Blue flight with other performers like Ricky Martin who brought food, water and other essentials to Puerto Rico.

“They are having a tough time there,” he said. “We have given already, things for the babies, but we want to go down and see the people. It’s important to keep the morale for the people so they feel they are not alone.”

And then back to Miami for Thursday’s opening.

This entry was posted in Features and tagged Christie Prades, Emilio Estefan, Gloria Estefan, On Your Feet!. Bookmark the permalink.