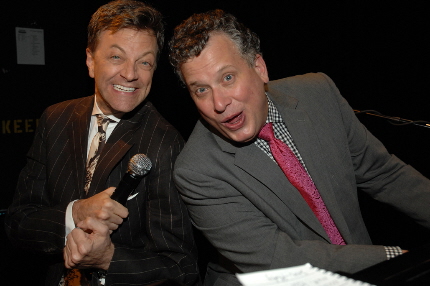 South Florida singers, especially musical theater actors, often seek a place to try out new material, a haunt where they can keep their chops honed, a venue to show off a range their colleagues might not suspect. Such opportunities are rare.

But two nationally-known cabaret veterans and a Florida-based producer are kicking off a series of such events in Delray Beach beginning Thursday and continuing four more dates through the spring.

Cast Party – a Monday night staple in New York City for 13 years – will set up shop for one night Thursday at the Fieldhouse in Old School Square beginning at  9 p.m. Patrons pay a $50 cover charge plus extra for drinks. The performers are admitted for free.

The first half of the evening is an hour-long set of American Songbook standards performed by Cast Party’s founders and stars, singer-emcee Jim Caruso and pianist Billy Stritch, the former musical director for Liza Minnelli and now working for Tony Bennett.

But the second half of the evening is an open mike for virtually anyone to perform, although the project targets South Florida theater actors, said producer Mark Keller.

“They can try out new material, try out something the love or try out something they haven’t yet been cast in that they would love to be cast in, like a dream role,” Keller said. “And it also gives them the opportunity to perform and share the stage with internationally known Jim Caruso and Grammy Award-winning Billy Stritch.”

Keller has put up posters about the opportunity at area theaters like the Wick where he hopes performers in Sister Act will come to the venue after their curtain calls.

Performers can simply show up if they bring sheet music or a chord chart in the right key for two numbers for Stritch to play. But they can also contact Caruso ahead of time by emailing him at caruso212@aol.com. He only asks that the tunes “be upbeat. No dreary ballads. It’s a party.”

Caruso said, “People put themselves on the line literally. It’s invigorating. The theater community is made up of smart, funny, talented people with great senses of humor and fast minds and they love pop culture. To be in their presence is a constant joy. This isn’t just a job to me, it’s almost like community service.”

The uncertainty electrifies the evening, said the ebullient Caruso. “We have no idea what’s going to happen. It’s like being on a high wire.” In New York, the talent can be major Broadway names like Chita Rivera “or a 94-year-old tap dancing grandma or a hula dancer. It can be a little bit Ed Sullivan or American Idol.”

Keller, who has been producing theater and concerts in New York and around the country for 21 years, brought the program to the Crest Theatre in Delray Beach five years ago. But he now has the exclusive rights to produce the shows around South Florida.

The Fieldhouse, which has been retrofitted with better acoustics is located 51 N. Swinton Ave. near the corner of NE 1st Street and NE 1st Avenue.

“Celebrating new talent is absolutely necessary to the growth of the arts!  In an age where budgets are being cut right and left, we’ve been so proud to be able to shine a spotlight on thousands of up and coming singers and songwriters…to say nothing of the more established performers,” Caruso said.

He sounds jazzed at the prospect. “We feel very lucky to surround ourselves with talented people. That’s a great gift.”